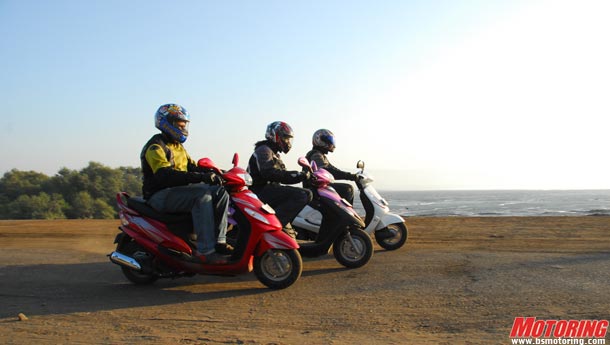 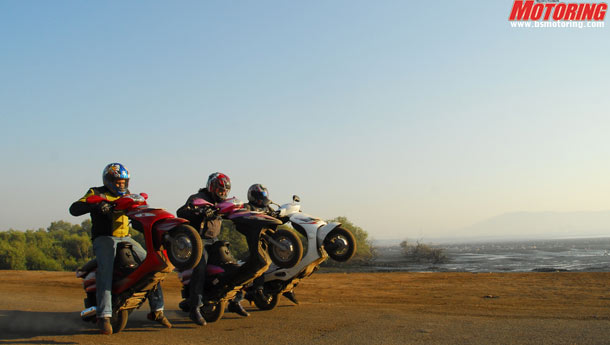 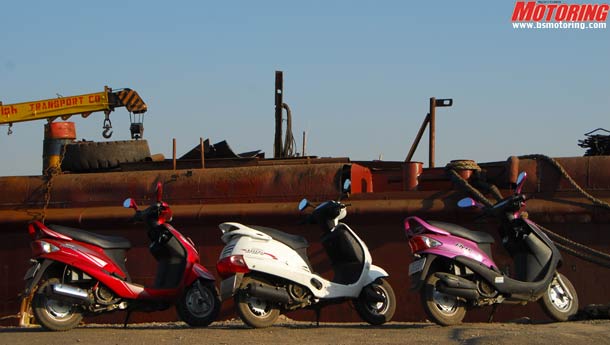 When you turn up at a gas station, and the attendant instinctively reaches for the diesel spout, you know you're rolling up in a Mahindra. But in this case, 'on' a Mahindra is most apt.

With Mahindra buying out Kinetic Motors entirely along with the 'welcome' door mat, old news that it is, they've launched three models under their '2 Wheelers' brand name. Called the Duro, Rodeo and the Flyte, they are all powered by the same 124-odd cc four stroke engine. Now wait a minute. Doesn't the name 'Flyte' sound a tad familiar? Well it should, because just before Kinetic Motors went up on ebay, they had launched the Flyte, a scooter produced in collaboration with the Taiwanese scooter manufacturer Sym. That symbiosis now continues with Mahindra 2 Wheelers.

It's been a while since Mahindra launched their two wheelers. But these guys love their scoots so much that getting them to lend us the bikes for a day was akin to asking for the use of their HQ for a rave party. But somehow, the clouds parted, a tractor beam emerged from the heavens and left behind the Duro, Rodeo and the Flyte. Yes, miracles do happen. Sometimes.

Okay, so many people are under the assumption that scooters are for old grannies and garter-wearing guys who seemed to live most of their school lives stuffed away in their dorm lockers. But hey, think again. Mahindra is out to re-invent the nothing-between-the-legs two wheeler image, with the words 'Power Scooter' emblazoned on the side panels. And to drive that in further still, I'm sure you might have caught the ads on the telly. Yes, the one that depicts a rather terse looking bloke who can apparently escape gravity on a whim but chooses not to, for some reason or the other.

All that might seem great in the ideal world, but riding a pretty pink Flyte certainly didn't do much to Kartik's machismo. The white Duro worked for Aneesh, while the red Rodeo shouted 'metrosexual' to all those who bothered looking in my direction. Looks-wise, the Mahindras have the same lines as they used to when they were built by Kinetic. The Rodeo is essentially a Flyte with a front mudguard that pivots with the wheel, and the Duro is a clone of what Kinetic badged as the Nova. All new scooters? Er, not really, then.   Three scooters, one engine - does it really make sense? Well, plenty, actually. One common engine means the same lot of spare parts for all three models. This brings down costs tremendously and logistics and inventory instantly become leaner and more efficient than dabbling with half a dozen motors and sending their whirly bits across the length and breadth of the country.

All of that sounds convenient to the manufacturer, but you actually profit as well. That's because the 125cc, 8 bhp motor is a bomb on the go. It's snorty and grunty and will blow the house down. Acceleration is brisk (for exactly how quick, wait for the road tests) and the engine loves throwing its piston up and down to very high rpms. Torquey and punchy as it may be, the motor's wings feel a bit clipped in the Duro. Although the Duro weighs in at 105 kg, about a kilo lighter than the Rodeo and Flyte, it tends to feel slower in comparison. That could be attributed to the Duro's riding position. The rider sits more upright, with the bars a tad higher-placed than on the other two Mahindras. I thought it was just me when my right arm began to ache while riding the Duro, but Aneesh and Kartik said the same thing.

Build quality is iffy. Although the Flyte and Rodeo seem to be better put together, the Duro's panels have uneven gaps between them. Plastics seem dowdy on the scooters and this is most apparent around the Rodeo's instrument console. When it comes to longevity, I think the mechanicals will age slowly and gracefully, while the rest of the bike might shake itself loose much earlier.

Bountiful gizmos on the Mahindras, like a charging point for your cell phone and mp3 player, might appeal to some people. Sure, it's convenient and all of that. But the thing is, do they make positive tick marks in a potential buyer's list of wants and expectations from a new scooter? I think not. A good quality and well-built scoot, with a great performing and reliable engine, is what most people want and a scooter that sings along with you, or tells you the time just won't cut it.   Which brings me to the instrument console on the Rodeo. An all-digital design, the unit is futuristic to look at. A nifty tachometer surrounds the circular read-out panel, which incorporates a trip meter, clock and odometer in addition to the standard speedometer. Oh, and lest I forget, the entire thing changes colours, colours which you can choose, by the way. What deserves mention here are the mannerisms of the speedo. On the go, and above an indicated 70 kph, the meter went all loony and displayed all sorts of arbitrary figures. The readings kept varying between 80 to 95 kph and would keep changing abruptly, despite my steady throttle inputs and no change to the inclination of the road. It's like the thing wanted me to pull out a calculator and work out the arithmetic mean to simply gauge the pace I was riding at.

Small wheels are great for agility, which the Mahindras have tonnes of. Sifting through traffic is easiest on the Rodeo and Flyte. Having said that, it doesn't mean that the Duro rides around like a half-track - far from it. It just takes a little more effort to get about, especially when compared to the other duo. But all that nimbleness endowed by the small rollers comes at a price – lack of sure-footedness and a harsher ride. Low diameter wheels will catch even the smallest of ruts and imperfections on the road. So, if you're going at it like the devils are nipping at your heels, it can get quite scary on anything but mirror-smooth roads. Unfortunately, the trailing-link front end of the Duro does little to help.

It's a good thing that the Rodeo and Flyte have been shod with telescopic forks at the front, but they aren't exactly the best in the business. If you're going to assume that they protect you from  potholes as they do on motorcycles, think again. Go flat out over one of those expansion joints on flyovers, and you're thinking 'Wow! That was fun'. Then the next one hits you, and you're wishing you were sitting at home instead. Feedback from the forks is tremendous and actually, they relay so much to you that it can get jarring at times.

What the Mahindras really need are a good set of brakes. The drums, technology from the Middle Ages, are simply inadequate. Summon them with urgency and they'll kick in with the efficiency of a government office. Also, thrash them a couple of times and they'll fade almost instantly. This isn't good news, really. Plonk in a disc brake and matters will improve radically. Besides, discs aren't very expensive in this day and age and that makes this compromise even harder to digest. Space is in plenty on all three scooters, and this includes the under-seat storage as well. Enough for Farmville, and they'll  easily swallow a full-size half-face helmet plus some more; the scoots excel in this department. Footboard space is more than adequate.

Prices are about the same as the competition. Ex-showroom Mumbai prices for the Rodeo, Duro and Flyte are Rs 41,299, 38,299 and 38,999 respectively. And remember, these things burn petrol, despite whatever else the pump attendant might tell you!