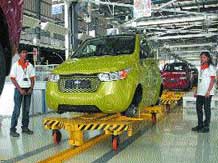 Mahindra Reva Electric Vehicles Pvt Ltd, a part of the $15.9 billion Mahindra Group, on Tuesday announced it would launch its next generation electric vehicle, the e2o, on March 18, 2013, in New Delhi.

The Mahindra e2o was unveiled at the last Auto Expo in New Delhi in January 2012.

The Mahindra e2o is the next-generation global electric vehicle built on the capability of using the futuristic ecosystem of Sun2Car to derive energy from the sun for urban mobility while protecting and preserving the environment. The car will use next generation Lithium Ion batteries and will have a range of 100 kms on a full charge, which is suitable for most urban commuters on Tuesday.

The e2o will enable users to carry out self-fuelling through any 15-amp plug point at home or at their workplace. This can be further augmented with the help of Sun2Car solar technology.

The e2o will be produced at Mahindra Reva’s recently-inaugurated production facility in Bangalore. It has a rated manufacturing capacity of 30,000 cars per annum.

The company has also set up electric vehicle charging infrastructure in Bangalore city in association with State Bank of India and shopping malls. It has set up rapid charging stations at 100 places in the city to help car owners to rapidly charge their electric cars.