Until the beginning of 2010, Mahindra & Mahindra had an enviable market share in the utility vehicles category that rivalled Maruti Suzuki's share in the overall car market. The company's rugged on- and off-road utility vehicles such as the Bolero, Scorpio, Xylo and XUV5OO attracted buyers in rural and urban markets alike. But in the five years since, the dynamics have changed quite a bit.

For one, Maruti Suzuki broke into this domain with a family mover called Ertiga. French car maker Renault, a one-time partner of M&M, pitted the Duster directly against M&M's Scorpio. Last week, it took the covers off its own public carrier, the Lodgy. Japanese companies haven't lagged either. Nissan launched the Terrano SUV, while its low-cost marque, Datsun, launched the Go Plus. Honda introduced the Mobilio and Ford created a new segment with the EcoSport, a compact SUV.

These new products not only expanded the utility vehicle segment, but also weakened M&M's stranglehold on it. On March 31, M&M's market share in this segment stood at 34 per cent, down from 55 per cent in 2010, according to the Society of Indian Automobile Manufacturers. During the same period, the market share of Maruti Suzuki in the overall car market slipped only to 45 per cent from 50 per cent.

In the past three years, Maruti Suzuki has had six utility vehicle launches to M&M's one: the new Scorpio built on an all-new platform. To make matters worse, some of M&M's offerings like the Quanto, Xylo and Thar have slipped below the radar of prospective consumers. Xylo, for instance, was launched to challenge Toyota's Innova, the market leader in its segment, but after a promising start, its sales have withered away.

"M&M seems to be where Maruti was 3-4 years back, i.e. when heavy competition in its bread and butter segment was upon it," noted Ashish Nigam and Ronak Sarda in their Axis Capital report. "While Maruti proceeded to withstand competitive pressures extremely well, the stock was under pressure till it proved its mettle. We now foresee the same happening with M&M."

To arrest this slide, M&M is readying a bouquet of launches this year. To begin with, it will launch a new soft roader, a sports utility vehicle, to take on the Ford EcoSport. This will be followed by the launch of another compact utility vehicle that will complement the Scorpio and Bolero. In fact, a Bolero version with a major facelift is already in the pipeline, and mid-life revamps are planned for other existing models too. With 6,500 units selling every month, mostly in rural markets, the Bolero is the backbone of the company's utility vehicles business.

Fuel of the future
A crucial step for M&M will be its entry into petrol-engine manufacturing. Barring a variant of the Verito sedan, almost its entire portfolio employs diesel engines. The company has worked with Austria's AVL to develop a new petrol engine for its new compact SUV. With an engine size of less than 1.2 litre and its overall length under four metres, the SUV will benefit by falling in the 12.5 per cent excise bracket compared to the 30 per cent that the Scorpio attracts. This will allow M&M to position the compact SUV as an affordable, entry-level vehicle. 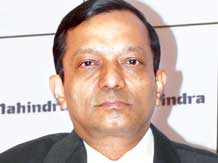 "There is no doubt that the way fuel prices are going, the difference in diesel and petrol prices will continue to become narrower and there will be a shift from diesel to petrol cars," says Pawan Goenka, executive director, M&M. Compact SUVs will become predominantly petrol-driven, while larger SUVs are likely to stick to diesel. "When we launch a compact SUV or anything else in the future, we will always come out with an equally good petrol option," says Goenka. M&M had earlier converted the Scorpio's 2.2-litre diesel engine into a petrol one for the export market, mainly in Europe.

Amid all this, M&M's competition is already preparing for round two. Hyundai, Maruti Suzuki, Tata Motors, Renault, General Motors, Honda, Toyota Kirloskar, Volkswagen, Fiat and Nissan are all either working on their products in the compact SUV space or are charting new marketing journeys. And M&M is aware of this. "Three years ago, a person walking into an M&M showroom had more or less made his decision on making the purchase," Goenka had said in an earlier interview. "It used to be just a matter of (discounting) a couple of thousand rupees and the deal was done. But today he comes to the showroom to check out the product first, because he knows there are other competing products."

Goenka knows that the next 12-14 months will be crucial because M&M wants to launch more products than it ever has in a similar period earlier. "The important thing is to watch how well these products do, and that will depend on how we are able to price it," he says.

Stylish compact SUVs are expected to become the preferred choice of consumers who do not want to settle for a hatchback, yet do not want the hassle of driving and parking a burly SUV in urban traffic. Both Hyundai and Maruti Suzuki have launches lined up for later this year. While the Maruti SUV will be a sub-four-metre car, the Korean SUV will be bigger. Honda, Tata Motors and Volkswagen could follow suit next year.

"The utility vehicles segment is expected to outgrow the passenger vehicle business over the next 3-5 years," said Jinesh Gandhi of Motilal Oswal in a recent report. "However, growth is expected to be driven by increasing acceptance of compact SUVs by car buyers, while traditional UVs (M&M's forte) could show cyclical recovery in volumes."