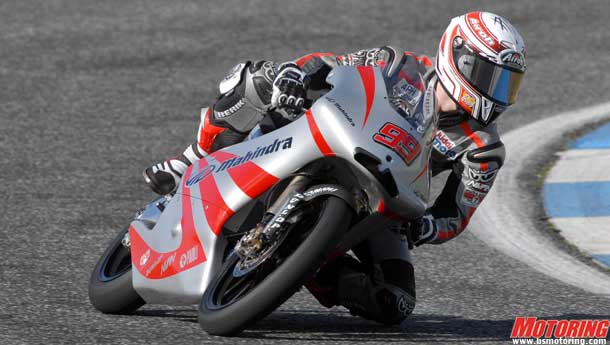 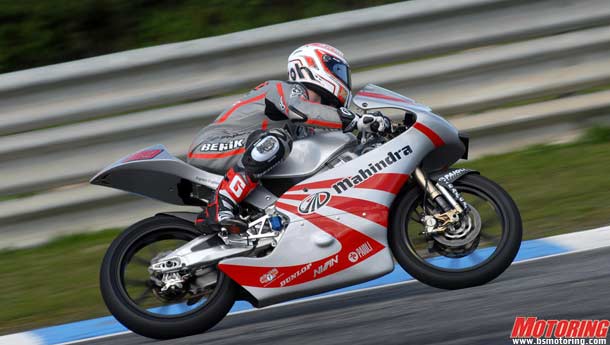 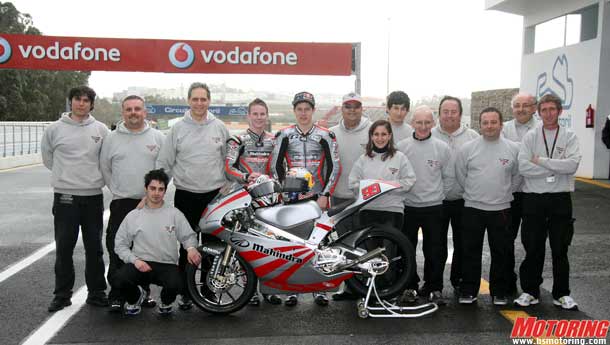 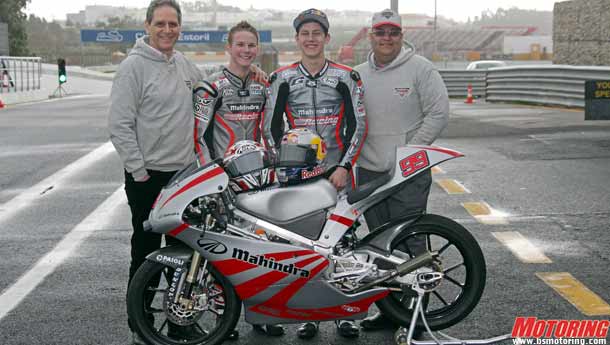 Mahindra Racing’s official bike, the GP125 took to the track for the first time in its corporate colours today at the final day of testing at a predominantly wet, windy and cold Estoril circuit in Portugal.


The Indian team was present with riders Danny Webb and Marcel Schrotter as well as Team Principal Mufaddal Choonia, who made the trip from Mahindra Corporate Headquarters in Mumbai to see the bike in action.


The GP125, designed and built by Mahindra’s own Italy-based Engines Engineering, ran for only a handful of laps in its silver and red livery before the team switched back to plain black for testing duties.

Speaking on Mahindra’s participation in the MotoGP Championships, Mr. Anand Mahindra, Vice-Chairman and Managing Director, Mahindra Group, said, 'It is a matter of great pride for us to be the first Indian motorcycle manufacturer to participate in the world’s most prestigious motorcycling event. MotoGP is the ultimate test in motorcycle racing and an immensely popular event with an extremely loyal fan following. Mahindra motorcycles will compete with the best in the world and it will be an ideal opportunity for us to showcase our strengths in the engineering and IT domains.'

'Today was very special for me as I saw the bike on track for the first time in Mahindra’s colours and I am happy to say it looks good,' said Mr Choonia. 'It was a difficult test as the weather conditions were very poor for testing, but the laps we managed were very encouraging and built on the progress we made in last week’s three-day test at Valencia.'

The Mahindra Group is the first Indian motorcycle manufacturer to enter a team into the prestigious FIM Road Racing World Championship and taking to the track today with the GP125 in its corporate colours was 19 year-old British rider Danny Webb.

'The weather really was awful in Estoril, and about the only time we had a clear sky was when I went out with the silver and red,' said Danny. 'The bike looks mega and the colours really stand out so I’m happy about that. Valencia was good as I got to know everyone in the team so we were able to move forwards here despite the bad weather.'

Marcel Schrotter was also dodging the rain to get some kilometres under the wheels of the GP125. 'It was a good feeling riding the bike here and in Valencia,' said the 18 year-old German. 'Everyone in the team is working well and we’re making good progress. The bike looks great and everything is in place to develop it to my riding style. If we get some good dry running in Jerez I am confident we’ll be well placed for Qatar.'

Mahindra Racing will next be in action at Jerez in Spain for a three-day test on March 4-6 ahead of the season opening round as part of the Qatar Grand Prix on March 17-20.