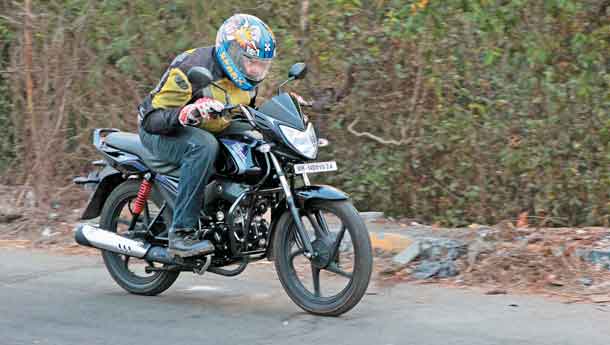 This motorcycle marks the debut of the new range of bikes from Mahindra 2 Wheelers. The last one might not have gone according to expectations, so this bike had to check a lot of the right boxes. Which it does.

The styling of the Pantero is different and what sets it apart is the fact that the design could be termed as mildly controversial. You either like it or loathe it. There’s no middle ground, and that works for me. Quite frankly, I’m sick of motorcycles that carefully tread on the middle lane, which is really boring.

Swing your legs over the Pantero and the first thing you notice is that the saddle is expansive. Mahindra claims that it is one of the largest in the segment and there’s no doubt that it will hold two individuals with space to spare, which is where the potential problem could arise. You see, us Indians have maximisation running in our blood and sometimes it’s for the wrong reasons. Across the cities and highways of the country, three people, or sometimes more, zipping along on one motorcycle is a norm. Hopefully, regard for safety will prevail before any more losses of life.

Mahindra, it seems, has kept semi-urban and rural India in mind while designing the  Pantero. Why I’m confident of this is because of the way the suspension has been set up. Over the rough stuff, the suspension soaks up the bumps like they don’t even exist and when the throttle is pulled in to the stop, it handles the Pantero’s pace with aplomb. Any faster, however, and the suspension definitely will feel a tad too soft.

The instrumentation is digital and easy to read, but the cheaper variants get analogue clocks. The tachometer on the Pantero is a neat touch, which many motorcycles in this segment have to do without. And the LED pilot lights are another knick-knack not common in the commuter segment. It is good to see these things trickle down to the lower displacement motorcycles, but one thing the Pantero does need is an engine kill switch.

And the other thing is a disc brake up front. The rear brake is fine, but for most situations, the front drum is just not up to the task of slowing the bike down. The feel is dead and the brake fades quicker than a reality show’s popularity. One of the finer attributes of the Pantero is its neutral handling. Flickable in traffic and rather stable in a straight line, the Mahindra holds its line quite well when squeezed through a corner. Choose a line, pitch it at the kink, gently throttle in, and if you’ve done it right, you’ll be across as if nothing ever happened. The sticky MRF tyres certainly help in this regard.

The 107cc motor too is worthy of mention. The mill is relatively refined and tends to make its power at mid range revs. Things get exciting only past 2,000 rpm and the party continues till about 7,000 rpm. Anything past that, and the engine gets too vibey for its own good and anything below warrants a downshift or two to keep it on the steam. The sprint from standstill to 60 kph clocked 9.1 seconds, while the pinnacle whack was achieved at just over 92 kph.

Slotting the all-up gearbox to find the required cog is a cinch. But these all-up, (or all-down, for that matter), gearboxes always tend to give you neutral when all you really want is the first darned gear during an episode of frantic gear changes. Which brings me to the question, why don’t the manufacturers just standardise the pattern and stick with it?

Build quality is decent but certain bits could have been made better. On the whole, however, the Pantero should be able to take a good amount of abuse and you might have to contend with some rattles at worst. Prices begin at Rs 44,690 while the variant we tested will set you back by Rs 48,990 (ex-showroom, Chennai). This is a bike intended for those who want a serious commuter with some embellishments. Tyre scorchers stay away, for the Pantero is definitely not for you.