While most carmakers have announced price hikes across their model range, Mahindra and Mahindra is offering heavy discounts on the SsangYong Rexton, Quanto, XUV500 and Bolero models. But from April, Mahindra too will join the price-hike bandwagon. 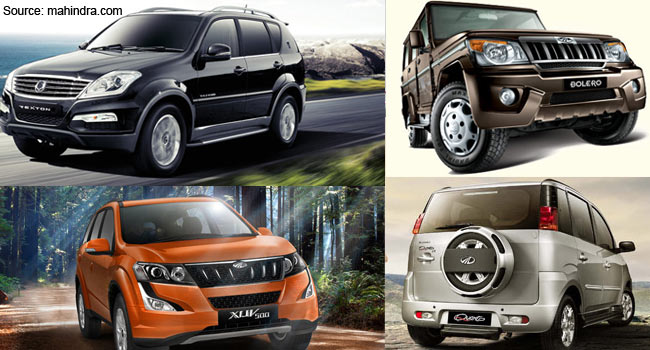 SsangYong Rexton, the premium SUV from the Mahindra-owned Korean manufacturer is offered with a sizeable Rs. 2.1 lakh discount. It is powered by a 2.7-litre, five-cylinder diesel engine, and can be opted with both manual and automatic gearboxes. The automatic variant gets an AWD system too. Prices for the Rexton range from Rs. 23.68 lakh to Rs. 25.77 lakh (ex-showroom, Mumbai).

Mahindra Quanto, the company’s first sub-four-metre offering is about to get a major overhaul, and will be launched as the Nuvosport on the April 4. However, the pre-facelifted model is up for grabs with a price-cut of Rs. 1.35 lakh, which is quite steep, given that the car is priced between Rs. 6.91-Rs. 8.47 lakh.

Mahindra XUV500, the stylish and feature-packed vehicle received a mild facelift towards the end of 2015, and has added a six-speed automatic gearbox to its kit-list. The SUV offers AWD on both its manual and automatic gearbox equipped variants in all states except in Delhi.


Mahindra Bolero, the spartan and rugged people mover is being offered with a price-cut of Rs. 70,000. It is powered by a 63bhp 2.5-litre diesel engine. A brand new Bolero will set you back by anywhere between Rs. 7.71-7.86 lakh.