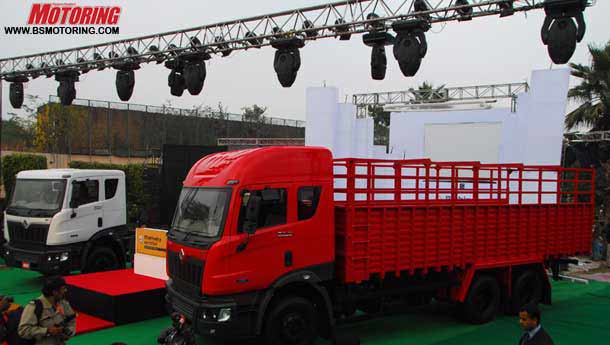 Mahindra Navistar Automotives Limited (MNAL) a joint venture between Mahindra & Mahindra and Navistar International announced the 100th roll out of its  25-tonne-capacity multi-axle truck MN 25 at Chakan while looking at launching the trucks for sale in the next quarter.


"The investment done for Mahindra Navistar trucks is Rs 1000 crore out of which Rs 350 crore was done for engine manufacturing while the remaining Rs 1300 crore was done on trucks. Work is in an advanced stage on the soon to be launched CNG variant. We have priced our product very aggressively and I think it is marginally higher than its competitors. Currently our installed capacity is 50,000 units for trucks," Pawan Goenka, President, Automotive and Farm Equipment Sectors, M&M Limited told reporters on the sidelines of the press conference.

Even though auto sales numbers may be on the rise, the industry is facing a components shortage. Confirming this, Goenka added, "Whole of the auto industry is facing a component supply crunch in mainly three areas, tyres, casting and fuel injection equipment. The demand is soaring but the capacity cannot be increased quickly. Around 5-7 per cent of a decline in output has occurred because of this."

MNAL also has export plans on cards for its trucks which will initially happen in neighbouring countries. Reportedly, according to the JV, the trucks are for sale in all parts except North America including South America, Africa, Europe and Non-European countries and even designed for such markets. The company will also look at launching a left-hand-drive and has planned a ramp up in exports by the financial year of 2012.

Other variants in the same offering like MN 31, 40, 49 and Tipper will be launched in this financial year. Mahindra Navistar is in the process of creating a customer-centric network of exclusive dealerships across the country. Moreover, Mahindra’s already existing network will be deployed for servicing the customer needs. MNAL has a network of 50 dealers to be scaled upto 150, 60 additional LCV dealers (light commercial vehicles), along with 400 outlets of RSAs (road side assistance) which will be increased to 900 within a year's time.

This will be clubbed with 24x7 multi lingual in-house expertise and a panel of expert drivers, trainers and trouble shooters at the company's headquarters.