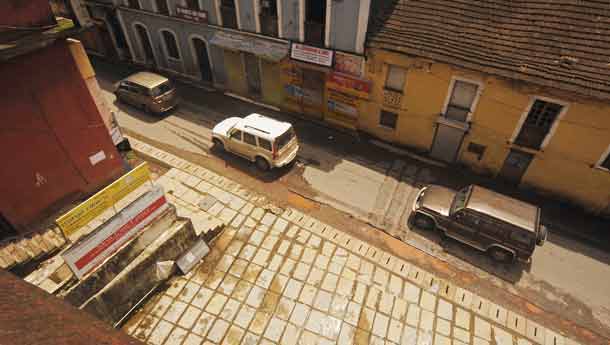 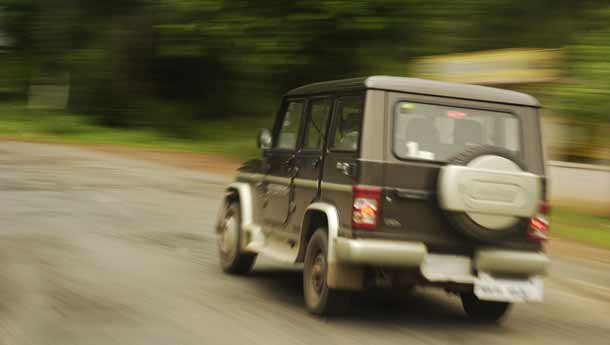 Leg 2: Goa-Mangalore   It was a beautiful setting. The sun was making its way into the sea, peeping every now and then through the dark clouds that filled the sky.   The playful waves washed away the footprints that our feet had left behind on the golden sand. Too bad I couldn't see a thing because the Bolero was kicking sand into my eyes as we tried to push it out of the ditch it had dug for itself. The beached Bolero made whales proud and took the last ounce of energy out of us, proving to be as difficult to rescue as the giant aquatic mammals. A beached Bolero on the beach. Heh heh. While the main event went on, the side show was a mini riot among the 20-odd fishermen who had gathered to watch us dig away at the sand with our bare hands. Apparently, someone had insulted someone's first of kin, maternal second cousins and twice-removed paternal granduncles. And even as Joshua inadvertently delivered an almighty scoop of sand right at my face, he found the time to impart an uncharacteristically short pearl of wisdom. 'Such is life.' Indeed.   It had been a long day. Goa was left behind in a heap of empty breakfast plates and a lone Srini waving us goodbye, trying hard to conceal his delight at watching us go. To this day he won't divulge what happened in Goa after we left. Anyway, we got out of Colva and onto the road that would take us into Karnataka and towards Mangalore. I'd never been on this stretch of NH 17 before and I was eager to see what it had to offer. As Bijoy was already sitting in the Bolero and Joshua had plonked himself in the Scorpio, I found myself piloting the Xylo, easily the most comfortable car of the trio and the only one that would play the music from my USB drive. The hulking Xylo made short work of the narrow Goa lanes and we were on the highway before we knew it. I'd expected the road to be similar to the smooth stretch from Mumbai to Goa, but it was not to be. The roads were good as we began the day, but the Mahindras' tyres gradually began to trample increasingly wayward surfaces.   Soon, we were on WRC-style rally stages and boy were we glad that we had the Mahindras for company. Any other car driven the way we did would have to be taken back in the back of a truck for sure. The road looked like it had been continually bombed and the rain seemed to know that this was a Monsoon Challenge drive, and it obliged. Bijoy was setting the pace at the front of the pack and I was just about managing to keep up, while I could see Joshua flying from one rear view mirror to the other as he tried to find the smoothest path across the moonscape. I had another approach - keep the wheels straight and gun it - and I must say it was the most fun way too! The Xylo took the abuse extremely well, and its off-roading capabilities seem to be a notch above the competition. Time for a 4X4 version, I think. Now there's only so much one can take of watching others have all the fun, and when Bijoy offered me the Bolero during a brief stop, I was behind the wheel before you could say 'bad roads ahead!' The Bolero's Jeep roots shine through on the rough stuff, and how! It was tons of fun on the undulating road surface and I could just plug it in fourth and rumble over anything that came in my way. Alright, it only has a CD player in which I was forced to listen to the CDs that Srini had left behind (threatening us with dire consequences if anything happened to them), but since the car was so much fun to drive, it didn't matter much. If nothing, it was at least good practice for our forthcoming slush fest! Or perhaps the Raid de Himalaya?   Soon , it was time to switch again and the Scorpio with mud plastered on its white paint looked rather purposeful and inviting. We were driving at a relaxed pace through a twisty section and as we went around a smooth right-hander, the trees lining the road vanished and in their place a magnificent beach with huge waves filled our eyes. As I braked to a halt, I saw Bijoy already taking to the sand and we followed suit. While the photographers were busy releasing their shutters, I went down to the waterfront and on either side the beach stretched for as long as I could see. It appeared as if the whole world had turned into a beach. Just as I was about to embark on another introspective session as often happens when I'm standing near the sea, I heard the roar of an engine and tyres wailing for grip. Running back, I was greeted with the sight of the Bolero stuck axle-deep in the sand, its rear wheels spinning away.

So it began, the arduous task of digging the Bolero out with nothing but our fingers and trying to rock the car out of the sand. But all we managed to do was get it stuck nice and proper. A bunch of fishermen, who had no work thanks to the monsoon, came up to us and offered to help us out in exchange for 600 bucks. That attitude was not received well by us and Bijoy politely refused. We went on trying to dig the car out with the fishermen watching, but were really weren't getting anywhere. After around half an hour, the fishermen were back, perhaps out of pity, and they said that they would get the car out. So, all of them gathered around the car and lifted and pushed until the Bolero came unstuck with a mighty lurch and barrelled up towards the comforting tarmac. And the fishermen got what they wanted too; no doubt they would have partied that night! After that, it was just a matter of getting to a hotel room and under the shower to wash off all the sand that covered us from head to toe. It was a chilled-out drive with the windows down to Mangalore and Siddarth and I spent it talking about all that had happened during the eventful day. Watching tree tops sway by from the passenger seat while listening to music, driving in pitch black darkness, eating local cuisine, laughing our heads off as the odd wheelcap launched itself into the sky as the wheel went through a crater, wishing the others were there too, avoiding motorists who either wanted to die or kill us, wishing that the beautiful vistas would stay with us forever, marvelling at Joshua's and Aman's non-stop talking prowess; these are just some of the things we did as we headed against the monsoon winds to the south. This was definitely the most fun leg of the journey, but if you want the most challenging one, turn the page!