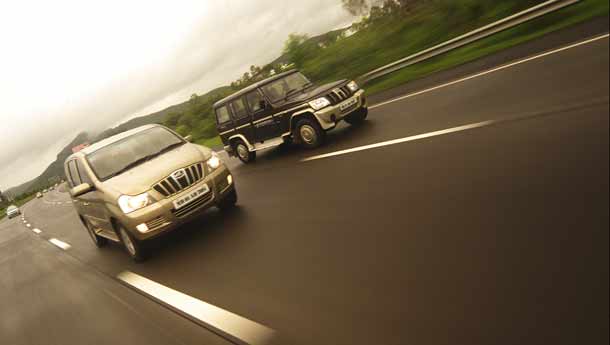 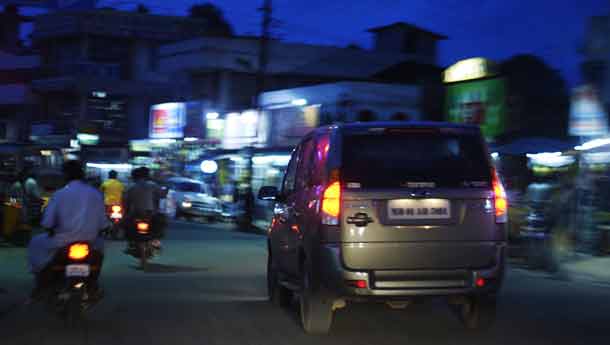 Leg 3: Mangalore-Kanyakumari   Maybe someone up there decided that I had to stand in a courtroom on July 14, 2009.   There I was, pleading to the judge that all the paperwork in the three Mahindras was perfect, though they had not been attested as required in the mighty state of Kerala. The courtroom was a converted Tata minibus and I was directed to the ‘mobile court’ by an adamant lady police officer who was bent on wasting our precious time. We had close to 700 km to cover on that day and that too in traffic conditions that may aptly be called God’s Own Holy Mess. To cut a long one short, I convinced the judge successfully that the interpretations of the Motor Vehicle Act vary in different states and he let us continue our encounter with the mighty monsoon. But there was a slight problem. There was no rain.   The elements that make up the backdrop to the monsoon were there – the sky was silver grey, the air was moist, the trees had sagging branches and there were droplets on the windscreen almost all the time. But as someone who hails from Kerala, I know what a proper monsoon shower is when I drive into one and, honestly, the sheets of rain made up of heavy drops of water were sorely missing.   The day had started early for the Monsoon Challengers. Cellphone alarms worked overtime to ensure that the cars left Hotel Prestige in Mangalore at the stroke of six. Mangalore town was still yawning and stretching its limbs as we gunned the powerful diesel motors towards Kasargod and the famed Malabar coast in Kerala. We knew it was going to be a very long day yet we were not in a mood to overlook the sea bastion of Bekal fort (Bollywood fans would remember the scene in the movie Bombay, where a rain-soaked Manisha Koirala runs towards the hero and the camera… it was filmed at Bekal). This is the largest, most well maintained and accurately restored piece of history in Kerala. Bekal has documented history dating back to the 12th century AD, though the fort, as we know it today, was built over the last five hundred odd years. I will briefly state that the fort was built and maintained by the Keladi Nayaks (circa 1565) and later on, was captured by the Mysore Sultans. After Tipu Sultan died fighting the British, the magnificent fort was taken over by the English East India company in 1799. The rest of the history, ladies and gentlemen, let me direct you to Google.   The point is, Bekal, as much as it is a vantage position to keep a watch on the invaders coming by land and sea, is also the best perch to watch the monsoon wade into the Indian subcontinent from the turbulent horizons of the Arabian sea. Around us, the canopy of coconut tops swayed to the strong, consistent breeze. The sea was so furious that its waves were destroying themselves against the rocks rather than lapping them. And the polygonal fort built using laterite blocks stood proud – a strong and silent monument indeed and a veteran of many a monsoon, I thought, as I cranked the key of the Xylo to lead the Challengers.   I have only one tip for driving in Kerala and that is ‘DON’T’. The monsoon plays havoc on the roads and the gutters on the road can be seen from the Moon (At this point, let me assert the importance of having a fleet of vehicles that has brilliant off-road cred, and all three cars – the Xylo, Scorpio and Bolero – took on the roads with gusto). Apart from some small stretches, the national highways (both NH17 and NH47) are abysmally narrow, leading to close encounters with private buses wearing psychedelic paint jobs every now and then. But more than the road, it is the road users who are to blame. Small car drivers are insane in their overtaking attempts, bus drivers try to trample you by being inches away from your hatchdoor and motorcycle riders, I am certain, leave a note at home every time they leave home. I know, it is my very state, but I will be lying if I say that things will improve soon.   So we dragged along to pass the Pondicherry-administered, erstwhile French colony of Mahe and onto the chaos and utter confusion that Kozhikode is. A predominantly Gulf economy means that the streets are littered with luxury cars and vans and there were hoardings that announced yet another NRI meet. As we moved on to the temple town of Thrissur and then onto Edapally where the NH17 ends, the roads started to clear up. The speed of the convoy got better too, with the Xylo leading at a steady 80-90 kph with a nice compilation playing from the pen drive. One moment it was Bryan Adams and Eighteen Till I Die and the next it was REM and Losing My Religion and filling the void in between was Kid Rock with his version of Sweet Home Alabama. Cannot get more eclectic than that, can you? But the songs were just like the road trip we were on. One moment we were a happy bunch taking the rains head on, the next we were introspective and wondering what we were up to, and then we were celebrating the recent past. Destination was not, and should not, be important for any road trip – it is the people whom you travel with, the machines that haul you and the sights and smells that you encounter that make it.

But destination was important this particular day because I was heading home. I knew every inch of the road that I was driving on and it was leading to my parents who were waiting for us to arrive. It was not necessarily country roads, but it was certainly taking me home, to Thiruvananthapuram. Needless to say, we reached home to a happy reception, warm tea and clean beds. A five-hour rest and after a breakfast that only my mother can cook, we were headed for the last stretch – to Cape Comorin. Crossing over to Tamil Nadu, the streets refused to clear up, ensuring that the 100 kph journey took more than three hours. And yes, we were bang in the middle of Bolero territory this time. No wonder then that the Bolero is the largest selling SUV in the country – it is reliable, affordable and capable, three virtues you need to rule the vast country that lies between the metros of India. The customary photo shoot at the Cape done with, we headed back to the TVS Mahindra dealership at Thiruvananthapuram, where a team of employees led by Suresh Nair was patiently waiting for our arrival. Thank you guys for the flowers and smiles. So ended an epic drive that crossed six states and roughly 2,000-odd km. We were getting a bit attached to the cars by then (the Xylo was referred to as X-Girl and the Bolero was affectionately called Hola by the Challengers).   A sumptuous feast, this time with my sweet in-laws in charge of the affairs, followed. And then we went to bed knowing that we didn’t have to drive another 600 km the next day. It was Kartik, the youngest member of the crew, who summed it up – can’t we drive one of those cars back? Road trips, I tell you, they can be infectious.

The accident rate is high (second only to Himachal Pradesh, I hear), but what is saving more lives is the sheer number of new vehicles that have reduced average speeds by a great margin. So there we were, the Challengers, stress building up as we were sitting at 40 kph and being issued death warrants through air-horns by almost everyone else on the road. Honestly, I would have saved 30-odd riders by braking on time during the course of the day and there were a minimum of three ‘situations’ where I thought I had crossed the point of no return. God’s Own Hell? Well, that was what it was.