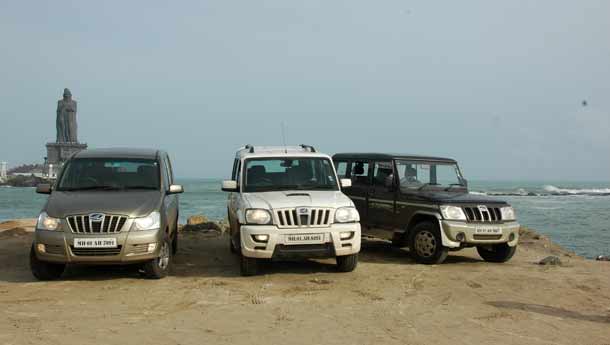 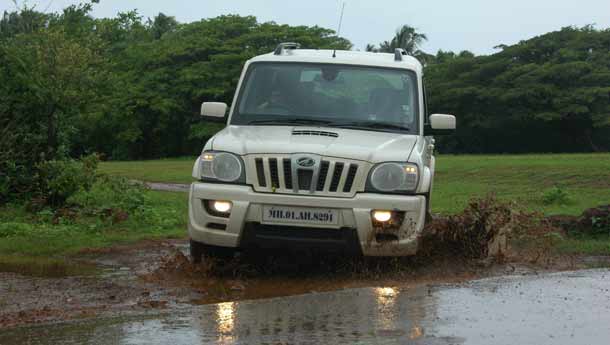 Whoever coined the phrase ‘achingly beautiful’ might have come up with that while saying goodbye to a monsoon-drenched Goa.

You see another face of this extremely lovely part of India – the non-touristy, private and intimate face – when God pours copious amounts of water all over this state.

The quaint Portuguese-influenced Goan architecture stands out in vivid detail, there is a lush carpet of green wherever your jaded eyes see, the shiny, soaked tarmac contrasts with the green scenery, bright green ferns and moss cover up entire walls, the sea breeze packs a wallop and the water at the gorgeous beaches roars with a potent rage. It was heartbreaking to leave such an incredibly beautiful place and that too, to go back to a city coming apart at the seams; back to traffic jams, displaced paver blocks, potholes and stress. It was even worse watching my friends wave goodbye to me from the Xylo, Scorpio and Bolero as they proceeded on the next leg of the Mahindra Monsoon Challenge.

I had to come back to Mumbai after the first leg – the Mumbai-Goa stretch –because a mind-numbing bunch of life’s essentials awaited to be completed,While Bijoy, Kartik, Joshua, Aman and Siddharth would go on to complete the drive, going all the way to the southern tip of the mainland – Kanyakumari. Well, something’s better than nothing, I guess, having got the chance to be there for at least one-third of the big drive.

When we got out of Mumbai, we took the easy way out. The curvaceous NH17 that connects Mumbai and Goa hugs the western coast of India, and it’s directly in the path of the south-west monsoon that hits Kerala and moves upwards towards Maharashtra. But the route we took to Goa was through the NH4: Panvel-Pune-Satara-Kolhapur, then a brief stretch of Karnataka and back to Maharashtra through the Amboli ghat, and then Sawantwadi and Goa. Progress is quicker on this highway as it is well-paved and well-maintained too. But that does not mean it doesn’t rain over here! Getting behind the wheel of the Bolero after a really long time, it took me some time to get used to its ergonomics, steering and powertrain. But by the time we reached the Expressway, I was comfortably settled in and felt I understood the UV better. Since the time the Bolero was introduced, Mahindra has given it a raft of improvements and it’s a better machine now. The never-say-die 2523cc diesel with a common-rail direct injection system develops 72.5 bhp and 15.5 kgm of torque. It may not seem like much, but throughout the drive, I never felt it lacked anything.

Okay, it may run out of steam beyond 120 kph, but cruising at 100 kph comes naturally to the Bolero and when you need to overtake, there’s always adequate torque to get you through. And more often than not, when you are in fourth, you don’t really have to shift. What else do you need? Well, some more space for rear passengers would be welcome and a rear windscreen wiper too, as the rear windscreen gets mucked up pretty quickly. My partner in the Bolero was Aman, who with her non-stop tales of Chandigarh, kept me away from my music on the stereo... just joking, the drive was long enough to keep listening to the same tracks over and over again. Even Aman’s tracks! Towns kept passing by rapidly as the highway wound down some spectacular landscapes. As we have learnt at school, the word monsoon is derived from the Arabic word mausim (curious why a quintessential Indian weather phenomenon gets Arabic roots; must have been dozing as usual when they were teaching this at school). Watching the incredible shades of green out of the Bolero’s window, I am not surprised monsoon simply means season; unlike summer or winter, the rain is a life-giver. It’s THE season, the other two are mere climatic conditions. After lunch at Satara, I decided to take a break and catch up on sleep. And I knew exactly where to get that – in the rear seat of the Xylo.   With Kartik behind the wheel and Joshua fiddling with his iPod and the Xylo’s stereo, I nodded off in seconds, having been sleep deprived and tired over the past two days. Two hours passed by and I didn’t know it, as the Xylo made smooth and steady progress across the countryside. When we passed through the Maharashtra-Karnataka border, I was awake and was amazed to see the concrete section of the highway. It was really world-class. Soon we would come back into Maharashtra again and the Amboli ghats would begin. I shifted to the Bolero with Bijoy at the wheel. Bitching, joking, gossiping mixed with classic pop and disco hits from my CD... it was wonderful to just to talk anything but work.

The rain was now coming in sheets and the Bolero’s wipers were completely outclassed by the forces of nature. Visibility was down to a few feet as we began climbing up the Amboli ghat. It was time for a tea break, and we could barely see ourselves as we stood in the little shack, drinking in the warmth of the tea. It was time to move anyway as Goa beckoned. And an extremely narrow and twisty mountain road with zero visibility, heavy fog and a wall-to-wall carpet of water was not going to come in the way! To lead the way, the Scorpio was the best bet. I strapped myself in, put on the fog lamps, front and rear wipers and the hazards and the journey restarted. Goa or bust! Progress was slow, but thankfully traffic was light as we steadily and surely made our way down. Sitting in the Scorpio, again after what seems to be a long time, it was nice to rediscover it. Especially under such tricky conditions when you want your car to obey you and protect you. The new engine in the Scorpio is terrific. I am sure Mahindra can extract more than the 120 bhp it offers, but you don’t really want more. The almost 30 kgm of torque makes it feel like an automatic car, but I was controlling speeds on those treacherous stretches, sticking to 2nd and 3rd. And I didn’t even put on the music, concentrating on navigating our way through the mountains and chatting with Siddharth while munching on the snacks he got from home. The only noise in the car was a faint snarl from the engine and of course, the crunch-crunch of our teeth as we made way through one food packet after the other.

We were down safe, Sawantwadi passed by and the Goan border revealed itself at exactly 9 pm. It was all magical from here onwards. The road was well-maintained, smooth and well-marked... and it was twisty and beautiful. Windows down, I took in lungfuls of Goan air. The air felt different – it was liberating, refreshing, exhilarating. Soon we were at a hotel room in North Goa and celebrating the end of our first leg. The next day, the only day in fact, was reserved for R&R; well, we were in Goa, weren’t we? Though reportedly time passes slowly in Goa, I am sad to report that it does in fact pass. The next 24 hours eventually became part of my memory as the next morning I waved the gang and Goa goodbye. See you soon and drive safe.