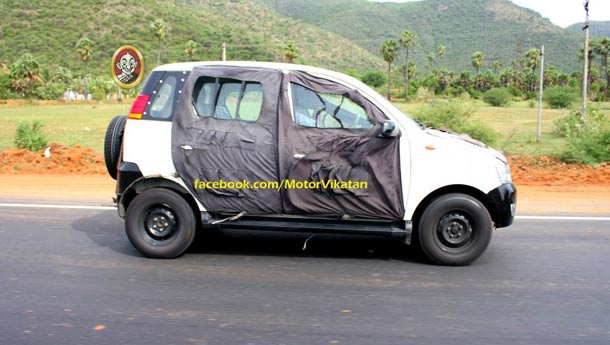 According to reports and a leaked internal document, Mahindra's new baby Xylo is gunning for glory with not one, but two turbochargers under the hood. The 1.5-litre, three-cylinder diesel engine will become the smallest twin-turbo diesel in the country and also the cheapest on a car.

This new engine boasts of an all-aluminium construction, is BS V ready and according to some, can also be made BS-VI compliant with a few tweaks. The engine uses a double-overhead camshaft setup with a Bosch-developed common-rail that is built to a cost. The twin-turbocharger setup is new to Mahindra and is expected to come on the XUV5oo as well. What isn't known if this is indeed two turbochargers or a single twin-scroll turbo because Mahindra is known to have done a considerable amount of R&D on a twin-scroll unit.

What's impressive is that the engine weighs just 185 kg, some 65 kg less than the mDiCRDe block that powers the Xylo D2. The power ratings are quite good - 100 bhp@3750 rpm and nearly 24.3 kgm of peak torque from 1600 rpm to 2800 rpm. Mated to a five-speed manual, it makes it more powerful than some of its competition, including the 85 bhp version of the 1461cc powered Renault Duster and the Premier Rio Multijet that produces 72 bhp. The motor itself is slightly more squarer than the 2.5 mDiCRDe and on paper it seems quite torquey, given the 2.5 produces just 22.2 kgm. How Mahindra have improved NVH is not known considering it's a three-cylinder motor.

The mini-Xylo itself will be a 5+2 seater, the last row facing side-facing, folding seats, something we reported as far back as 2011. Expected to feature most of the kit found on the regular Xylo, the mini-Xylo will start under Rs 5 lakh, with the top-end Xylo expected to slip under Rs 6 lakh. The unique positioning of a part MPV, part SUV and part hatch for the sub 4-metre mini Xylo should help Mahindra cement its position even further as India's largest seller of utility vehicles. The launch is expected by late-September/early-October to cash in on the festive season. A 1.2-litre, three-cylinder petrol motor for the mini-Xylo is rumoured to be under development, but little is known about it so far.