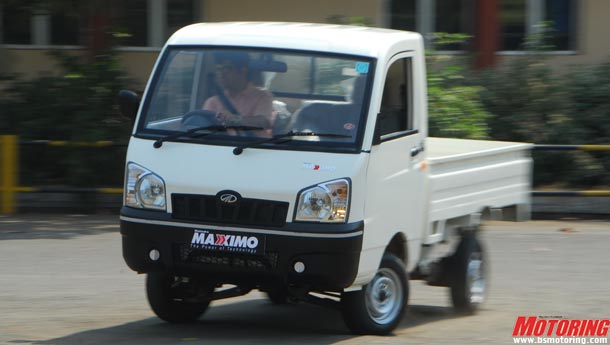 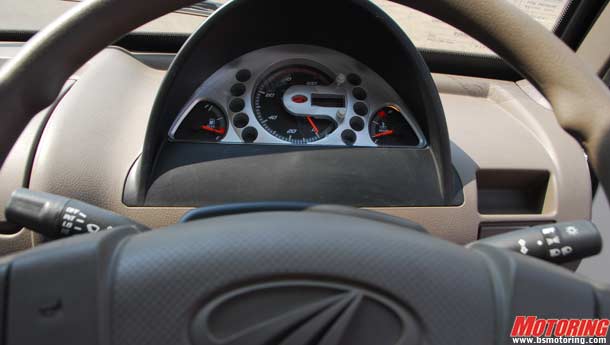 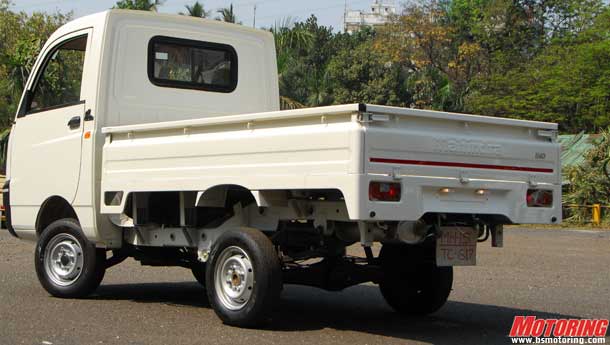 Pickups are a strange set of vehicles. Drive them unladen and they tend to float around and generally behave in a rather strange manner. Load them up and they stay more settled but the steering soon starts to feel a tad slow and it has the dynamics of a cow on roller skates. So when Mahindra called us to try out their new Maxximo sub one-tonner at their plant at Kandivli in Mumbai, I was immediately deputed for the job. Now I didn't know what to expect, but having got a general feel of the vehicle back the Auto Expo, it did raise some expectations, albeit realistically.

Then to add a layer of peanut butter to the scrumptious piece of bread, they threw in a Tata Ace for comparison. Now the Tata Ace is something of a Rambo in the under one-tonne space, decimating its three-wheeled competition into pulp and creating an all-new segment in the process. And since I like my Rambos, I couldn't help but rub my hands in glee at the new proposition.   So, befittingly I got in to the Ace first. Now the Ace is quite car-like in some ways. From the seating position to the controls to the dashboard layout. On the move it does what most commercial vehicles do with the first two gears which are literally crawler gears and a whole creamy layer of torque rushing in at speeds of over 25 kph in third and fourth. It's nimble, the gears slot very well and the Ace generally feels decently screwed together. As a pioneer of sorts, the Ace is quite a tough engineering act to follow. So have Mahindra, who launched their answer nearly five years later, finally cracked it?

To find out, I traded places with Aneesh who had been having a ball of a time in the Maxximo on the test track. At first glance, the Maxximo comes across as being slightly larger than the Ace and it actually is. According to product literature, the Maxximo boasts of a 2.4 cubic metre cabin that is slightly larger than the Ace but impressively even has an 860 kg payload against the Ace's 740 kg. Get behind the wheel and the additional cabin space becomes evident. There is more shoulder, head and leg room and the lack of a hump in the centre means you can actually use the driver and passenger seats as a lie-flat bed. Nice!

The 'bigger is better' game also pans out under the hood, er seats. Mahindra have put in a larger 1.1-litre two-cylinder common rail diesel engine to power the Maxximo, unlike the current Tata Ace's 700cc indirect injection oil burner. Churning out a max power of 25 bhp and 5.5 kgm of twist, it also is some nine bhp and 1.8 kgm up on the Ace. To add to the mini Tata's woes, the Mahindra engine also boasts of dual overhead camshafts and four-valves per cylinder. So on paper, the Maxximo sounds like the new Rambo. But is it really?   So I went back to the test track with the Maxximo where just minutes ago Aneesh was pretending to go sideways in it. Now the test track itself is nothing more than a slightly wider jogging track around a garden, but hey with space being such a crunch in Mumbai even this is an achievement. But that didn't stop it from going up to 40 kph on some parts of the track. The Maxximo feels a tad larger on the move, but is just as nimble as the Ace. The gears on our test truck didn't feel as slick, but get into the mid-range and the torque feels meatier and comes in with a steady rush. It also tends to move quicker off the blocks and its brakes have decent modulation and feel with no tendency to go wayward under hard braking. The engine as a whole feels pretty refined and I don't doubt it'd be efficient for its end users and that's what they mostly care about.

They might also care about the fact that the instrument console is nicely laid out and that they have a 12V socket to charge their mobile phones. But they will certainly like the fact that at Rs 2.79 lakh, ex-showroom Navi Mumbai, it costs just as much as the Ace - an absolute value proposition. I don't doubt that Tata Motors will have a response to it, and that the Indian terra firma will soon be buzzing with even more two-cylinder wonders. Despite its fallacies, it looks like little pickups are now becoming the new cool.