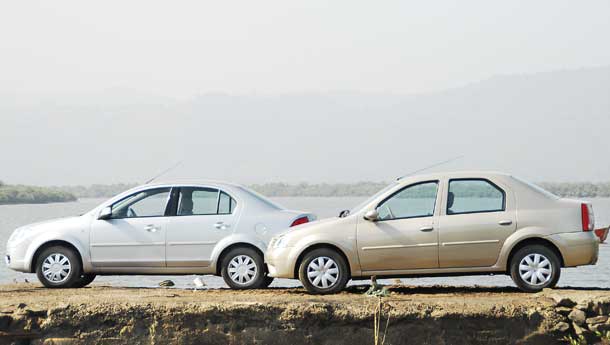 Vitthal the fisher boy seemed terribly confused. ‘What the heck are these city slickers doing, mucking about in the dirt with their shiny cars?’ He didn’t actually say that, of course (he just looked at us and scratched his head), but I could see that words to that effect were floating around in his young brain. Nevertheless, I had more to think about than the puzzlement of the proletariat. For one thing, the dry stream bed in which I had elected to stand and shoot the competitors in this story wasn’t actually dry – the caked mud was still wet and squelching around in my (Bangkok-fake) driving shoes wasn’t especially amusing. Secondly, Joshua and Shumi had found a couple of oars on the little jetty where we had parked the cars and were soon engaged in a duel of sorts, bang in the middle of my frame. ‘Oi, stop larking about and let me shoot, will you?’ I yelled. They quit it and settled down in front of the cars, legs dangling in a suitably carefree manner over the jetty. It made a nice frame, so I kept them in it.

Looking through the lens, one thing was clear to me – although the Logan was no Quasimodo, the Fiesta was clearly the one with the winner’s sash around its shoulder. It was typically European in appearance – solid, purposeful, understated and with a fair amount of elegance. On its own, it wouldn’t win any design awards, but in present company it certainly took the honours. The swept back headlamps looked the business, and the overall effect was one of cohesiveness. The Logan, on the other hand, looked a generation down from the Fiesta, even though the Indian version has been given a new ‘Renault’ nose and grille (the European version is Dacia badged and is a bit… well, dowdy). This is not to say that it’s a bad looking car. It seems designed for a purpose, which it achieves well. Virtually all the body panels are flat and almost every line on the car is straight. This is, of course, a way of ensuring ease of production and repair, and is a part of the bigger plan of making a cost-effective car. Still, it’s difficult to banish the word ‘box’ from your noggin when you first take a look at the Logan. No matter which school of design you subscribe to, there’s no getting away from it – it’s a rather tall box, with a couple of design elements like a kinked C-pillar and creases down the bonnet and on the boot. Looked at from the rear, the Logan looks a bit butt-in-the-air, and the single reversing lamp points to more cost-cutting, but there’s no doubt that you’re getting quite a lot of metal for your money. At the end of it, there’s nothing wrong with a car that treads the middle path, is there? Just don’t expect too many second looks when you’re out on the road, that’s all. Round 1? The Fiesta.

For the record, we were out on the road because we felt that a proper drive was long overdue. You know, the sort of situation where we get hold of a couple of cars, decide to drive to the seaside in Kashid and put it down to ‘a day’s work’ – that’s what I’m talking about. An early start meant we were on the picturesque NH17 by 6.30 am, the prospect of greasy fries and milkshakes at the McDonalds next to the Mumbai-Pune Expressway spurring us forward. Between bites and gulps, I gathered that Joshua, who had been driving the Fiesta, was rather pleased with it. ‘It’s got lots of low-end grunt, so acceleration is very good for a diesel car. It’s fun to drive as well, and the ride quality’s great. Hey, Shumi! That’s my Coke you’re drinking!’
Shumi: ‘Oh, sorry’. (Picks up Joshua’s Coke and sips from it again)
Joshua: ‘I said that’s… never mind.’
Shumi: ‘What?’

Leaving the two to their amusements, I deliberated over the Logan that had been in my hands thus far. To be honest, I had gotten into it with my judgement slightly coloured by the time I had spent in another diesel Logan with Bijoy during its launch. On that occasion, driving the car back to Mumbai from Nashik, we had been disconcerted by the fact that it didn’t want to go anywhere unless really flogged. Even allowing for its brand-newness, this was a bit of a downer. I had hoped that this was an issue with that particular car and, in the end, I was right. Although you’re not likely to shred any tarmac with it, the 1461cc engine with a second-gen common rail  is an honest, robust unit, putting out 65 bhp@4000 rpm and a very healthy 16.3 kgm@2000 rpm. It’s slightly clattery at idle, but not annoyingly so, and once past 2000 rpm it hitches up its skirts and pulls admirably. There’s good mid-range performance available and overtaking isn’t a cause of concern, as it can be with lesser diesels. You’ll see 60 kph in 6.5 seconds and a 100 klicks in about 18, but the nice thing is that the Logan feels faster. A paragon of refinement it is not, but this is an extremely capable, likeable powerplant that should please most owners. The gearbox brings up the rear admirably, with a precise and light action, and the gearing is spot on too – whether you’re on a highway run or dawdling along in the city, driveability is extremely good.

The thing is, the Fiesta is better. Its 1399cc, 68 bhp, 16 kgm lump is all that the Logan is and just that bit more. It’s much more refined, offers better acceleration and lends the Fiesta an involving nature that's not quite there in the Logan. Its gearbox has a heavier shift action, which can be an irritant in traffic, but if you love driving, the Fiesta's your car. Round 2? The Fiesta, but not before its taken a few punches.

'Let me have a go in the Fiesta, will you?' We were nearing Alibagh, where there's a nice little ghat section, and I felt a few apexes coming on. If there's one thing that Ford knows how to do, it's to build chasses, so I reckoned the Fiesta would be worth a few laughs. Inside, one thing was clear – it had the Logan's number as far as the interior went. There's an abundance of plastic in both cars, but the Fiesta is classier, more tasteful, better laid out and gives off the feeling of higher quality materials. Its dials are a bit down market compared to the Logan's cleaner, fresher units, though. Cost cutting has worked to the Logan's detriment – there are no inner door handles and no boot release (now that's really annoying). Ergonomically, it's all over the place; the air-con dials are obstructed by the gear lever (and they turn in the opposite direction from what one is used to), the front power window switches are low down on the centre console (the rear ones lie at the rear passenger's feet) and almost everything (hood release and column stalks, for example) is still set for left hand drive. These are not things that you can't get used to, but the point is that you shouldn't have to get used to a car – it should feel as right as possible from the word go. Thus, the bell at the end of round 3 sees the Logan reeling from a blow to the jaw.

Round 4, however, is where it starts to get really interesting. You see, although the Fiesta's been landing a few on the Logan all this while, when it comes to comfort and space, the Renault unleashes a shattering uppercut. This is by far the roomiest car in its class, and three people can be accommodated in the rear seat without fear of unintentional intimacy. There's plenty of headroom and legroom and the seats offer enough comfort to not have to fidget around every few kilometers. The ride quality it offers is similarly peerless – the Fiesta just can't match the way the Logan casually dismisses potholes, rumble strips, speed breakers and other such obstacles. You can almost hear it say 'Next!' after each such occurrence. In a straight line as well as around corners, the Logan is perfectly poised and very stable, with little body roll. There isn't as much feel in its steering as in the Fiesta's, nor is it as willing to change direction, but that's quite all right since 90 per cent of its owners aren't going to go apex hunting on the weekends. The Logan brakes adequately, but is outperformed in this respect by the Fiesta, which is much sharper.

By the time we got to Kashid and settled down near the beach in some hammocks, I had realised that what had seemed like a walkover for the Fiesta was anything but. There's no doubt that as a car it's better built,  more fun to drive, marginally more fuel efficient and better looking than the Logan. Purely in terms of a shootout,  it wins. But, and this is a very big but, is it better by a lakh of rupees? The answer is no. The Logan, for all its quirks, offers virtually everything the Fiesta does (except ABS, which is unfortunate – it's a life saver in Indian road conditions) and is a more comfortable vehicle to be in. Unless you're snooty about brands or crave refinement over everything else, there really is no overwhelming reason to pick the Fiesta over the Logan, which is quite possibly the most sensible and practical mid-size sedan in the country. If I were a suit at Ford, I'd be thinking seriously about pricing...