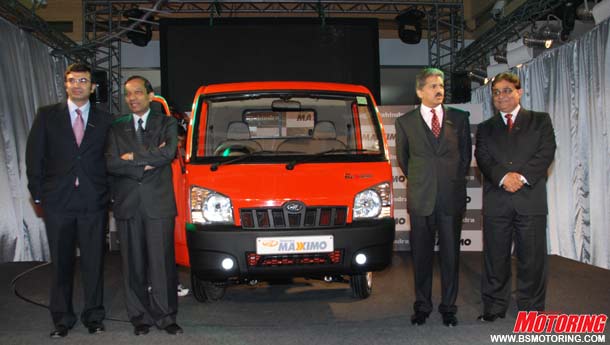 Mahindra & Mahindra has launched their Tata Ace rival - the Maxximo. The Maxximo is priced at Rs 2.79 lakh, ex-dealer, New Bombay, which is exactly the price of the Tata Ace.

The Maxximo comes powered by a 2 cylinder CRDE engine that has four valves per cylinder with DOHC (Double Over Head Crankshaft). The engine puts out power of 25 bhp, and makes 5.3 kgm of torque. M&M claims the Maxximo will be able to be as fuel efficient as 20 kpl, which they claim is two or three kpl more efficient than rival Tata Ace.

The Maxximo has a loading capacity of 850 kg, for its 35 square foot loading area. The vehicle comes with a two-tone dash, car-like instrument cluster, car-like cable operated gearshift and headrest for both driver and co-driver. The cabin also features lie-across seats and comes equipped with mobile charging points. The cabin measures, 2.4 cubic metres.

In terms of safety, the body is reinforced with steel, and the crash structure meets N1 norms, and AIS0129 safety norms as well, a first in its segment.

M&M claim best in class gradability, which means the Maxximo ought to be able to out-climb its rivals. The company also claims that operating costs for the Maxximo will be 25 % lower than that of the Tata Ace, with up to Rs 3,500 being saved by the operator.

The company is offering zero expenses, or free maintenance, for the first year or 40,000 km, whichever comes first. This is applicable only perishables like engine oil and the like, and not to tyres.

The Maxximo will be sold through 191 dealers and 600-plus outlets. Phase 1, includes its launch in the North, West, Bihar and Jharkhand. In Phase 2, it will be launched in the rest of the country - sometime in March 2010.

The Maxximo is being built in the Mahindra plant at Chakan. The factory has a capacity of 3,000 units per month till April, but to manufacture more than that, the company will have to make a further investment. As of now M&M has invested Rs 375 crore in the project.

Electric and CNG options, displayed at the 2010 Auto Expo, will make their way to showrooms by October-November 2010.

M&M currently has no plans of exporting the Maxximo, but might do so in the future.