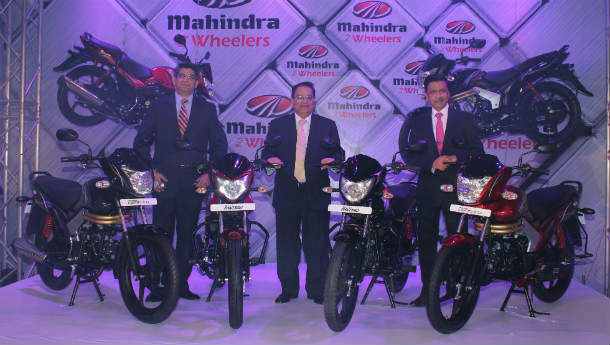 Mahindra 2 Wheelers, the two wheeler making company of the Mumbai-based Mahindra Group, kicked off the new year with a re-entry into the motorcycle segment with the unveiling of two indigenously developed bikes.

Powered by a 110cc engine, Mahindra 2 Wheelers showcased the all-new Centuro and Pantero commuter bikes which are designed to compete with market leader Hero Splendor and other bikes in the segment like Honda Dream Yuga and Bajaj Discover. The company has strapped the Centuro with features not seen before on any Indian motorcycle.

Mahindra 2 Wheelers, which was formed after the take over of assets of now defunct Pune-based company Kinetic Motors in 2008-09, had been struggling to get a foothold in the two-wheeler space dominated by Hero MotoCorp, Honda and Bajaj Auto.

It was forced to withdraw the Stallio, its first motorcycle launched in 2010, from the market following weak consumer demand and teething technical problems. With the launch of the new motorcycles Mahindra hopes to start afresh in this segment which is presently facing demand uncertainty.

Anoop Mathur, President - Two Wheeler Sector, Mahindra & Mahindra said, "We have invested a total of Rs 100 crore in our research and development facility where we have 200 engineers working on various project. The two products will hit the market shortly".

The Pantero, in fact, is a revamped version of the Stallio, which was earlier supposed to be launched in December 2011. However, the company decided to hold its launch and diverted its focus to scooters as it now has five products in this category. The Pantero will now be commercially launched in two weeks.

To attract customers M&M is offering a feature-packed bike Centuro with technology seen only on car or SUVs till now. The bike comes with anti theft central locking system and an engine immobiliser. The key is a remote 128 bit encrypted flip key similar to the one seen on a Skoda or a Honda car.

The Centuro has 'Find Me Lamps' that helps locate the vehicle in crowded and dimly lit parking lots. Its 'Guide Lamps' stay illuminated after the ignition is switched off and the key removed. It also sports an fully-lit digital dashboard with an in-built, 'Service Due Indicator' and 'Distance- to-Empty Fuel' calculator among other features.

M&M aims to launch the Centuro next month, however pricing of the two bikes will be disclosed at the time of commercial launch, said company executives. The two launches will be followed by the launch of the 300cc performance bike Mojo in March and two new scooters next financial year.

One of the two new scooters will be powered by hybrid technology - a first in the industry if the company beats Hero MotoCorp and TVS Motors to the race as both the companies are also independently developing hybrid scooters.

All the M&M two wheelers will be produced at its plant in Pithampur, Madhya Pradesh which has a capacity to produce 1 million units per annum.