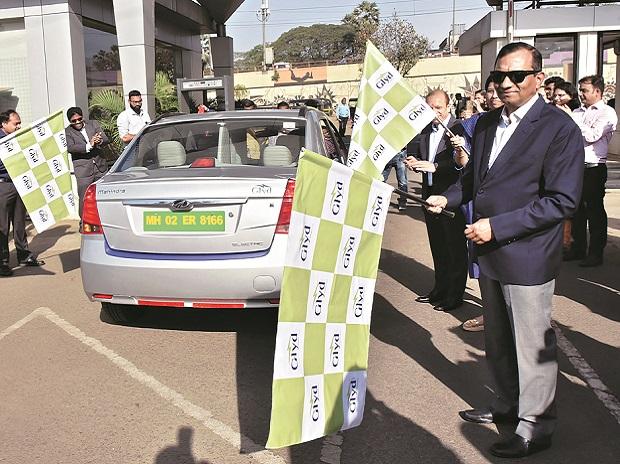 Pawan Goenka, MD, M&M, at the launch of Glyd in Mumbai on Monday | Photo: Mahindra & Mahindra

Mahindra & Mahindra, the tractor-to-technology conglomerate, launched an e-mobility service called Glyd on Monday, for its range of electric vehicles (EVs). The move, it said, was in line with a larger aim of popularising e-vehicles and to participate in the fast-expanding shared mobility market, where Uber and Ola have a head-start. “To not participate in shared mobility and watch it from the sidelines will be suicidal,” said Pawan Goenka, managing director at M&M.

The group always believed in the future of EVs, he said. These would be a lot more viable in the fleet and shared mobility segments; Glyd was a step in that direction, he added. To begin, the premium tech-based e-mobility service will be available only in Mumbai, on select routes. The plan has a pan-Indian presence in all key cities over the next 12 months.


Targeted at office-going executives, it offers web-conferencing, curated entertainment and music content from selective partners. And, claims pioneering features such as a privacy screen, air purifier and strain-free lighting. The vehicles will come with features such as bolstered seats, a wrap-around headrest and custom-designed armrests, Mahindra said.


Commuters can hail Glyd services at prominent office hubs in Mumbai. The service will be 5-10 per cent costlier as compared to Uber or Ola. On Monday, the company flagged off 10 e-Veritos for the service at the Bandra-Kurla Complex.


Glyd has tied up with Vodafone-Idea, Cisco Systems and other service and content providers to launch the service in Mumbai.


Depending on type of office and nature of business, the demand for cabs would vary, said Goenka. In BKC, for instance, the demand could be 1,000 rides a day; Lower Parel could have far more.


“We need to identify new user cases for e-mobility and then allow it to scale up,” said a Mahindra official, declining to be identified. “Our services will be premium. There is a difference between you checking into a five-star hotel versus a budget hotel — even as the room size is the same, the experience is different. Mahindra is looking at offering a differentiated experience.”


Depending on the response, the application will be used for various e-vehicles Mahindra has and will have in the future, he added.


According to Mahindra, it also plans multiple e-mobility solutions, across cities. In an earlier interaction, Goenka had said there was a lot of interest from many state governments, some having approached the company for e-mobility and setting up last-mile connectivity. He'd said Mahindra was “in serious discussion” to create a fleet of its EVs in three or four cities.


The central government has said it wants at least 30 per cent of new automobiles on Indian roads to be electric-powered by 2030, as part of a National Electric Mobility Mission Plan.