Mahindra follows Tesla route, to use data to win market 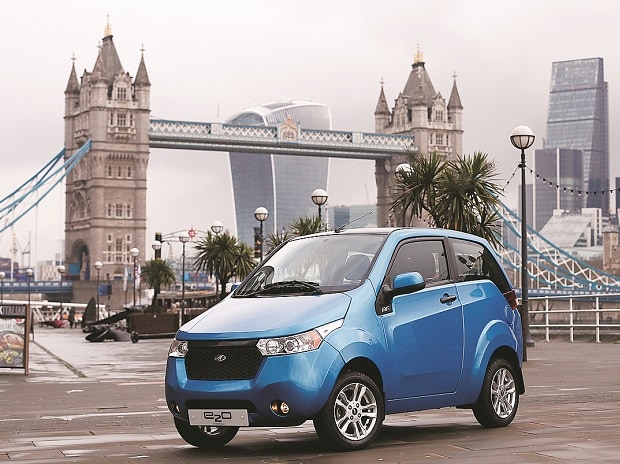 A Mahindra e2o electric car is seen during its launch in London on April 15, 2016. Photo: Reuters

Mahindra Electric, India’s only electric car maker, is following in the footsteps of global firms such as Alphabet’s Waymo and Tesla to build a repository of data it will use to gain a competitive edge over rivals.

While Mahindra is the only player in the market so far, the country’s move to incentivise and promote electric vehicle (EV) adoption over the next decade is expected to attract global auto firms to make and sell zero-emission vehicles here.


Mahindra says unlike in the traditional car market, where money power and platforms can help gain market share, players in the EV industry will need to prove themselves. Similar to autonomous vehicles, the data collected on roads in real world driving conditions will help fine-tune and build better electric cars.


“Today we know which car is going where and how many kilometres it is travelling. Everything can be monitored,” says Mahesh Babu, chief executive officer at Mahindra Electric. “We are working on getting to the next level of telematics. When I talk about plans, I don’t just mean making better drivetrains and batteries, but even the tele connectivity and analytics that we are doing.”


Mahindra gathers the data, and Bengaluru-based Lithium, which operates a fleet of e2o electric cars, has used them to break even in a short span of time. In turn the cars that Lithium operates have clocked a few million kilometres, which helps Mahindra learn more from the data it gathers.


The recent data released by the State of California Department of Motor Vehicles showed that Waymo had logged 30 times the number of miles in its autonomous car tests more than all of its competitors combined. It also found that the company’s self-driving system was most accurate, with human intervention requiring just 0.2 times per thousand miles.


Waymo’s closest competitor was BMW, whose accuracy system is 1.6 times per thousand miles, which is one-eighth the accuracy of Waymo. Similar to Alphabet’s project, which will bring in the dollars only in the next five years to a decade, Mahindra Electric is making significant investments in getting more cars on India’s roads despite the current return on investment being negligible.


After little success in selling cars directly to consumers, Mahindra Electric has set its sights on the fleet operator market, partnering firms such as Bengaluru-based Lithium to use its e2o electric hatchback. Lithium alone has a few million kilometres of driving data, helping Mahindra understand driving, charging, and other patterns. Unlike Tesla, which has a model of selling expensive electric cars to high rollers, which in turn pays for the development of lower-cost variants, Mahindra says it will innovate on mobility solutions and not necessarily individual ownership. With car ownership in India still in low single-digits, the company is essentially geared up for India to skip the car ownership revolution.


“We will work on only future technologies and future mobility solutions. We have no intention to change the existing model (car ownership) to electric. It will not work. We will look at how mobility is changing, which is why you see us making deals such as the one with Ola,” adds Babu.


As part of this, Mahindra has partnered with India’s largest taxi aggregator, Ola, to run a pilot with electric cars in Nagpur. If successful, the company says the model can be replicated in the country, but the focus for now is to collect data and analyse them to understand what the requirements for having electric cabs might be.


“Driving conditions in India are very different from global driving conditions, so you get information that is India-specific,” says Chetan Maini, vice-chairman at Sun Mobility and founder of Reva, which he sold to Mahindra.


“Today having data in any field is very important. It is even more important if that field is more fragmented and electric vehicles fall in that category. There’s an opportunity for using that data to probably get a headstart over others that don’t have them,” he adds.


Batteries and the electric drivetrains are becoming commodities, and manufacturers are increasingly turning to the software to differentiate themselves from rivals. Silicon Valley-based Tesla even charges customers an extra $8,500 to unlock the full potential of the 75-kilowatt hour battery pack, which is already installed in its S60 sedan.


Tesla is renowned for rolling out over-the-air updates to improve the performance of its vehicles, similar to how makers of smartphones roll out updates with the latest software for devices.


Maini, however, points out that the data collected need to be the right type of data and need to be analysed to derive insights. “Just having data doesn’t mean anything unless you know how to use them.”


The government has set a goal of shifting to electric mobility by 2030. Babu estimates that India could have 100,000 electric vehicles in the next three years. The company’s intention is to clearly be the leader in the space with a target of selling 100,000 products in five years and has several new products — not necessarily cars — in the pipeline.


“The change I’m seeing now is that the regulators have also started pushing very hard. There are two stakeholders in the market, apart from the manufacturer — the government and the consumer. If there’s a push from one of them, the chances of that sector picking up are very high,” said Abdul Majeed, Partner at PriceWaterhouse.


While Mahindra might have the first-mover advantage, the company needs to continue innovating to bridge the gap between gasoline-powered cars and electric ones, he says. “While people do certainly understand the environmental impact of driving a regular car, they do not want to compromise on what it offers them,” he adds.


Grand plans
Mahindra has partnered India’s largest taxi aggregator, Ola, to run a pilot with electric cars in Nagpur
If successful, the model can be replicated in the country
The focus for now is to collect and analyse data to understand what the requirements for having electric cabs might be
The company's target is to sell 100,000 products in five years
After little success in selling cars directly to consumers, the firm has partnered with Bengaluru-based Lithium
Lithium alone has a few mn kms of driving data, helping Mahindra understand driving, charging, and other patterns


Global scenario
Alphabet’s Waymo had logged 30 times the number of miles in its autonomous car tests more than all of its competitors combined
A recent report said, Waymo’s self-driving system was most accurate, with human intervention requiring just 0.2 times per thousand miles
The closest competitor BMW’s accuracy was 1.6 times per thousand miles, which is one-eighth the accuracy of Waymo
Tesla has a model of selling expensive electric cars to high rollers, which in turn pays for the development of lower cost variants
Tesla is renowned for rolling out over-the-air updates to improve the performance of its vehicles