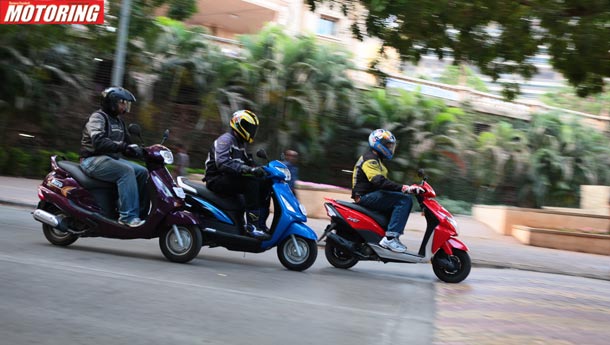 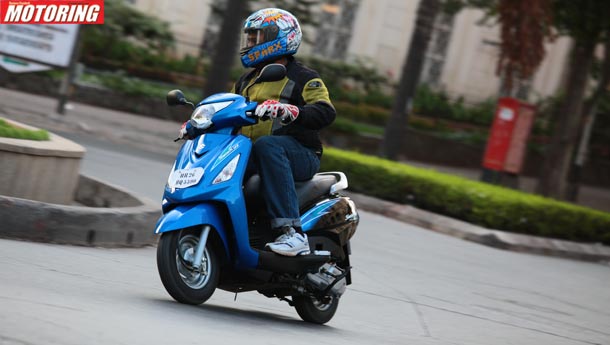 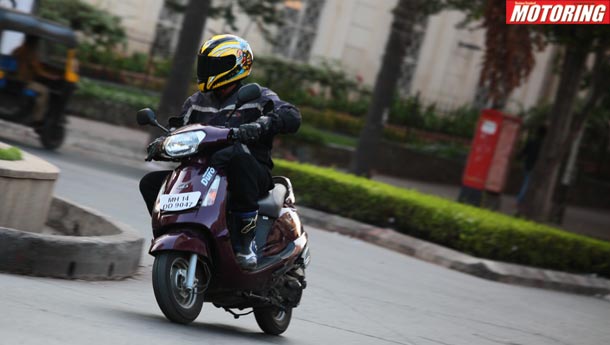 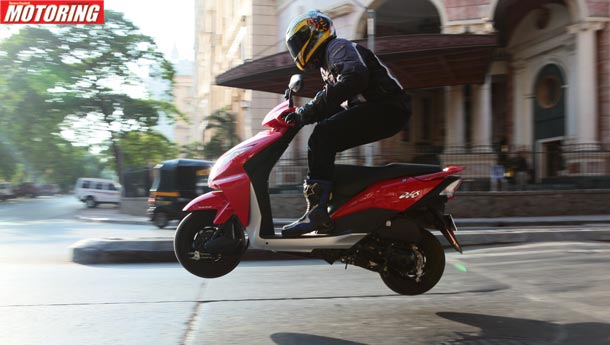 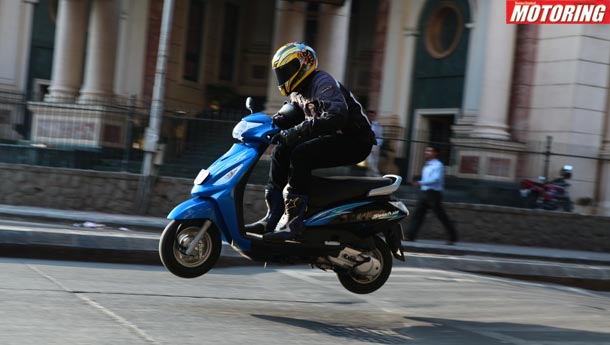 No monkey business here – this is an all-serious shoot-out. Taking into consideration the requirements of our four prospective scooter buyers, we’re going to evaluate these machines on the counts of coolness, efficiency, handling and ride quality, performance and, er, a surprise element that is, I assure you, of much relevance to this test. Here we go...

A ROUND OF INTRODUCTION, PLEASE?

To the extreme left is the Honda Dio – the newest scoot from Honda and it has a name to live up to. The now-defunct Dio was a favourite for its sporty styling and strong performance. This one looks all grown up but is it for the better? A little to the right is the Mahindra Duro 125 DZ. It’s definitely the least stylish of the lot but then it was never aiming to be a hot-shot cover girl anyway. To the absolute left is the Suzuki Swish. It’s a younger iteration of the rather likeable Access 125 and we were quite impressed with it when we reviewed it in the May 2012 issue of BSM. Does it hold much water when pitted against the rest of the competition, though? Let’s answer all of these questions.

The Duro. Okay, kidding. This bit of the story could be written even before we saw the vehicles (it actually was... – Srini) in the flesh, let alone ride them. Let’s start with the least coolest – the Duro. It won’t make you look good in college, and calling it stylish is like telling your friends you’ll turn up at the coffee shop in a Lamborghini and turning up, instead, in a tractor. When Kinetic first launched the original number, the Nova, it looked different but not radical. The bulbous LED tail-lamp was a striking feature and you know an automobile is a no-good on the design front when the first thing you describe about it is the tail-lamp. Re-badged and re-stickered, the Duro looks decent but not quite dated, not just yet. It is the least attractive of the lot, and I bet you’ll agree. The prize for the best effort definitely goes to the Suzuki Swish. Suzuki has taken a scooter of a seemingly irreversible age and actually made it appealing. The Swish looks the liveliest, has an electric air about it and while it’s not the best styled, it will be a source of great design flair for the average commuter. The coolest, funkiest (not to be read as the youngest) design of them all is the Dio. It’s a stylish looker, a bit European (or is it Japanese?), and has a universal appeal to it that would make any one of our prospective buyers look good while astride it. Signs of bodywork layering look classy, and bring about an immediate association to the bigger, fully-faired motorcycles in the Honda family (a brownie point from the girl, then?). Overall, the Dio looks chunky and is well finished but it’s lost the edgy sportiness of the original number.

Scooters are not the best corner carvers and even my neighbour’s three-year old daughter will tell you that. But regardless of that unfortunate fact, handling is crucial. On the flickability front, you can’t best the Swish. It’s the liveliest handler of the three and it scores equally high on the stability front too. Leaning it over takes little effort and it’s absolutely poised through corners and takes minor mid-corner corrections without much fuss. I like the ergonomics of the Swish – neither too sit-up-and-beg nor too sporty. What I also like about the Swish is the space on offer. The seat is the firmest of the three and will keep tail-bone fatigue away for the longest time compared to the other two. If you’ve ridden the original Dio, you would recall its near-motorcycle riding stance. This one is entirely unlike it. A good thing if you look at it as a scooter, but it’s clearly lost the ‘motoscooter’ tag in its new iteration. The seat is wide and soft-ish, and is the comfiest if you’re not looking at riding longer than an hour, after which I suspect your tail-bone will get a bit uneasy. It is also the only one in this test with trailing-link front suspension (the other two have telescopic forks) and I’m handing out a serious negative point to Honda for sticking to such an outdated format. Overall, it’s far more stable than the original and the handling is quite good, but the new Dio is to the original what the Estilo is to the original Zen. Mature, but lacks character. An ergonomic issue is what the Duro is. The seat is candy-floss soft, the floorboard is high enough to give your feet altitude sickness and I dislike the riding position. Increased ground clearance is a good thing, but if it makes you look funny, what’s the use? Plus, the other two make you look smart and still don’t scrape speed-breakers! That said, the Duro’s ride quality is perhaps the softest of the three and you will like it if you’re not a performance enthusiast. However, its good points are marred by the dicey ergos and it comes in last, fair and square.

This bit is more tightly packed than one of ’em Burger King Triple Whoppers. The Dio is the most fuel efficient of the three. In a mixed cycle (urban and highway runs), it returned a best fuel efficiency figure of 43 kpl, which is sub-150cc motorcycle territory. The Duro came in a close second, with 41 kpl – not bad at all! The Swish comes in last at 39 kpl, a figure that seems decent when reviewed in isolation and not bad at all considering the enthusiastic nature of the motor. However, if we bring in the respective tank capacities of these scooters and calculate the range, the order is slightly rearranged. This is crucial because scooters typically have small fuel tanks (as compared to motorcycles, what else?) and frequent fuel stops are an obvious irritant. The Duro has the largest fuel tank of the trio (6.5 litres) and taking into consideration its overall fuel efficiency figure, has a range of 266 km. At 5.5 litres, the Dio has the smallest fuel tank here although its superior fuel-efficiency brings home silver, providing it with a 236 km range. Lastly, despite its 6 litre tank, the Swish comes in a very close third, with its range of 234 km. A round of applause for the three, ladies and gentlemen!

The most unstressed motor of the three scooters belongs to the Dio. However, it carries a displacement disadvantage (so that’s how it’s more fuel-efficient!) in this test and in outright acceleration, falls back to let the Swish claim top honours. The 124cc, 8.5 bhp, four-stroke in-line four (okay, kidding!), err, single-cylinder motor on the Swish is the strongest performer here. It is the quickest off the block and its energetic nature will appeal to more than just the boy racer, I’m sure. The engine is refined and feels solid and apart from quick acceleration, its overall tractability is just too good!

The Dio’s 109cc motor is unstressed, but at 7.6 bhp, is the least powerful scooter here. It isn’t very involving to ride, but is a ‘happy’ motor that you can ride all day and not tire of. Explains why the Activa (with which the Dio shares its motor) is so sought after, then. It doesn’t feel inadequate unless compared to the Swish and if not from a performance enthusiast’s point of view, is almost as good as the Swish, just different in character. Compared to the other two, the Duro’s motor feels a bit lethargic and not as solid. Its power advantage over the Dio is somehow lost in real-time riding although that may please the parents of some eager-to-go teens. You’ll like it if you’re disinterested in riding (you hear that, Mr Commuter?).

Scooters, by nature, are not as stable as motorcycles, especially so in panic situations. It’s not unusual to run into a strategically placed speed-breaker on our roads and this extreme test (Stop giggling, you in the back!) will throw light on the stability and suspension behaviour of the scooters on hand in such a situation.

Each of the scooters was yumped off the same speed-breaker at 50 kph not more or less than three times. This ensured absolute uniformity and the results were as follows: The Swish was the easiest to get airborne and was the most controllable post touchdown. It felt unruffled and in a real-life scare, you’ll certainly make it through without any drama.

The Dio was less willing than the Swish to take off and in a real-life situation, would buckle and perhaps shake you up a wee bit. On landing, it was stable although the brake lever feel, can at best be described as ‘dead'. Dislike! The Duro’s ergonomics mean it’s rather unpredictable in a situation like this and its soft suspension (...also means good ride quality on not-so-nice roads) makes it go all over the place. The bottom-line is, you’re safest on the Swish.

It’s a no-brainer that the Suzuki Swish 125 is the winner of this shoot-out, but do the four characters of this story agree? The commuter likes the Honda Dio, but the four month waiting period (in Mumbai, at the time of going to press) is asking for too much! The Duro’s economy is overshadowed by its overall dated feel and the commuter will have to stick it out for a few months more on his ageing Nova in order to save up for the Swish.

At Rs 50,118 (all prices ex-showroom, Mumbai), the Swish is expensive, but it appeals equally strongly to the commuter, the boy racer and the girl. The superbike rider never wanted a scooter for thrills, so he’s okay with the Dio which can be yours for Rs 46,852 if you can survive the painfully long waiting period. The Duro, despite its Rs 44,984 price tag, is just not appealing enough and doesn’t command your hard-earned money with conviction. So at the end of this exhaustive test, I must thank my colleagues for being absolutely sporting, abandoning a good few hours of sleep and posing for that lead shot. And I announce the Suzuki Swish as the winner of this shoot-out. Case closed.