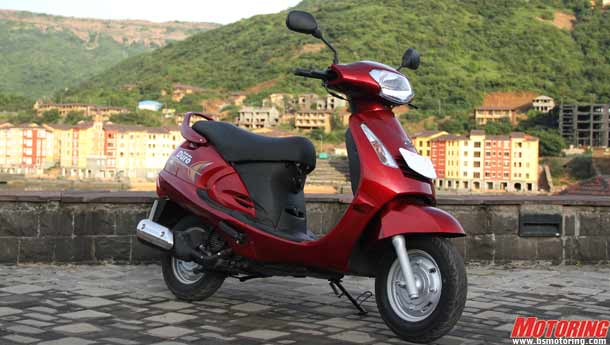 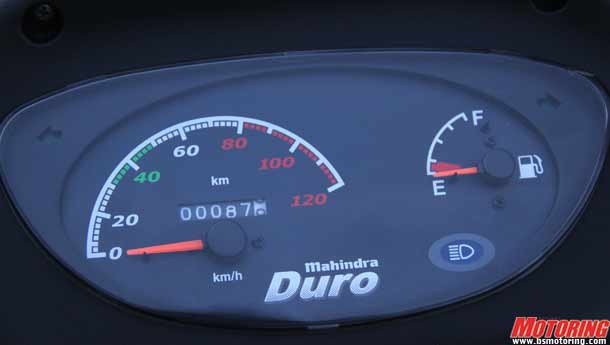 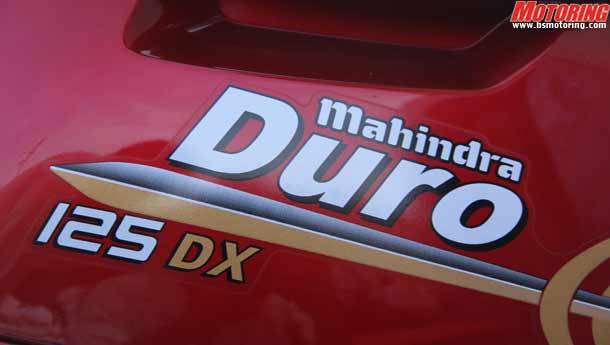 Mahindra 2 Wheelers took over where Kinetic Motors left off. Under collaboration with Sym, the Flyte and the Rodeo were under the spot lights in showrooms while the Duro, which was earlier called the Nova, was fitted with the 125cc motor from the other two scoots and that was pretty much it.

The Duro continued to sell with the earlier trailing link front suspension and although the engine was refined, the front suspension setup left a lot to be desired. But things have changed for the old workhorse, and it has now been transformed into the New Duro 125 DX.

I'll start off with the most obvious - the styling. The front end of the Duro has been completely revamped and is now flat with a few contours towards the periphery. The headlight is now wider for a better beam in the dark and if you have been observant, you will also notice the new telescopic forks in lieu of the old trailing link setup.

This one addition, the telescopic forks, have changed how the Duro moves completely. The scooter is now more stable around corners, and over minor undulations, you will barely notice the bumps as you go by. Over the deeper ruts, however, the suspension crashes in and then thuds back out which can get a little tiresome over an extended period of time.

The engine, although largely untouched internally, features a new dual curve ignition system along with a redesigned air intake tract and updated carburettion. Sadly, the refinement of that engine, which is almost butter smooth in the Flyte and the Rodeo, seems to have gone forever in the Duro. On level ground, the engine accelerates quite briskly to an indicated 60 kph and then it takes awhile to go further. Up inclines, though, the engine needs a fair amount of stick to keep it going.

Build quality of the Duro has vastly improved, with a better paint finish and richer plastics. The panel (which are of plastic) gaps, although present if you look hard enough, have decreased appreciably since the last time we rode the Duro.

All in, the Duro is a good scooter which has now been improved greatly by Mahindra 2 Wheelers. Although a little rough around the edges, the Duro should be included as one of your options if you are on the look out for a good run about scoot. Pricing hasn't been announced yet, though.