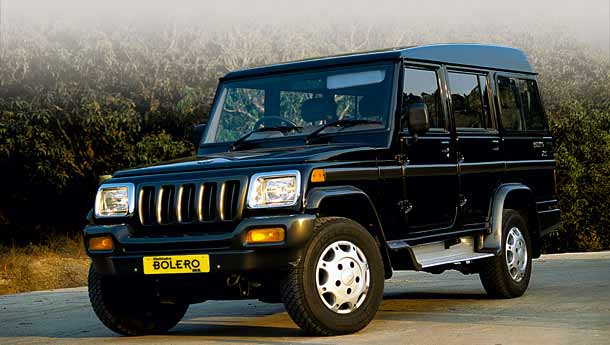 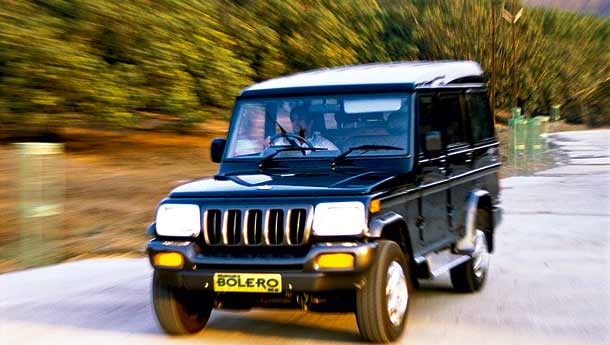 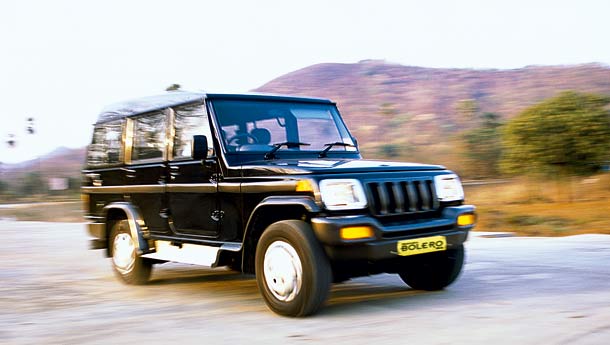 Mahindra have a no-frills, just-get-the-job-done UV in the Bolero and as is only right, they are making the best of it. Last year, we got the Bolero-based, soft-top Invader which was, supposedly, Mahindra’s attempt at doing a Maruti Gypsy. A diesel-powered Gypsy. And by all accounts, it’s been a successful attempt too, with the Invader doing extremely well in certain parts of the country. Which brings us to the Bolero XLS. The
sport-ute segment taken care of, it was time to look at the people-mover niche, which is what the XLS caters to. The thing is big – it has three rows of seats which can take three occupants each – making it a nine-seater. The ‘ordinary’ Bolero can only seat seven people.

An extended weekend was coming up and test car keys were up for grabs. Bijoy wanted the Scorpio, Srini wouldn’t let go of the Zen and Pablo rather fancied the City. Which left the poor XLS, which nobody wanted to drive. I was none too happy with being fobbed off with the large Bolero’s keys but it was either that, or a ‘dheemi local’ from Wadala to Belapur. Mumbai-ites will know what I’m on about but if you aren’t from Mumbai, get this – boarding a Navi Mumbai-bound local train from Wadala at seven in the evening isn’t an entirely happy experience. The possibilities are infinite – your feet may get trampled upon, your shirt may lose a button or three, you may get a well meaning elbow in your face and you just might dislocate an arm. So the Bolero XLS it would be.

Easier done than said
The XLS looks like any seven-seater Bolero. Except for the extended rear, that is – the standard Bolero has been extended at the back, to accommodate a third bench. Here, I must say that they could have tried to do a cleaner job of this extension thing – the extension seam/joint on the body is clearly visible, which can’t be such a good thing. All said, it still looks pretty much like a standard Bolero and perhaps sticking with the Bolero family look is the right thing to do for Mahindra.   In these days of relative poverty (home loan EMIs can be cruel, sob...), the first thing that puts a smile on my face is a well-fed fuel tank, and that the XLS had one is the first thing I noticed after getting into the car. Yes! Now all I had to do was wade through 35 km of bumper-to-bumper traffic. Like all recent Mahindras, the XLS started up without trouble and the laid-back chuga-chug-chug of that old workhorse, the Bolero’s Peugeot-derived XD-3PH indirect injection (IDI) diesel, remained faintly removed from the cabin. No music in here, but power-assisted steering and air-conditioning meant that my commute would be fairly painless. I gingerly manoeuvred (it’s big, remember?) the car out of our parking lot and got on my way. The driving position is bolt upright, which, combined with the XLS’ high stance, is not so bad for driving in heavy traffic. However you do have to reach out a bit far to shift gears, which... er, can be a bit of a bother at times.

Usually, when I first get into a brand new car, I have to take about five minutes figuring out the controls. In the XLS, you don’t have to – everything’s so basic and straightforward. Turn a knob and you switch on the AC, turn another knob to adjust blower speed, the speedo tells you the speed you’re travelling at and... that’s about it really. Our test car did not have central locking or power windows. Initially, I felt a bit foolish driving along alone in a nine-seater, but soon, the car put me at ease. Laugh if you will, but driving the Bolero XLS is somewhat like chugging along on a Harley-Davidson. The credit goes to the engine, of course. The low-revving 2498cc diesel produces an unhurried 72.5 horsepower at 4000 revs and a more relevant 15.5 kgm of torque at only 2000 rpm. To give it some perspective, the torque figure is quite a bit off the Viva CRDi’s
19.1 kgm (which the Hyundai’s 1493cc turbodiesel makes at 2200 rpm), but is adequate for moving along at a leisurely pace. The XLS is a people-mover, a UV, so there’s absolutely no point in revving the engine and racing the traffic (such antics are best left to drivers of the now-defunct City VTEC. Ha...!). What the XLS does best is to get you from home to office, and back, in a calm, relaxed manner. Sounds impossible? That’s what I thought till I drove the thing. The whole package is so unstressed, its just puts you in a Zen-like (the monk-stuff, not the Maruti) state of mind.   The gearshift is notchy and imprecise but you don’t have to shift all that much – in city traffic, the XLS is mostly happy chugging along in third or fourth, with the occasional foray into fifth. Relaxed cruising at 80 kph is what the XLS does best. Above 90 kph, the engine starts droning rather loudly and NVH becomes obtrusive, but you wouldn’t be doing triple digit speeds in town, would you? I amaze myself when I say this, but the Bolero XLS could actually be quite a good city car. If you’ve already got a Santro/ Wagon R/ Alto, that is. And what your small hatchback certainly won’t match, is the Bolero’s sheer people-moving capacity. What other car can seat nine people now? Agreed, it isn’t the most comfortable of cars, but the XLS offers decent ride comfort. With leaf-springs at the back and independent coil spring set-up at the front, the big Bolero’s ride is surprisingly compliant. It’ll toss you around a wee bit if you are in it alone, but fill it up with people and it’s all right. I’ll admit ride quality is better than I had thought it would be. The XLS rides on 15-inch wheels (shod with 215/75 Bridgestone Dueler H/Ts) which are suitable for varied terrain.

Chug along now...
It’s a heavy UV (note, there’s no ‘S’ preceding the ‘UV’), so handling traits are best left undiscussed. Well, okay, if you insist. The Bolero XLS handles like a, well, like a nine-seater Mahindra UV would. You stay sensible in the thing and it’s benign. Start throwing it around and the XLS will bite you. Hard. The low-effort steering is also largely free of feel, so at high speeds, you don’t really know if the car will go in the direction you want it to. At speed, I wouldn’t try sudden lane changes in this car. Especially not if it’s wet. And definitely not if it’s a weekday. Or a Sunday. Brakes (discs at front, drums at the back) too, are adequate, but do not encourage inordinate heroics. Which is just as well – it’s not that kind of car. I’ll repeat exactly what I said about the Invader’s brakes when I tested the car a few month ago. Panic-braking from high speeds, especially in wet weather conditions, could easily catch out the unwary. More progressive pedal modulation and better feel would help.

What about the ‘people mover’ bit? Well, tour/taxi operators are going to love this one. Nine people can  be made to fit in there, though I’d be happier with six. Two to a bench should be perfect, unless I’m travelling with Janet Jackson’s dance troupe. Jokes apart, nine people in the car would perhaps be okay on shorter jaunts, but for extended journeys, six would be infinitely more comfortable. Legroom in the second and third rows is rather restricted, especially given how long the car is. Getting in the third row can be a bit of an effort. Part of the second bench folds up to provide ingress to the third and if you are young and lithe and slim, you shouldn’t really have much trouble getting in there. For last row passengers, the rear wheel-arches intrude on the legroom available. Also, the aircon gives up after the second row, so you don’t want to be at the back for long.

Surprise package?
I got into the Bolero XLS thinking I’ll somehow endure it for whatever length of time I’m stuck with it. I ended up liking the car. It’s a simple, basic UV that lets me saunter along in traffic without too many worries. I commute more than 70 km a day in extremely congested, slow-moving traffic and despite its size, the XLS is easy to thread through a mad mix of BEST buses, autorickshaws, scooters, motorcycles, cars and what have you. Given its sheer heft, people generally give the XLS a wide berth. Random two-wheelers don’t dance across your path, cars don’t try to cut their way across and even truckies seem not so inclined to bully you down. Fuel economy too, is not bad – you get about 9 kpl to the diesel litre (in city traffic, with the AC switched on) – good for the wallet, eh?

It certainly isn’t the most refined UV around (the considerably more expensive Toyota Qualis still occupies that slot), it isn’t fast (110 kph is about all it’ll do), but the Bolero XLS gets the job done. At Rs 4.88 lakh (ex-showroom, Mumbai), it’s fair value for money. I definitely wouldn’t want to embark on long, highway/ expressway journeys in one, but in the city, the XLS just makes me smile at 70 kph, with traffic making way for it. If you have a large family that likes going out on lots of picnics, if you drive in the city a lot, and if you already have a small hatchback or midsize car, you just might want to consider the Bolero XLS as your second runabout.