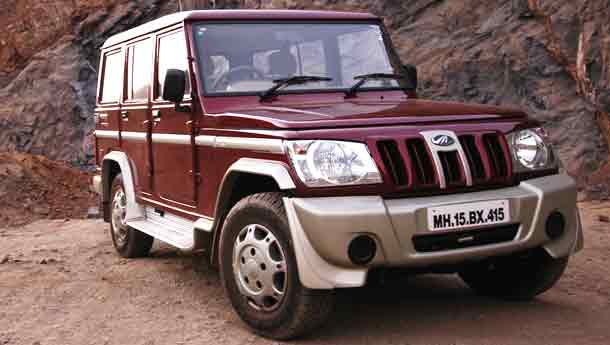 Two years back when Mahindra announced a JV with Renault, a lot of people scratched their heads, wondering whether the marriage was one of convenience alone or a marriage of two like-minded companies. After driving the new Mahindra Bolero DI Turbo SLX, I'm happy to report that the managements of the two companies think alike as well.

Exactly how do they do so? One needs to understand the inherent quirks of the two vehicles, the Bolero and the Logan. Get into a Logan and typical French oddities abound. How about a door handle that feels more like sliding your hand into a crevice, AC knobs that turn in the opposite direction than standard and an ignition keyhole that has a 20 degree upward incline? It's not very different in the Bolero either. You sit too high, the steering feels too large, the gear lever is too low and the stereo which was earlier placed right at the bottom, has been placed at your lowest rib level. That is an achievement, but what is not is that it too has a downward degree to it. Like the Scorpio, the A/C vents have very limited movement and are unable to direct chilled air to your face. So much for improved ergonomics.

Start the engine and you will barely notice that the power is some 9 horsepower down. It doesn't make a difference though, the 2523cc diesel engine receiving a turbocharger to improve maximum torque as well as the power spread. But there's a catch. The maximum torque is spread over a narrow 60 rpm band, an unheard of characteristic. Somehow that doesn't seem to deter overall driveability, as the Bolero goes about not only chugging along with city traffic but also effortlessly doing 80-100 kph with a full complement of seven on board for hours. Try the coin-brake test and be sure it won't even come close to it, the idea being to engine brake first before hitting the anchors. No drama though with the suspension - ride quality improves substantially as speeds increase and it can even teach its bigger brother, the Scorpio, a lesson or two.

Quality niggles such as a vibrating rear-view mirror in the 1500-2000 rpm band, a centre console that can be moved off its base horizontally by 2-3 cm and indicator stalks that could do with better switches don't mar the fact that a starting price of Rs 4.5 lakh still makes the Bolero a good people mover proposition. But more than that, it brings to the fore a peculiar trait on its last legs in modern vehicles - character. The mechanical edge that still permeates, despite years of re-engineering, still brings back memories of age old Mahindras. Call them quirks or deficiencies, but that's what has made Mahindra and one hopes to see these idiosyncrasies continue. And there's no doubting that with a partner like Renault, some of their beliefs have been re-asserted.