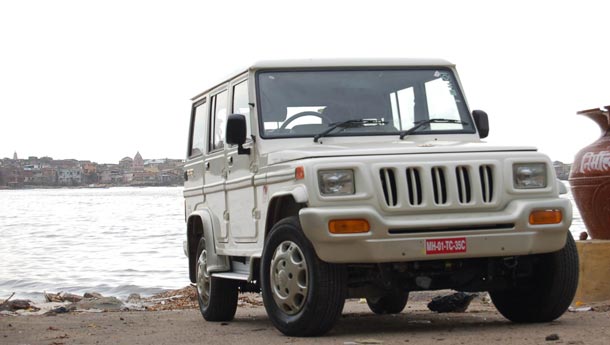 Have you ever seen or read Samuel Beckett’s play Waiting For Godot? It’s an absurdist tragi-comedy in two acts, in which a couple of tramps wait under a tree for the arrival of one Mr Godot. While waiting, they variously quarrel, think about committing suicide, eat carrots and gnaw on chicken bones. Godot, meanwhile, never shows up. That’s it.

That may sound like a lot of unrelated blather, but driving the Bolero SLX DI reminded me of the play, except that it was now called Waiting For Fun. It was a tragi-comedy (more comedy than tragedy) in one long act, in which I sat in the driver’s seat awaiting the arrival of one Mr Fun. While waiting, I variously changed FM stations, ate a chocolate bar, cursed a bit and stomped on the accelerator pedal. Fun, meanwhile, never showed up. That’s it.

I’m kidding, of course – that isn’t quite ‘it’. Having replaced the old workhorse 2498cc mill (which produced 72.5 bhp at 4000 rpm) with their proprietary MDI 3200 TC direct injection, turbocharged unit, Mahindra have done the Bolero a favour. The ‘new’ 2523cc, environment-friendly engine (introduced to comply with BSIII norms) puts out a lowly 63 bhp at 3200 revs and although it still isn’t much fun, it’s an improvement over the old unit. To be fair, you’re unlikely to be too bothered by this in slow-moving city traffic. Out on the highway though, where Boleros tend to be most used, it’s a real problem. You have to plan an overtaking manouevre well in advance, and if you happen to be in a touch-and-go situation – well, let’s just say that you’ll find religion pretty quickly.

To give it its due, the Bolero was never built to storm the street-racing scene. The new engine offers up 18 kgm of torque at 1500-1800 rpm, which translates into sub-10 second 0-60 kph runs. That’s pretty decent for a vehicle with the aerodynamics of a small house. What it also translates into is an engine that’s happiest chug-chugging along in traffic, on highways, up hills and down slopes. It’s quite unstressed and never complains unless you really put pedal to metal, at which point it’s audibly unhappy. This is a powerplant with a single-point agenda - calm, unhurried driving, preferably down arrow-straight highways, with little or no traffic/ obstacles to halt the car’s progress. If you treat it as such, you’re likely to be quite happy with it.

The power-assisted steering is effortless at low speeds, but upping the ante starts to anaesthetise it considerably. It goes all vague on you and at speed, it’s anybody’s guess as to what exactly is happening between tarmac and rubber. The ride quality, on the other, hand presents no real complaints. I took the Bolero through some pretty badly maintained roads, at a good clip, and it went through without being thrown off kilter. On smoother tarmac, it’s a comfortable experience inside the cabin. The car’s suspension – leaf springs at the back and independent coil springs at front – handled a variety of road conditions with confidence. If I were to point out any downsides, it would be that the suspension is a little too soft.
Let’s face it, the Bolero is no WRX Sti. Going around corners is a process best approached sensibly, because at anything over 50 kph the car feels like it’s cornering in two different halves – the front end commits itself, but the rear takes a while to realise that it needs to fall into line as well. The same principle applies to lane-change manoeuvres. Try a fast one and the car starts losing composure and bobbing around, requiring some strong-arm stuff with the steering in order to restore normal service. The brakes (discs up front, drums at the back) are more than adequate, although more progressive modulation on the pedal would be ideal.

Things start to look up considerably when you consider the Bolero’s interior spec-sheet. It comes with keyless entry, air-conditioning, power steering, power windows, a four-speaker audio system and central locking – an excellent feature list, considering this is a middle-rung vehicle. There’s acres of headroom inside, although rear legroom isn’t of the highest order.

Ergonomically, there are some elementary goof-ups that could have been easily avoided. For example, who puts a music system almost at floor-level, for heaven’s sake? The hand-brake’s also too low and far forward, requiring some serious bending to operate. The clutch pedal’s set too far to the left and too high off the floor, as a result of which your left leg gets a more rigorous workout than is strictly necessary. The facia looks dated, the aircon dials are badly configured (although the air-conditioner itself is first-rate) and overall, you get the feeling that a lot more thought and effort could have gone into this cabin.

However, here’s the interesting part. Although it seems like I’ve been complaining endlessly, I actually like the Bolero quite a bit. At Rs 5,16,000 (ex-showroom Pune), the Bolero SLX is extremely good value for money. No matter what we put it through, it refused to return any less than 10.5 kpl in the city, which is good. The best it gave us was 13.5 kpl, which is even better. It’ll seat six people in reasonable comfort, so it makes sense if you have a large family. It’s rugged, so you can go almost anywhere in it. It has power everything, a great AC and a decent audio system (in sound terms, that is, not placement), so you can drive around in comfort. The engine is reliable, spares are cheap and you’ll find a mechanic/service centre almost anywhere in the country, so maintenance isn’t an issue. It’s quite nice looking, especially from the front three-quarter, although some bigger wheels would fill out those huge wheel arches better. Above all, it’s an honest machine. It makes no tall claims, goes about its business (not exactly quietly) and does most things well. If you’re the sort who wants maximum bang for buck, without being overly concerned about performance or image, then the Bolero makes a very good case for itself. After all, it isn’t the largest-selling UV in the country for nothing.