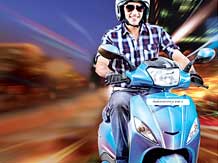 For the first four months of this fiscal, the world's largest two-wheeler maker by volumes, Hero MotoCorp (Hero) recorded a year-on-year fall of 3 per cent in domestic sales. However, the company says that its retail sales (to end customers) have for the last two months grown by 7 per cent. Hero's category bestsellers - Splendor and Passion - have seen an industry-wide demand slowdown while some of its other products, launched much later, have come into their own.

When Hero had split from its joint venture partner of 26 years, Honda Motorcycles and Scooters India (Honda), three years ago, two concerns had clouded analysts' predictions for it: One about its technological prowess and the other its ability to launch an identity through new products sans its erstwhile Japanese partner.

Today, Hero has added to its scooters portfolio with the Maestro in 2012. Scooters along with its 110-125cc motorcycle segment is bucking the auto slowdown for Hero to see growth even in dispatch (wholesale) numbers. The company has announced plans to make its own engines and launch more products, and it is expected to "remove concerns about Hero's ability to attain technological competence," says IIFL's analyst Joseph George.

Hero's sales momentum amid the slowdown is being propped up in no small terms by its two scooter brands. Maestro, a scooter for men, which joined Hero's Pleasure (launched in 2006) has been able to crank up volumes to the tune of 28,000 units per month in a year's time. The Pleasure which brought in the tagline of 'Why should boys have all the fun' grosses sales of 30,000 units a month and is a mainstay for Hero.

Both the scooters have grown in double digits. The two products have helped the company more than double its market share (please see chart for Hero's scooter sales).

Hero's bread-and-butter commuter segment, which include its key brands Splendor and Passion, has faced headwinds from the prolonged downturn. Sales in the 75-110cc segment (which, in addition to its key brands, also includes the Dawn and Deluxe) were down 12 per cent year-on-year. Analysts blame the uncertainty in the economy as dampening consumer sentiment. Anil Dua, senior vice president, sales, marketing and customer care explains that the price-sensitivity among commuters buying lower-priced bikes go up during these times. At the other end, bikes with engines larger than 125cc such as its Achiever, Hunk, Extreme and Impulse too were down a steep 37 per cent owing to the slowdown. The value-seeking customers, who did not postpone their purchase seemed to have opted for the mid-segment 110-125 cc bikes comprising the Super Spendor, Glamour and Ignitor.

But Hero has just two scooter brands against its motorcycle portfolio of over 13 brands. Rival Honda, which dominates the scooter segment with 50 per cent share, has four scooter models. Dua admits that the portfolio is small but believes that with demand outstripping supply, the company will have to work on building the two brands, and increase the capacity to meet demand. Hero is already increasing its current 60,000 units-capacity to 70,000 units a month.

Hero also has 12 new models/variants lined up for 2013-14 across its product segments and is likely to flag the launches off during the upcoming festival season. A hybrid two-wheeler called the Leap is expected to be one of the new additions to scooters, though Dua refuses to divulge details. 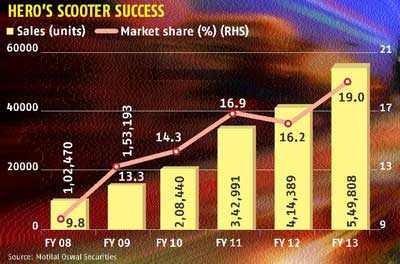 The focus on scooters comes when the share of scooters in India's two-wheeler market has been rising over the last few years, from 15 per cent in 2008-09 to 21 per cent in 2012-13. In the quarter ended June, 2013, it moved up further to 22.5 per cent. JP Morgan's Aditya Makharia and Arjun Bhatia believe that with urbanisation, rise in women riders, higher fuel efficiency and improving per capita income, the penetration of scooters will only increase and at a pace faster than motorcycles.

Analysts say Hero's aggressive launch plans, rural exposure which is the highest among peers and its distribution network of 5,500 touch-points make it the best-placed to benefit from the expected demand recovery on the back of a good monsoon.

Hero has also been working on a retail push. Dua says a warranty programme, kicked off in April 2003, has helped. Called the Hero Advantage, the programme provides a warranty of 5 years or 50,000-70,000 kilometres whichever is earlier, across its scooters and motorcycles range. Joseph George, analyst at IIFL Institutional Equities believes that no other two-wheeler original equipment manufacturer offers a standard 5-year warranty. While most have a two-year warranty, Honda has an extendable warranty of an additional three years for an extra cost.

The launch of Hero Fincorp facilitating access to auto loan companies has helped too in the tough credit situation of consumers. Roughly, a fifth of its sales are on credit according to Dua, who expects it to rise.

But Hero's run won't be easy. Honda has been working overtime to spruce up its own portfolio after the split. It has recently launched the Dream Neo and Activa i at different price-points aimed at segments Hero is strong in. Makharia and Bhatia of JP Morgan say that these models are priced in line with the competition in the scooter/mass-market bike segment - thus addressing gaps in Honda's portfolio. The Activa i will compete against Hero's Pleasure in scooters,while Dream Neo will take on Hero's Splendor in motorcyles.