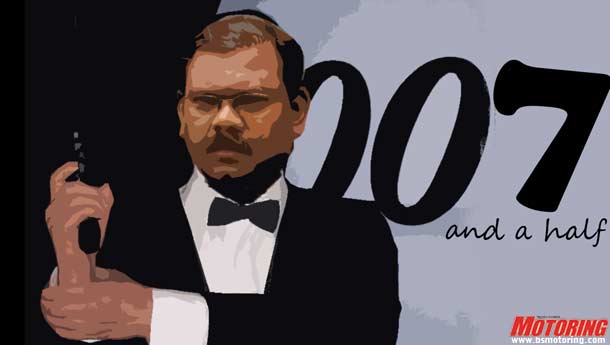 This is an arm that’s activated by a button on the dash. The arm is located at the base of the A-pillar and at the end of the arm is a currency holder. Cop catches you for breaking a signal? Press the button and the arm unfolds to hand over the requisite amount. Bingo – everybody’s time is saved and you can always say that you did not hand over a bribe to anybody.

Useful tip: Before you head out for the day, fill up the currency holder with the necessary amount. Don’t do silly things on the road beyond what you have filled up the holder with.

Who’s bothered about wearing seatbelts and paying extra for airbags that could save lives? Let’s look at it the other way: we’d rather save our car from scratches, dings, dents, etc. To do just that is this terrific idea. The external airbags are located all around the car. When the sensors sense that a something is coming at the car at more than 5 kph, it opens up, thus preventing damage to either party.

Useful tip: You can claim a discount on the insurance premium if your car is equipped with this feature.

This is a simple low-cost variant of Night Vision systems in expensive cars. It’s essentially meant for those who drive extensively on Indian highways at night. Indian trucks are eco-friendly, as they save energy by not using their tail-lamps. But this poses a problem to other drivers who can’t see them. The ITD, with its superior radar, can detect these trucks in advance and warns you to switch lanes before you become a chapatti.

Useful tip: Don’t want to spend on it? Then don’t drive on our highways at night.

These are permanent stickers that could look like freshly laid cowdung. Since Indians revere cows, we can have any other type of dung. These are issued strictly to honest traffic policemen. If they see somebody breaking the law on the road, they won’t take a bribe and they won’t take a fine either. They will stick these fluorescent and extremely disgusting stickers on the car and everybody who has it on their car will feel shameful for being so, er, excrementy, on the roads.

Useful tip: The dung and the colour can vary depending on the size of the offence.

In this system, the horn is directly connected to the car’s speakers. When you blow your horn, it is heard in the car as well. So if you press the horn with a particular intensity, it will reverberate in the car as well. It is an invention that will give us Indians an idea of how noisy we are on our roads. (Note: doesn't work on the Alto, you can hear the horn in the car clearly anyway.)