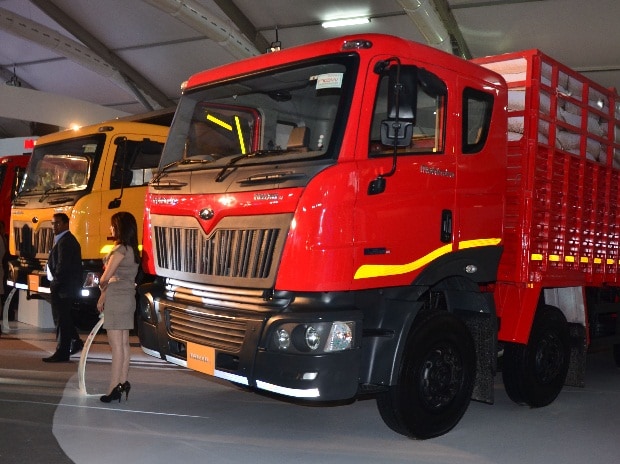 Mahindra & Mahindra (M&M)’s December quarter performance was lower than expectations, impacted by the note ban and higher commodity costs. Revenue grew by 1.16 per cent to Rs 10,587 crore as overall volumes grew 1.5 per cent, led by the farm equipment (tractors) segment. M&M sold 21 per cent more tractors in the quarter compared to the year-ago period, though utility vehicle (UV) volumes were a drag, falling about 12 per cent.

Tractors currently account for about 54 per cent of overall volumes. What has impacted M&M more than other automakers is that 60-65 per cent of its sales comes from rural areas, which has been the most impacted from the note ban slowdown. The management indicated there had been a gradual improvement in sales from the November-December period and sales should recover fully by the end of FY17.

For tractors, the company has revised the sector’s volume growth guidance from 20 per cent in FY17 to about 16-17 per cent, while they maintain a 12-13 per cent growth for cars and UVs for FY17.

The company announced that it will invest Rs 1,500 crore to expand its Nashik and Igatpuri plants to manufacture a multi purpose vehicle code named U321.

Given the muted revenue performance and higher raw material costs, operating profits were flat at Rs 1,449 crore. Raw material costs were up 1.45 per cent over the year-ago period and 20 basis points higher (at 68.57 per cent) as a percentage of sales. While some of the higher commodity costs were borne in the quarter, the March 2017 quarter could see a bigger impact and will impinge on margins. Higher commodity, employee and other expenses meant that margins fell 20 basis points to 13.7 per cent, lower than analyst estimates of more than 14 per cent. The company did not have the benefit of excise duty concessions at its Haridwar plant as compared to the year ago quarter. Excise duty benefits ceased from January 1, 2016. Poor operating performance and higher taxes reflected on the net profit, which fell nearly 6 per cent year-on-year to Rs 801 crore.

M&M indicated it had taken a price hike of about one per cent in January to overcome the cost pressures as well as the higher costs on account of product changes to meet the emissions deadline of April 1, 2017. The management indicated that though the company passes on commodity costs to consumers, it will have to calibrate given the competitive intensity, especially in UVs before taking any decision to opt for a further hike. While the company has achieved its highest quarterly market share of 44 per cent since 2007 in tractors, it is losing out to rivals in UVs. Discounts in the auto segment could increase if volumes continue to be sluggish as they are now, and this will be a further hurdle for overall margins of M&M.

The tractor segment, given strong rabi acreage as well as higher minimum support prices, should hold up and gather pace as cash comes back into the system.