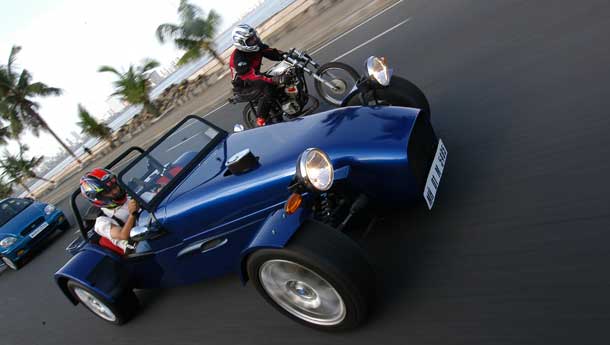 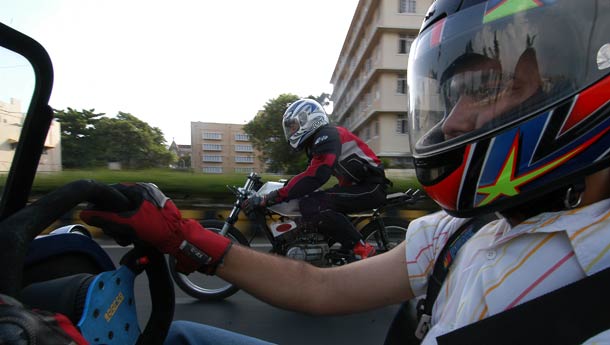 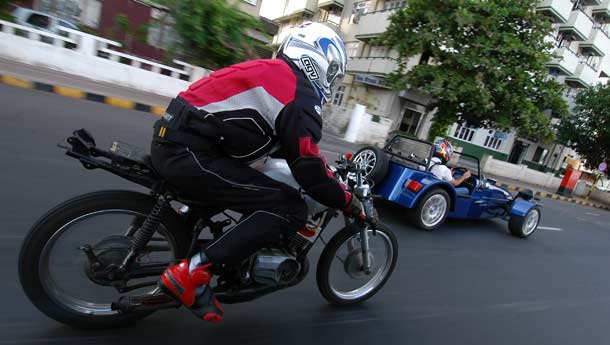 I am sitting inches above freshly-laid tarmac in the Valko, waiting for the lights to turn green for what seems to be a century. By now, a lot of traffic has built up behind me. But inches away from my right ear is a Yamaha motor that sounds like it’s being denied free will. However, Joshua’s right wrist is hinting at something special. Just then the light changes and it’s a dash to the next signal.

Some seriously ferocious throttle action and quick gearshifts mean I have left most of the traffic behind, but the RX has positively annihilated me. And as I open my mouth to gasp, the anticipated intake of breath is pre-empted by a rush of fume-rich atmosphere. Suddenly, the basic process of breathing is rendered useless by the unearthly forces at work around the Valko Superlite 1300.

At BSM we’ve been on some pretty fast cars and bikes, but today the lack of a proper race track is more apparent than ever – never before have we got machines that are so alien to their surroundings. The similarity of course is that both these machines have been built by individuals not too different from you and me.

The Valko pays homage to the evergreen Lotus Seven, a car that for the past 50 years has been replicated and rebuilt end over end. For ages, people have been slotting various motors into that simple shape. All sorts of engines, from Cosworths to every Jap motor that measured 11 on the loud dial, seem to have made their way into various forms of this enlarged go-kart. What follows generally is the utter humiliation of Ferraris and Porsches on the track.   Isn’t it amazing how Colin Chapman’s purist expression scribbled on a napkin all those years ago has hardly changed? Sure, there have been cars like that, the 911, the Beetle... but none so basic and down-to-earth as the Seven. You know, someone did get it right the first time around.

This time, three boys from Mumbai have hauled up Chapman’s ageless icon as the basis for their creation. Rizwan and his buddies Vivek and Komiel started off with a 118 NE (you wouldn’t have guessed, right?) and then worked every which way to make it look like this. I will tell you how they went about it in just a bit, but let me just say that the quality of workmanship is immaculate. The paint job, the body lines, the proportions... in fact, everything about the way it looks is so good it could easily pass off as a proper Caterham import. And in case you are appreciating the metal work, let me tell you that it’s actually fibreglass.

The chassis is a space-frame while donor bits come from all over the place. The engine is an ultra-smooth Esteem unit that’s been ported and polished and breathes off a K&N. The gearbox is from a Gypsy (front-engined, rear-wheel drive, duh!) while the differential belongs to the NE. The suspension though comes from the perfect place – it’s an actual Caterham unit.

The other machine here is an RX135. Or whatever little that’s left of it. And this one is even more simplistic. Anything that doesn’t help it go fast or makes it legal to ride has been dumped. There is no mudguard, no switchgear, no meters, not even a keyhole. There isn’t even a seat, just a beaten panel bolted across the chassis to park yourself on. Heck, no side stand, even! So every time you want to park, you have to hunt for a tree or a lamp post to lean the bike on. This thing isn’t slimmed down, it’s all but disappeared. What’s left on the motorcycle however hasn’t been left alone. The engine is heavily ported, the expansion is specially built for the barrel and there is the mandatory filter too. The result is a machine that has reportedly recorded 138 kph on the speed gun. Rarely has an RXZ tank ever been that fast.

The  best thing about both these machines however, is that they weren’t built by some super-rich kids sitting on a pot of money. Rizwan plays interior designer by day, while Tavish on the other hand is just a teenager who built his motorcycle by saving up on pocket money.   Oh, and the other common thing is that both these machines are an absolute hoot to pilot. The Valko drives like a 65 bhp skateboard. Firstly, you don’t sit in the car, you plug yourself into it. It’s so low, you could put your hand out and have your nails filed. The interior (and I use that in an extremely loose sense, since there’s no roof to make it so) in true roadster fashion is bare-basic, yet with a Sparco steering wheel, master kill switch and a starter button, it is adequate. The only safety bits are a four-point harness, a roll-over bar, and quick reactions.

Driving the Valko is actually a bit scary at first, and it takes a while to get used to how low you sit. Stones flung up by the traffic aim straight for your head and if the driver of that Cayenne behind you isn’t paying attention, you’re street pizza. But hit the open road and it’s exactly the lack of height that adds to the whole experience. And in spite of being so low, the Valko didn’t bottom out even once. Also because you sit so low, the sensation of speed is amplified and there is ample elbow room to allow an elbows-in-the-wind driving style.

The RX on the other hand goes like it’s a regular feature on Looney Tunes. You get on the gas, wait for the power to come in, wait a bit more, a bit more and just when you are about to give up on it, the power kicks in so hard it almost throws you off. Power band? You bet! More like power banned. But seriously, this thing covers distance like a road runner, leaving you giggling like a teenager every single time the throttle hits its stop. And it’s the same story in every single gear. This bike is so good, it’s a testimony to two-stroke performance and the ‘less is more’ philosophy.

But let’s take a moment to reflect on what these guys have done. In a country where there is one race track for every 500 million people, they have gone ahead and built machines that are so focused, they smell of pit-lane. What we have here aren’t mere machines, they are realisations of boyhood dreams of every true petrolhead. The result of their creators ignoring the ‘Don’t try this at home’ fine print. I might be getting a bit carried away here, but to create something from nothing is remarkable. So Josh, at the next signal then?