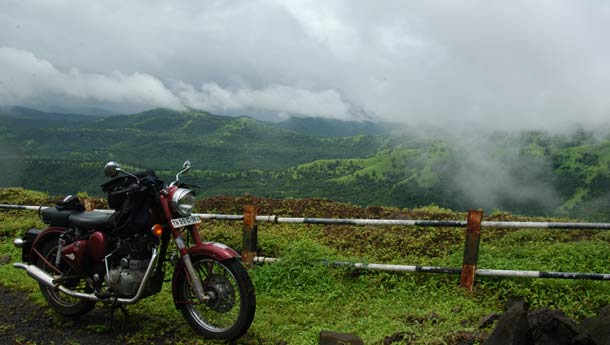 That narrow little half-a-lane backroad that turns off the one-lane ‘state highway’ has always fascinated me. It probably goes nowhere and usually things do turn out that way, but sometimes, you discover that some of the prettiest sights you’ll ever encounter are on that same road. I’ve been out touring on a motorcycle and the case usually is to reach somewhere in time, even though that destination can be a loose definition. I have that destination stuck in some corner of my mind, even if I try and ignore it. The beauty of taking that winding country path is exactly what most people find pointless as an idea - it usually goes nowhere!

I’ve experienced the power of this ‘going nowhere’ style of motorcycle touring previously but on the recent Royal Enfield Tour of NH17 ride, with fantastic locations to get lost in, I realized its true potential. Thumping along on a Classic 350, I got separated from the scattered pack, picked up on false directions from a local and chugged away on the 350 to go down a path unknown. The 50-odd kilometers that followed were astoundingly good. Specks of rain on the visor, that monsoon aroma in the air, deep rich treeline covering the vast expanse of the land and the nicely surfaced tarmac winding along the sea coast, through forests onto hilly sections; not one sight that I got bored of. In retrospect, it was one of the best mistakes (if you can call it that) I made on the trip and thoroughly enjoyed myself in the place where the streets have no name. I somehow rejoined the planned route later but the sweetness of that ‘getting lost’ feeling lingered around for quite sometime afterwards.

For a week, the 20-odd riders on the RE NH17 ride experienced the parts of coastal Maharashtra that quite a few people have either forgotten or just don’t know about or worse, don’t care about. We’re not talking about the parts you see through your Innova’s window on the way to Goa; we’re talking about the lesser-known nooks and crannies close to the NH17 that truly blossom in the monsoons, experienced on a motorcycle. Living in Mumbai, I felt slightly ashamed of the fact that such beautiful riding terrain was so close and yet so far away from my mind. Most of it isn’t stuff you’d find in a travel book but I’m sure when you’re experiencing it first hand, you’d wonder why.

This was the first time Royal Enfield planned this route and going by how much everyone enjoyed the tour, I’m guessing next year’s calender will include this NH17 tour as well. Tell you what, the grass is greener on that side...