Truck makers are bracing for a long winter ahead as average rentals on most key trunk routes dropped 3 to 4 per cent in the first week of November after the recent festive spike.


The data from the Indian Foundation of Transport Research and Training, a Delhi-based think tank, shows average freight rates on a return trip across regions were down to Rs 85,500 during the first five days of November, compared to Rs 88,450 at the end of October.


Truck sales are likely to remain depressed for most part of the year as economic activity remains subdued, according to analysts.


“The increase in truck rentals seen in the last two months was driven by harvests, festivals and a shortage of drivers as many of them went on leave,” said S P Singh, senior fellow at IFTRT.


With the demand drying up after festivals and drivers returning, idling trucks are back looking for freight. This has created an over capacity, Singh pointed out.


A good festive season, particularly Diwali, helped truck makers correct the excess stock in their channels. But, in the absence of the economic activity picking up, they are likely to keep a tight control on dispatches.


“Overall system stock is now at a multi-year low,” Girish Wagh, president—commercial vehicles business unit at Tata Motors, said in a statement last week.  Dragged down by a sharp 63 per cent fall in its M&HCVs (medium and heavy commercial vehicles) October sales at Tata Motors declined by 34 per cent to 25,983 units against the same month last year. Wholesales month on month were however up 7 per cent in October, compared to September, he said. The inquiries would possibly translate into sales in the coming months, according to Wagh. 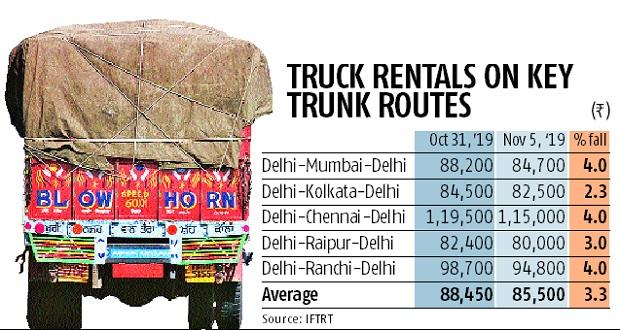 Ashok Leyland, the second largest CV maker, also saw a steep fall in volumes during October. Total M&HCV sales at the firm fell 49.6 per cent to 4,565 units over the same period last year. Auto companies in India count dispatches to dealers as sales.

Extending the declining trend of the previous months, overall CV sales in September halved compared to last year as manufacturers curtailed dispatches amid poor demand. In line with the wholesale sales, registration of commercial vehicles saw a 18.5 per cent year-on-year decline in September, according to the Federation of Automobile Dealers Association (FADA).


The collapse in CV sales wasn’t surprising. The growth of core industries fell to 1.3 per cent in the first six months of the ongoing fiscal against 5.5 per cent in the year-ago period.  In yet another sign of a weak economy, industrial output crashed to an almost seven-year low in August.


However, despite the economic slowdown, Aggarwal is expecting the pre-buying effect ahead of BSVI emission norms, to prop up sales. An executive at another truck firm who declined to be identified backed Aggarwal.