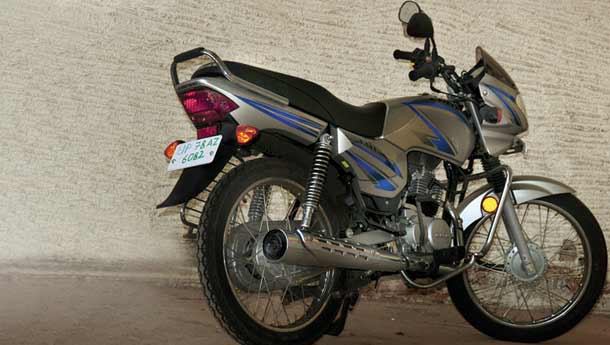 When you go up against Colgate, you have to do more than shine teeth. Anyone challenging the  establishment has to offer an advantage. The current state of our entry-level motorcycles almost precludes price wars.  At a price point of Rs 34,789 ex-showroom, the brand new LML CRD100 is certainly not playing the price game alone.

The spec sheet certainly is attractive. The 104.2cc motor nets a small but precious 5-odd cc advantage. This, crucially, results in the 8.3 bhp power output and the healthy CT100 matching 0.82 kgm. The bike is actually five kg lighter than the  CT100. And it isn’t just the powertrain. Notice the tyres – Nylogrips. Notice the switchgear, they’re nice to a fault, and it even has an engine kill switch. Neither Bajaj nor Hero Honda provide that. The gloves are off then.

Looking at the CRD100, there can be no other conclusion. The styling is with the class, but different. It’d be easy to make a anonymous tag-along bike, but LML haven’t. In the parking lot, whether you actively enjoy its looks or not, you certainly will be able to tell it apart from the similarly specified CT and CD- Deluxes and the Star City. Is it the outright best looking? Er... no. I swing towards the Star City, while at least two testers prefer the CT.

Styling aside, the build and fit-finish are classy. Despite our attempts, we’ve not managed to get a rattle or squeak. But it isn’t perfect. Problems specific to our test bike include the left footpeg, which flew off fairly early, and a recalcitrant speedo that comes and goes. But we’re betting that’s our bike, rather than all CRD100s.

An easy kick should be enough to start the CRD, but you usually need the choke. Most entry bikes are run so lean for fuel efficiency reasons that the humble choke is gaining a frequency of use beyond its wildest dreams. However, once it settles into a clean idle, we’re ready to run.

Which it does. The CRD100 will post a stonking 7.88 second run to 60 kph, which is just 0.24 seconds off the class benchmark. It would have been faster, but the large gap between first and second gears means it picks up well, but loses steam once you shift into second. That gap also manifests itself when you’re down- shifting through the ‘box to a stop. Even if you’re matching the revs, the spike in engine braking caused by the sharp gearing change will rock you forward.   On the upswing though, it’s good. The engine loves revs, and while we felt that rear wheel torque was less than on the spec sheet, it flies in traffic. There are some vibes in the bar, and after about an hour in the saddle, it will tingle your fingers, albeit gently.

Perhaps the biggest irritant is the shift quality. It’s up leaps and bounds from the Freedom, but there’s room for improvement. The shifts are generally notchy and occasionally the lever refuses to return to the centre position, requiring another prod.

But you won’t mind that too much. The light weight and the thrust from the engine allow you to really use the manouverability for everything it’s worth. The CRD can be squeezed into the thinnest of lines with almost no effort and the tyres more or less hold up under all conditions. For greater confidence, we suggest a rear tyre upgrade to a 3.00-18.

Most CRD’s, we expect, will not have the luxury of brilliant corners and will likely be bashed through moonscapes. In those situations, the little LML has infinite bottoming resistance, but in the process, the ride’s a bit stiff. Sharp bumps turn into spikes, although the brunt is dulled to some extent. I cannot help but think that slightly softer spring rates would have returned a plusher feel.

Which brings us to the brakes. Our test bike tended to pull right  sharp-ish under hard brakes, which also tended to throw the tail out of line. But it never felt less than planted and it never got out of hand. We still think any motorcycle over 7 bhp needs a disc, but the 110mm drums do their work without fuss.

So, what’s the score? The CRD100 is a fine little motorcycle competing in a segment full of fine little motorcycles. It does have its strengths, but overall, it joins the CT100 at the class’ peak, rather than outclassing the Bajaj. It is far quicker than the CD-Deluxe and the Star City, but isn’t as refined overall as either.

Fuel economy is not far from the class average. At a steady 40 kpl, the highest we recorded was almost 90 kpl. However, in traffic, that figure falls – overall, 68 kpl.The other significant number is the price. LML’s CRD100 is pegged at Rs 34,789 ex-Panvel (just outside Mumbai). That is about Rs 2,000 less than the CT-Deluxe, and about one grand more than the CT100. Effectively, for two grand less than the CT Deluxe, you get a machine that is almost as fast and equally equipped. Bargain, then.