Liva TRD Sportivo is not what is expected out of it 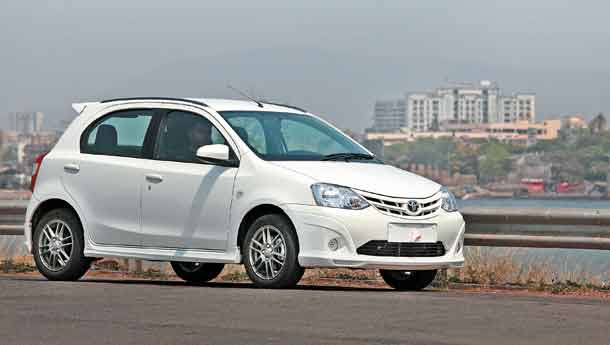 I could evaluate the Liva TRD Sportivo based on two simple, inter-related, questions.

A) Is a powerful, revvy petrol motor really what a manufacturer needs to inject life into a rather staid hatchback? B) If yes, then is this really a hot hatch?

LOOKING GOOD. BEEN WORKING OUT?

I wouldn’t say it’s been to the gym, but it has definitely been to the local Nike factory outlet and picked up some cool gear. The TRD Sportivo badging has brought along with it a set of snazzy 15-inch alloys, cool body kit (okay, the front end is a mess, but the side skirts, roof rails and rear spoiler do look quite sporty) and, best of all, a 1.5 litre petrol engine. There are a few changes to the interiors, too, in the form of a revised instrument cluster, new upholstery that gives ‘sporty’ a fair shot and a new multimedia unit. On the surface, the unaesthetic front end aside, this looks like a good effort.
PACKIN’ SOME HEAT?

Well, certainly. But it feels more like a capable air-pistol than a deadly .44 Magnum. Thanks to its 925 kg kerb weight, the Liva’s 88.7 bhp delivers a fantastic 0-100 kph time of 11.5 seconds but beyond 120 kph, the engine seems to lose steam quite quickly. This is a hot city hatch, surely, if you believe in driving like a maniac, but if you think you can challenge the big boys with this toy, you’re very mistaken. Gearshifts are light, but not smooth as in the Honda Brio (which produces identical power figures) and it’s easy to identify the drop in zip once you’ve gone past the last of the over-revs in third gear and shifted into fourth and, subsequently, fifth gear. It’s quick and fast, but not furious. Not by a long shot.

The Liva has always been quite flickable and with more horsepower, it’s even more fun to snake around traffic in and to throw into corners. However, it’s fun in the same way a game of cricket with your friends is more fun than watching an India vs Australia ODI – you may get some kicks out of scoring a few boundaries and swearing a lot, but the finesse of a Tendulkar and the agility of whichever other cricketer there may exist (not a big fan of cricket, you see) are sorely missing. In this case, because the suspension, steering and brakes are unchanged, the Liva feels like it’s spent weeks munching on steroids and then turned up for the final race wearing loafers with bow-ties on them. The steering feels light – a good thing in the city – but weighs up rather vaguely as the speeds rise and while it’s not something that can’t be mastered, it just doesn’t feel intuitive enough in a car with sporty aspirations.

To go back to the two questions I posed at the beginning of this story, while the Liva in this iteration is a sprightly car, it’s not what’s expected of it. The Liva, by virtue of being a Toyota, was expected to be high on quality, space, reliability and the last word in brilliant packaging. However, apart from offering a set of decently fuel-efficient motors (absent on this variant, of course) and fairly presentable interior space, the Liva failed to deliver on all other counts. I could be the selfish enthusiast and say I love the Liva because it’s a bit understated, has a rev-happy powerplant, and is light and chuckable, but at Rs 6.84 lakh (ex-showroom, Mumbai), it’s expensive for the overall package it offers and I just have to be the selfish enthusiast and say I’d rather have the new Kawasaki Ninja 300 instead. Some things never change, no?