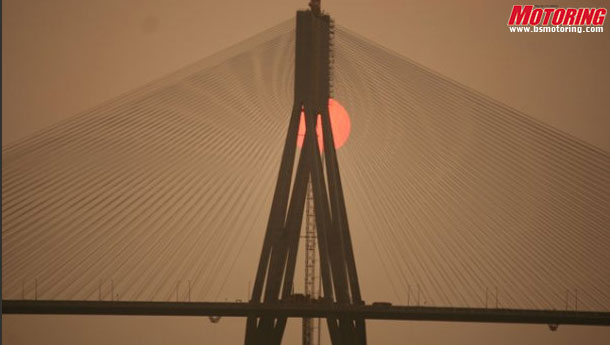 Commuting is no fun, really. Given our traffic conditions, and unless you're lucky enough to have the Mumbai-Pune Expressway, the 'Ring and the Stelvio Pass on your daily putter to work and back, the process is usually rather painful, and about as exciting as watching bananas ripen. However, ever since I've begun using the Bandra-Worli Sea Link on a regular basis, I've been surprised by the fact that the daily commute has been considerably livened up.

Everyone knows about the various controversies that have saddled the Sea Link, so I shan't get into them. All I will say is that to begin with, I too was an unbeliever, as it were – after it was opened to the public, I continued to use the 'old' route to work, because the diversion of traffic to the Sea Link had made it much less crowded, and the commute-time had been cut almost by half. I was also, I must admit, loathe to shell out Rs 50 or more on a daily basis, just to get to work.

Then, one day, I decided to use the Sea Link on a whim – and I've been hooked ever since. For the 4-5 minutes that it takes to traverse its length, I find myself in a peaceful, sunny state of mind which would be impossible to replicate on the old route. The view of the Mumbai skyline is splendid, on a clear day, and during the monsoons, when the whole bridge is enveloped in an ominous cloud, it looks deliciously sinister; you feel like you'll cross the bridge and end up in Mordor or some such. Sure, there are annoyances here too. The speed limit of 50 kph is laughable, for example – that's so slow that you can almost see the tide change as you drive across the sea. Despite the fact that it doesn't really cut the time I spend on the road by that much (you have to drive through frustrating bottlenecks just to get on and off the bridge, in instances of genius-level planning), I'm happy to shell out close to Rs 2,000 a month to use the bridge, simply for the fact that it allows me to get to work in a reasonably buoyant frame of mind, rather than as a slavering, road-raged lunatic.