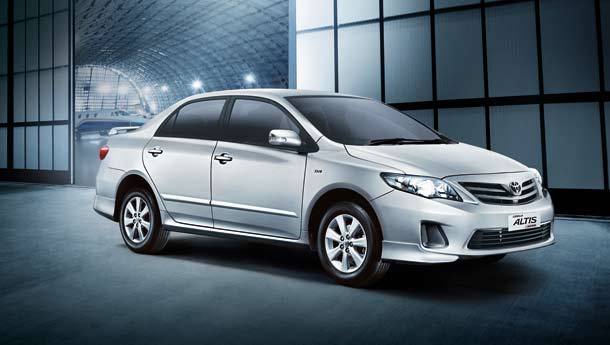 To celebrate 10 years since it was first launched in India, Toyota Kirloskar Motors Limited (TKML) have launched a limited edition Corolla Altis. Called the Corolla Altis Aero, it is priced at Rs 11.47 lakh, ex-showroom Delhi and only 500 units of the said model are being offered, until September 2012.

Available only with the Euro IV, 1.8-litre petrol motor, the Corolla Altis Aero is based on the J grade trim. It gets some external add-ons like a revised front bumper with a new lower grill and skirts, a slightly modified rear bumper with skirts  as well as a spoiler on the boot with an LED brake light. The Aero logo on the boot adds some flair to the package. Other changes include smoked halogen headlamps and rear tail lamps, seven-spoke alloy wheels and a chrome-finish exhaust tip.

On the inside, the Aero gets dual tone seats with the Aero logo. The existing variants of the Corolla continue to remain as they were.