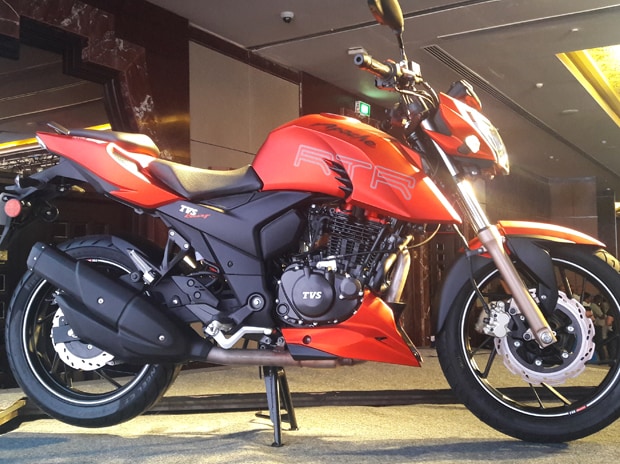 TVS Motor, the country's third largest two-wheeler maker, is optimistic on the period ahead, expecting higher volumes and new launches.

Analysts at Anand Rathi Institutional Research estimate the company's margins are expected to move up to 9.3 per cent for 2017-18 and 10.1 per cent in 2018-19. Though  that is lower than peers Bajaj and Hero (upwards of 14 per cent), analysts say if the company can deliver 10 per cent, it will increase the confidence of investors on the ability of the management to bridge the gap. For nearly 12 years, TVS operating margin has been six to seven per cent.

While TVS declined to offer a comment for this story, the management had earlier indicated that as the top line grew, it expected costs as a percentage of sales to come down and improve operating earnings.

In 2016-17, TVS targets 15 per cent volume growth, against the estimated industry growth of eight to 10 per cent. In FY16, it outdid the industry average, selling 2.57 million two-wheelers, seven per cent higher than the year before.

Analysts at Anand Rathi Research expect annual growth for revenue, operating earnings and net profit of 13 per cent, 34 per cent and 39 per cent, respectively, over FY16-19. Says Saji John, analyst at Geojit BNP Paribas Research, “We factor TVS Motor to clock double-digit volume growth in fiscal 2017, driven by revival in rural demand and ramp-up of sales from the recent launches.”

With the launch in January of TVS Victor, a 110cc vehicle, the company has completed the entire range of offerings in motorcycles, with Star at the entry level, Victor positioned at the mid-segment and Apache in the premium sub-segment. TVS expects Victor volumes of 20,000–25,000 monthly.

In the scooter segment, TVS plans to launch a new vehicle in FY18. At present, it sells the Scooty, Jupiter and Wego brands and the market share is 16 per cent; it hopes to raise this to 20 per cent. During April–September, it reported a volume growth of 11 per cent in this segment. It is targeting an increase in Jupiter volumes from the current 45,000 to 55,000–60,000. Analysts expect FY16-18 annual volume growth for motorcycles and scooters to be 14 per cent each; mopeds are expected to grow 13 per cent.

A tie-up with BMW is expected to yield results in FY18. The company started manufacturing for BMW at its Hosur facility. The first product will be launched after October by BMW and TVS will launch its version of the product by the end of the financial year. Both vehicles will be on the same platform, one of 310cc. TVS currently address the premium segment with its Apache and claims a market share of around 17 per cent, aimed to grow to 22 per cent.

The Street is bullish about the stock, which has hit repeated 52-week highs over the past week. Investors have gained 21 per cent return over the past month and 63 per cent over the past year. Despite the jump, investors can make money if they have a longer holding period.