Lauded by the world 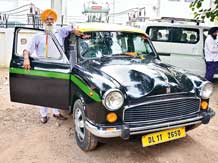 Jagat Singh Lubana has been driving an Ambassador cab since 1969 It hasn't even been a week since Neeraj Kohli joined Hindustan Motors as general manager. "A lot of work is still being done manually here, unlike in other car plants," he says, at the facility in Uttarpara, where the Ambassador - the oldest face of the Indian automobile industry - is being manufactured since 1948.

Kohli, who was earlier posted in Gurgaon with General Motors, is not used to such an aged car plant. So, he is naturally surprised, like everyone else, that the Ambassador has a new status as the best taxi in the world.

The Amby, with its vintage Morris Oxford looks, took on everything thrown at it in a face-off organised by popular auto show Top Gear, aired on BBC. It emerged winner over big names such as the German E-Class Mercedes Benz, Mexican Volkswagen Beetle, Russian stretch limousine and the famous London black cab.

And yet, when you step into the factory at Uttarpara in Kolkata, you would hardly think of it as the birthplace of the world's hardiest people carrier. The number of units sold by the CK Birla company had slid to 3,390 last year, from around 18,000 prior to the entry of the multinationals in 1995.

Yet, the Amby's legend endures - especially on the streets. The taxi segment on average constitutes half of the total Ambassador sales, and Kolkata's yellow cabs account for about 75 per cent of total Ambassador taxis in the country.

"The thickness of the steel sheet used to make the body of the car is the best in the industry. It is the safest car for cab drivers," says Uttam Bose, managing director, Hindustan Motors. The current model of Ambassador taxi was designed in 1976. "Ever since there has been no compromise on the quality front," adds Bose.

Sarbal Kumar Singh, a taxi driver in Kolkata, bears Bose out. "No car can be as hardy as the Ambassador. Almost every little part, including the bumpers or radiator cover, is made of steel. Maintenance cost is very low. You do not have to frequent a service centre - any garage in your locality will come to your help," says Singh.

When asked why the Ambassador is his first choice as taxi, another cab driver, Giriraj, says, "It has space for a lot of luggage. Also it has a long shelf-life if properly maintained. You cannot run a taxi in the city once it is 15 years old. But there is no strict restriction in rural areas. My father sold a 15-year-old ambassador for Rs 60,000 in Medinipur."

A white whiskered Jagat Singh Lubana, who cannot say exactly how old he is, except that he is "80 plus", has been driving taxis in Delhi since 1969. For over four decades, his vehicle has been an Amby. "Even when other cars came into the taxi industry, I kept to the Ambassador," says the old man. Ask him why and he says it because he himself feels safe in it. "Also," he adds, "passengers still tell me that they like the Ambassador more than other taxis, like the Eeco, for its ample space and the feeling of safety it gives."

The story is not all a fairytale though. The ailing Hindustan Motors is now struggling even to meet the demands of the taxi loyalists due to technology constraints. While the BS-IV emission norms have been made mandatory in 13 major Indian cities since April 2010, HM still rolls out BS-III diesel cars and, therefore, has not been able to sell the Ambassador in these cities for three years. The West Bengal government allowed it to sell the BS-III diesel taxis in Kolkata until May this year. It's now a couple of months since that grace period got over. No wonder, the current year has seen a dismal 709 units selling between April and June.

Still, Bose puts up a brave front. "Things will be sorted when we take the BS-IV taxis to the market next month," he says. Hindustan Motors has now received the much-awaited Automotive Research Association of India (ARAI) certification for its newly launched BS-IV diesel engine. Besides, it has an ambitious plan to launch a new-age hatch-back version of the iconic car next year.

The crown of "the best taxi in the world" was no doubt a pleasant surprise for the company. "We came to know of it only after the announcement was made by Top Gear on BBC. Of course, it will be part of our future marketing campaign," says Bose. Already, if you open the Hindustan Motors website, you will be greeted with a banner that gushes about the newly won title.

So, despite all odds, the likes of Neeraj Kohli can take solace in the fact that their company has a product that UK-based motor museum Beaulieu famously describes as "India's virtually indestructible Hindustan Ambassador". It's only a question now of translating that into sales.