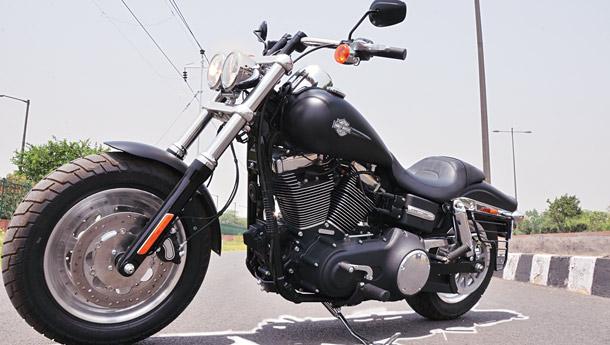 The name Harley-Davidson recalls the iconic image of Arnold Schwarzenegger riding a big burly Fat Boy, a shotgun in one hand in the movie Terminator 2. That was the epitome of cult status for a two wheeler. Sure we all drooled over flashy sports bikes, but when it came to the all-American chrome-domes nothing could define the word 'awesome' in the biking world as a Harley-Davidson did. So news that Harley-Davidson is out with the new Fat Bob is enough to get the adrenaline pumping . Smitten by its elder brother, Fat Boy, launched a couple of years ago, we certainly had a lot of expectations from the latest member of the Dyna family. So, let's sit back and enjoy the motorbike ride.

First impression
True to its DNA, the Fat Bob is imposing and the dual round-chrome headlights ooze attitude and a sneer that seems to be snarling, "What are you looking at?" These twin headlights were a rage 10-15 years ago, but even now they add a touch of classic to the bike. The reason why the machine is called "fat" is because of its hefty front forks. Breaking traditions, Harley-Davidson has changed the laidback, swooping handle bars to the flat, drag-style handlebars that are easier to hold, especially for Indian riders with their shorter reach. The feet-forward couch-like seating posture ensures that you have complete control of this beast without worrying you will fall short of the handlebars. What's a bit disappointing is that the Fat Bob is predominantly a single-seater as the pillion cushion looks, at best, an appearance - it is big enough only to ferry a size-zero model. Not much for us real-world riders there. What makes us smile, however, is the extravagant use of chrome on the forks, engine exhaust and on the massive engine.

Ride'em cowboy
We almost expected the drums to roll as we fired up the engine. Sadly, it wasn't the thundering start we were expecting, rather a more muffled effort trying to break free of the child lock imposed on it. Twist the throttle and the forward inertia pushes you back as in a race car. This makes you realise that this is no ordinary cruiser. So much for a laidback pleasure ride! Even though the response is powerful, it is extremely controlled and does not throw you off balance. You have to understand something. The mechanics between your legs is a 1.6-litre engine (1,585cc) - in more understandable terms, it is equivalent to the power of a powerful sedan. So yes, size does matter and here, with the power available, the Fat Bob does not disappoint. Harley-Davidson does not reveal its engines' horsepower, so their power is measured by torque. This one makes 126 Nm at 3,500 rpm. Again the Fat Bob breaks cruiser myths by providing a bucket load of torque at low speed, ensuring that it is a piece of cake to ride this 325-kg bike within city limits. The six-speed gear box guarantees that the Fat Bob never huffs and puffs for more power while cruising on the highway.

Comfort and handling
Many "experts" had forewarned of the cruiser's heavy-handled tendencies with poor-to-average weight distribution. The Fat Bob laughs at these infidels - this Harley's weight is anything but badly distributed and, therefore, translates into a confident, balanced feel, especially while sweeping the corners. The Fat Bob's manoeuvrability is the surprise package. The ride quality too is on the more comfortable level. Minor bumps and ditches are easily swallowed by the suspensions but when it comes to big potholes it is wise to slow down or simply avoid them. If not, then be prepared for a bone-jarring experience. It also comes with anti-locking brakes system (ABS) as a standard feature.

The Harley's Achilles' Heel is the weak rear brake. It almost has no feel.

Summing it up
The Fat Bob is a showstopper. Believe it or not, a traffic police had to stop a driver for overtaking other vehicles rashly so that he could get a better glimpse of this Harley. We were asked many questions by passersby like "what's the price?" and the inevitable one - "how much mileage does it return?" My irritated looks answered the latter's question. Getting back to the bike, it is a great city-cum-highway cruiser.

If you were expecting it to be a challenge in the handling department and for being the brand ambassador of noise pollution, then the Fat Bob will prove you wrong on all counts. Coming down to brasstacks, the Fat Bob costs Rs 12.81 lakh (ex-showroom, Delhi) and it is worth every lakh for bike lovers with deep pockets.