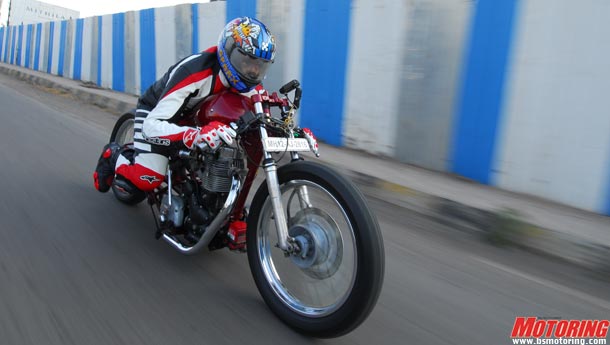 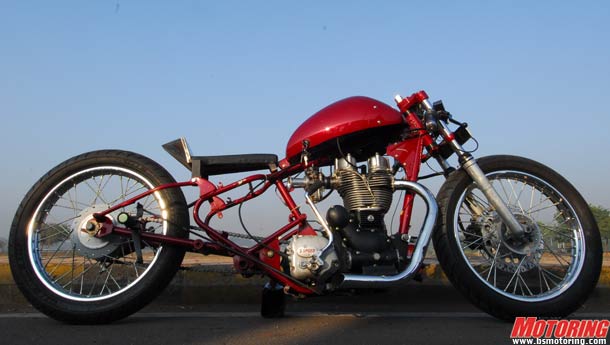 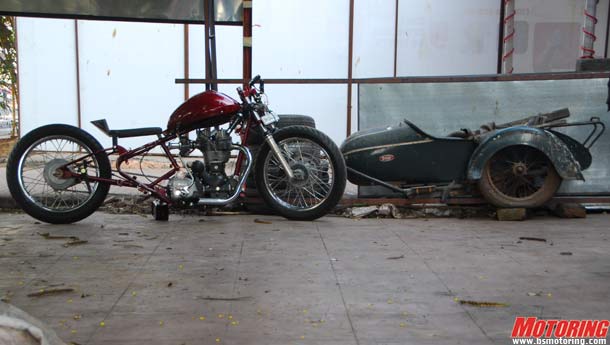 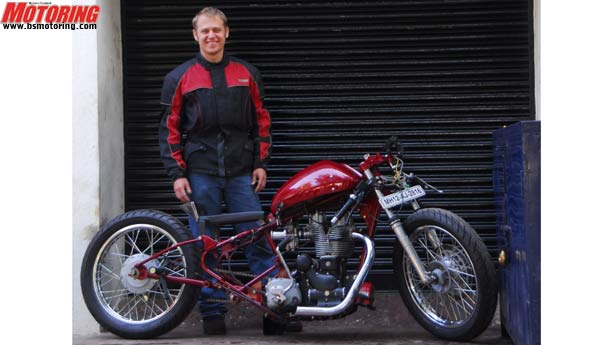 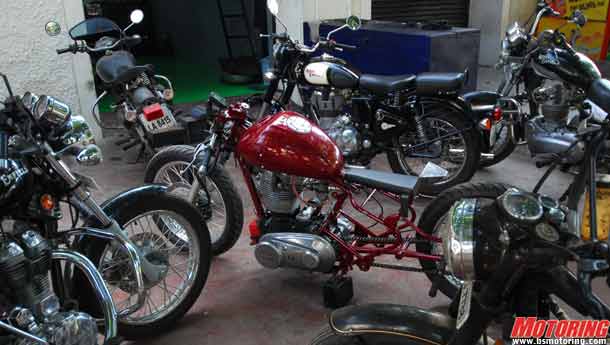 Pain. A sensation that riddles my arms, my feet and pretty much all of me. My eardrums are just short of imploding within my skull and my knees cry out for some relief. Yet, I keep at it, like a masochist out for his daily fix. And beneath all of that torment, hidden behind the helmet is the broadest grin in the recent history of Kyle-kind. At low revs, the push-rod motor splutters and complains like a rabid pitbull on a leash. A very short one at that. Once the revs spin past about 2000 rpm, that leash snaps, unleashing the beast and all the fury pent up within. It lunges forward and I imagine my face going white. The painted lane markers turn into a seamless line, my helmet fogs up, my sense of self preservation is flung into a dark cranny somewhere in my cranium where it ceases to be heard and my right wrist twists back. I’m already clocking a hundred kilometres an hour, with a couple of thousand revs to go before the redline. And it’s only in second gear, with three more cogs in store. Oh Lord, I’m coming home. With a rigid rear end and a rexine encapsulated sheet metal job that functions as a seat, the very concept of ride quality is non-existent. While doing the runs, every ripple on the road sends tingles up my spine and reduces my chances of raising a family by half.

But all of that is a small price to pay for the manic rush that this machine provides. The tarmac skims a few inches below my knees, threatening to grate them like Swiss cheese if I try something stupid. The loud blat of the unsilenced exhaust pipe ricochets off the median and it keeps growing louder and louder till it drowns even the Sukhoi Su 30 that’s taking off from the nearby Lohegaon air force base.

I don’t know what kind of mushrooms go into his omelette every morning, but this lad from Pune is the mad hatter behind the ‘Monster Dog’, an Enfield Bullet 500 that lost its bearings a long time ago. What started out for Kunal as
a mere craving for speed on a marque that isn’t commonly associated with sheer performance, soon turned into an obsession of earning an inscription of his name on the salt. The hallowed salt of the Bonneville flats, no less.

The extent of this fixation is easy to notice. The riding posture on the Monster Dog is akin to a certain missionary’s position; great for everything else, just not for motorcycles. My legs are extended almost all the way back, while my arms stretch out forward to hang on to the bars for dear life. Comfort? What the hell is that? This motorcycle is purpose built with a one-track mind, a burning fervour to go down a straight faster than what the best can even think possible. Everything else is frivolous.


What is most remarkable is how close to bone-stock this motorcycle actually is. And let me start bottom up. The crank, lightened and balanced, spins in an untouched crankcase, and that too on the floating bushes that Royal Enfield had shod it with. The block, identical in dimensions and appearance to the original 500cc article, is now cast in aluminium instead of cast iron, but the bore diameter remains the same. If you actually paid attention in your metallurgy class, you’ll recall that aluminium dissipates heat better than cast iron while being lighter too – just the thing for a motorcycle of this nature.  What is also untouched is the stroke length that is retained at 90 mm.

A dome-crowned piston takes the brunt of the explosions brought about by the simultaneously firing twin plugs, causing the compression ratio to be bumped up to 10:1. The two spark plugs, run on total loss electrics to further shave off weight, fire in unison to provide better flame propagation in the combustion chamber – in simple terms, it helps the air-fuel mixture burn faster and more efficiently.

Moving upwards, the cylinder head is ported and polished but otherwise not much different from what was manufactured by the company. However, the valvetrain components have been lightened to help the motor rev better and the valves are operated using higher lifting cams, while the timing of their operation has been altered as well.

To retain the quirkiness of the older Bullets, the five-speed gearbox has been modified to be worked from the right side and now sports a one-up and four-down shift pattern. Gearing is now taller than the original, providing a theoretical top whack of over 200 kph. Since I’m talking about the gearbox here, I must mention that the cogs slip into place like butter. Every time I summoned neutral or a gear, it was there, like an obedient canine over-anxious to please his master.

But a motorcycle is a sum of its parts and those include much more than an engine. The frame once belonged to a humble Bullet Standard, but is now stretched about 10 inches to increase the wheelbase. To keep the centre of gravity down, essential for high speed stability, the frame has been lowered substantially and Kunal intends to get it to sink to newer lows soon. Steering rake angle as of now stands at 27 degrees, but will be increased to 39 degrees to reduce the possibility of a high-speed tank slapper – no matter what you land on when you’re clocking 200 kph, be it mud or sand, it can’t be a pleasant and fun-filled experience, I reckon. Tyres are 240 kph-rated 100x90 Avons that ride on 19-inch steel rims, which will be replaced by alloys in the near future.

As I dissect this motorcycle, it’s harder and harder to believe that it was built by an individual with a handful of tools and not by an overfunded team of so-called experts. Sure, he happens to run an authorised Royal Enfield workshop, but then again, there are many who do. It has taken three years for Monster Dog to get this far and this is only the beginning. The end will be decided on the salt flats of Bonneville, when the Bullet is pitted against the most unwavering of adversaries – time.

Dogged determination, plenty of ingenuity, sheer hard work and sound fundamentals are some of the reasons for this motorcycle’s state of tune. Great job done, Kunal and we wish you the very best. Godspeed, then!

Kunal runs a Royal Enfield authorised service centre called Kunal Bike Works in Viman Nagar, Pune. A thoroughbred motorcycle enthusiast, he tours at the drop of a helmet and when he’s not riding, he’s wrenching on Monster Dog, squeezing out every last ounce of speed from the machine. He plans to enter Monster Dog in the vintage 500cc non-streamlined class at Bonneville. As of now, the bike is naturally aspirated. But if dabbling with a supercharger works as well as Kunal hopes, the bike will be run in the forced induction sub-category. Building the bike and honing it is half the battle won. He needs to get the motorcycle and his crew, including himself, to the US and that is going to be very, very expensive indeed. Kunal would highly appreciate it if sponsors could help him realise his dream of victoriously entering India in the record books. You can contact Kunal on +919881341144 or log on to www.kunalbikeworks.com for more details on the Monster Dog project.