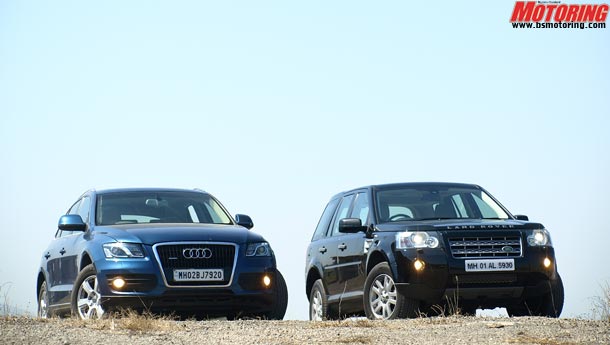 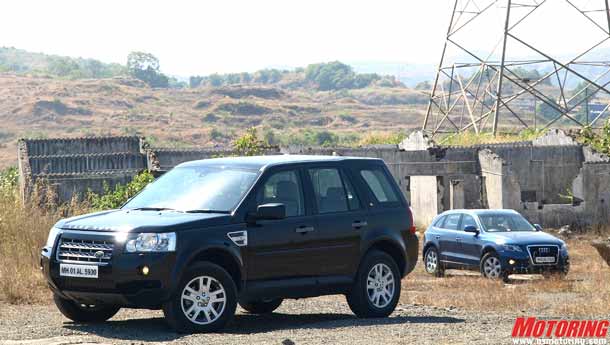 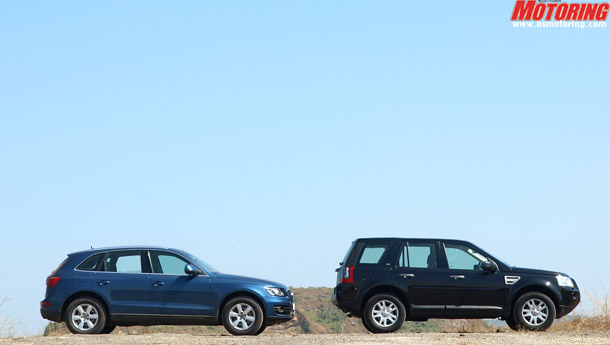 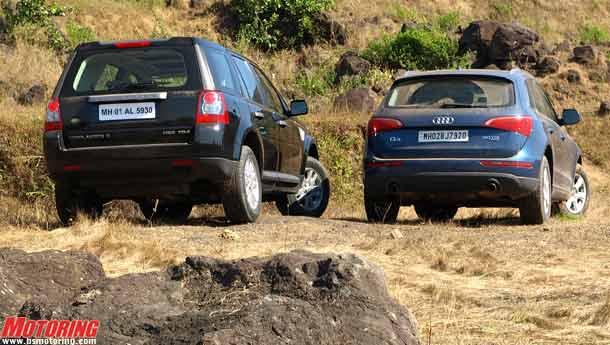 I have been torn between German engineering and British flair for some time now. I love rock-solid Mercedes-Benzes from the eighties and nineties, but all it takes is a grainy picture of an MG convertible for me to go weak in the knees. BMW motorcycles may outlast the Rock of Gibraltar, but there are few things that can beat the thump of a British twin or even a single on a cold Sunday morning. You get the picture – it is about strong virtues versus romantic overtones. Or clinical efficiency versus paranormal automotive intuitiveness. Whatever you make out of that last one, let us get on with the comparison test before I take this nationality thing too far.

One look at the Audi Q5 and you know it has got a burlier big brother called the Q7 – on quiet nights, I am certain of this, it even whispers a ‘Don’t mess with me’ to dogs that attempt to do what they generally do. The Freelander 2 too brandishes family genes with a certain degree of effortlessness. That means whether we like the looks of the Q5 or the Freelander 2 depends a great deal on what effect the Q7 and the Range Rover/Sport have on us. As for me, the answer is clear – the Q7 looks the part because it was supposed to be, and is, big. The Q5 is small and the butch-nose treatment does not work as well despite the LED garnishing. It looks suave and even makes the Freelander look prehistoric. Alas, in this case,  prehistoric also looks smart and purposeful and we like a sense of genuine usability going into design, especially when we are dealing with SUVs. Despite identical tyre sizes, the Freelander 2 has a taller stance than the Q5. Narrow shutlines and flawless finishes are good for passenger cars but after an outing in the bush, it will be the Freelander that cleans up quickly.

The squared-out innards of the Freelander can be considered traditional when compared to the plastic-bending wizardry of the Q5. But there is something basic yet sprayed with luxury that makes the Land Rover interior look richer. On the other hand, the Q5 interior has acres of grey (good, textured grey, still). While the twin-tone finishing with wood inserts could have come only from England, the Audi reeks of mass-produced functionality that has made Ingolstadt famous. While general ergonomics are good in both cars, the large rear-view mirror obstructs peripheral vision in a big way. The more SUV-like, tall driving position of the Freelander2 makes you immediately comfortable behind the wheel. If you are going to buy one of these cars to enjoy the rear seat (oh no!) then it had better be the Audi – at least you get more legroom. The green back-lit info-displays of the Landie are no match to the MMI powered orange-and-white display of the Audi. One feature that old timers will fall in love with is the horn-bars of the Land Rover that are oh-so intuitive. It’s a brilliant feature, especially for Indian driving conditions, where you don’t want to be searching for a horn hidden inside the steering boss.

Who wants to develop an all-new engine for a new SUV when you have a class leading V6 that pumps out 240 bhp and 51 kgm of turning force while sipping diesel? Well, Audi just ‘borrowed’ this power unit from the Q7 to power the Q5. The results, obviously, are stunning acceleration and overall speed that is in the luxo-sport sedan league rather than in the SUV club. All that power and torque is managed using a seven-speed DSG gearbox. On road or off it, the Q5 does not run out of breath. That said, there is a minor matter of turbo-boost building up on time and this affects driveability in choc-a-bloc traffic more than anything else.

The much smaller four-pot diesel of the Landie is good for 158 bhp, 82 bhp short when compared to the Q5. Surprisingly, the smaller engine provides better city driving ability, with more linear (eager is a better word) power delivery. Similarly, on the off-road course, the Freelander never felt lacking in torque (40.1 kgm). The six-speed gearbox lays down power quickly enough to stop the clock at 11.2 seconds for a 100 kph run. The Audi, on its part, demolished that mark with a scintillating 7.5 second dash to the three-digit mark.

Both cars can cruise on the highway with the respective engines ticking away leisurely, but it is the bigger-engined Audi you want to tackle that day-long highway haul with. The Landie returned a decent enough 10.1 kpl (combined cycle) while the Q5 was sipping fuel at 8 kpl – maybe we got a bit carried away with that engine! This comparison is a classic case where  ‘small’ means adequate and ‘more’ means merrier. And who in their right frame of mind is going to argue with ‘more’?

No contest here – the Q5, despite its Quattro powertrain and muscular engine, is far too civilised for the jungle. Or the slush or desert. It is a pavement crusher and the MMI will display ‘Uh-oh!’ in bold if you try to cross a river bed in one. We did put it through the paces and the car came through without many problems, but it never felt comfortable doing the stuff. On the other hand, the Freelander feels at home in off-road conditions. It is as if it was meant to do this (the monocoque body structure notwithstanding) and was taught the art by an ageing father who answers to the name Range Rover. This is a baby Range Rover, and it was a revelation on our off-road track. The idiot-proof Terrain Response Knob allows you to use the all-wheel drive system to the maximum. Can’t wait till the next slush fest!

The rational choice is the cheaper Freelander (by almost Rs 9 lakh) that offers more exclusivity, better economy (if you really care) and better comfort on bad/no road conditions. The Audi Q5 exudes contemporariness in a massive way. Not for nothing does it look like a smaller Q7. And since 98 per cent of owners are going to drive it to the club 98 per cent of the time, with perhaps an occasional hill station drive thrown in, the Q5’s V6 diesel seems a bit unnecessary. When you buy a car in this league, you need to think of service support too and Audi is slightly better off on this front as we speak. Enough to justify that Rs 9 lakh premium, we guess. So the English win the heart and the Germans walk away with the cheque – sounds familiar?