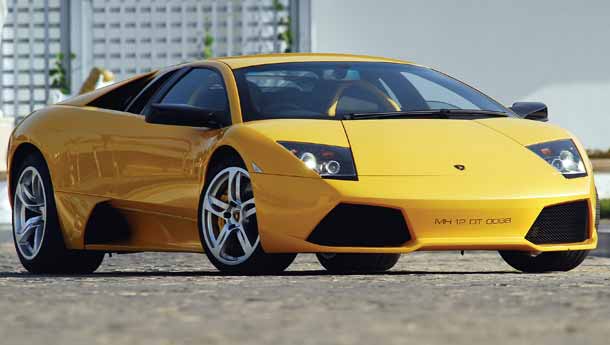 Long version
I have driven a twelve cylinder Lamborghini. Now, I am already feeling better. The gravity of the issue is so severe that I spent a night chocked on a headline. There were moments when I thought of carrying the whole story in the form of pictures and captions – because I really thought I wouldn’t have enough words to do justice to what is arguably the most important car to BSM in this whole universe. Goodness gracious, we are on the holy grail of supercars and writing about it feels even more dangerous than driving one. Oh god, forgive my errors and book me a bed and breakfast in hell. Because I have sinned.

Yes. Merely looking at something so achingly beautiful is not dissimilar to a much married man ogling at an exceptionally beautiful and well formed girl. Imagine caressing her, coaxing her to come with you and going all the way and you know that your chances of meeting mother Theresa in your afterlife is pretty remote.

Last time I wrote a story on the Lamborghini, the Gallardo, a reader wrote back saying that half the art is restraining oneself…or something like that. If that particular reader is reading this I have a piece of polite advice – go jump from an aero plane. Because, calling what follows mere automotive journalism is certain to attract the attention of Satan himself.  Call it a blood curdling account of driving a dream supercar and you may start growing horns. You decide.

Seeing the Lamborghini Murciélago LP 640 in flesh for the first time, I am sure, stopped my heart for a nano second. There she was, in the porch of a magnificent mansion, sitting low, edgy and sharp. Very sharp. I couldn’t blink, let alone act normal. Parked behind it was a full blooded Mercedes-Benz SL which paled in comparison. Sorry Stuttgart. As a Lamborghini fanatic I may still consider the Miura more gorgeous, Countach more pure and the Diablo more devilish. But the Murciélago certainly is the fiercest supercar to come out of Sant Agatha whether it be looks or performance we are talking about.
Audi ownership has been a good thing for Lamborghini and the Murciélago is absolutely well put together. If god is in the details, you can see his reflection in carbon-fibre, plastic and even the plexi-glass louvers that lets you gape at the massive 12 cylinder motor. And what a sight, that engine is! Gioto Bizzarini, who built the original Lamborghini V12 would have approved.

The 6496 cc V12, as its name suggests, produces 640 bhp at 8000 rpm and 66 kgm of torque at 6000 rpm. Figures that numb the key board as you type it in. Almost double the power and torque compared to Bizzarini’s gem of a V12. Today a sophisticated engine management system and state of the art fuel injection has replaced the iffy electricals and flurry of Weber carburetors. But the basic architecture of the motor that powered the 12 cylinder Lamborghinis remain. When it was launched, the Lamborghinis had to fight 300 bhp Ferraris, today the Murciélago need to take the game closer to the Bugatti Veyron. With its top speed of more than 330 kph, the LP 640 does not challenge the Veyron much, but it certainly is the fastest series production car today if you discount the ultra small volume cars like the Koenigesseg CCX and the Pagani Zonda. Obviously tyre technology need to be at its best to accommodate such quantities of power and torque and the very fat Pirelli P Zero, Series Rosso tyres that fill up the wheel arches do just that. These monstrous tyres should be giving the shudders to gravel driveways around the world.

The doors open heavenwards using a simple strut device. But by doing that it differentiates a super Lamborghini from the rest of the world. The site of a Murciélago parked with its doors facing the sky is something that etches ‘exotic’ in bold in your mind. Getting inside the car is an aerobic activity and can be done graciously only if you are trim and 24 years of age. For me it was a tough act indeed – I would sit in the wide sill, then throw a leg inside, slide my back into sculpted leather seat, use both arms to lift the other leg into place before some eager fellow slammed that scissor door down and execute an unplanned amputation job, is how it went. The doors can be pulled-down-shut easily once you are inside the machine.

The real sense of occasion dawns on you when you fire up the engine. And you really fire up the engine. Thanks to modern sound deadening materials and metallurgy, the idle, after an explosive b beginning, is somewhat subdued but it is still an earful and the tremor could be seen on windowpanes nearby. The LP comes with a manual six speed gearbox or an auto e-gear as Lamborghini calls it. Our car, thankfully, had the e-gear system and that meant the handful of km that we could drive it could be spent more fruitfully than learning to shift through the famed metal shift-gate. With a power to weight ratio of close to 385 bhp per tonne, the Murciélago is quick to let you know what she is capable of. You really need two hands on the wheels as the tacho flies to 8000 rpm and send you rocketing to 100 kph in 3.4 seconds flat.

Unfortunately we couldn’t take this beauty to the Mumbai-Pune expressway (thanks to terrible approach roads) but we did experience the brutal acceleration to 200 kph more to our hearts content. The engine noise changes tone at the touch of 5000 rpm and the world rushes in towards the windscreen of the car. Alright, that could be true for any special car in this ‘speed’ issue, so let me rephrase it again. ‘Your eyes open wide to accommodate rushing scenery and they seem to focus only on the bit of tarmac in front of you’, is more like it. Again at around the 5000 rpm mark you are slammed back to the seat and wondering when your right leg is going to come off the accelerator and there by ensure that you live for many more years.

Sheer, spine-chilling, divorce inducing acceleration is one thing, but the fact remains that this Lamborghini can be driven fast even on tight roads, with practically no run-offs, as long as you have had your share or powerful cars. If you are not, then you may lift-off mid corner doing 160 kph and face traffic that you had just passed.  Sure the rack and pinion steering judders its way through but the feedback is supreme and lets you have a tight leash on the car. Which this car demands. The e-gear shifts are snappy unless you want to down shift without caring for revs – something that will send valves to the orbit of Saturn. The double-wishbone suspension all round is designed for handling than ride but I was very surprised by the quality of ride on offer on slightly broken tarmac.

A bit of comparison is inevitable here I suppose. Honestly, there is precious little that the Murciélago LP 640 can do better than what the smaller, slower, Gallardo is capable of. Sure it has those magic doors and lots more power on paper. But the Gallardo feels much more modern and sure-footed when you go through the motions. Compared to say, the Porsche 911 Turbo, the mother Lambo is much more charismatic – whether it is noise, performance or its ability to lick speeds above 330 kph. If sensory pleasures and a touch of fairy tale is what you want with your supercar then the Murciélago delivers big time – but if quality track time is what you are after then Porsche fits the bill better. It is indeed sacrilege to compare these cars to the descendent of a Miura here, still.I was getting familiar with the car and the speeds were on the up when my time with the super coupe was over. I came around the corner one last time, set my sight on the horizon and mashed the throttle one last time. The Lamborghini barked its way to another insane run trailing a dust screen in its wake. And then it was time to shut the powerhouse down. Seriously, when the mighty 12 is silenced you half expect the electric lines to trip send the town into darkness. As Pablo trained his Nikon on the now ticking Murciélago , Rohin nudged me and reminded me of the future of the big Lamborghini V12.

Stringent emission norms that loom over Europe may force Audi to use their W12 engines on future Lamborghini Supercars. That will mean the end of a 43 year old run to the brilliant motor that powered the imagination of more than one generation. LJK Setright, the legendary scribe even accused that the Lamborghini V12 was created by Honda and not Bizzarini. Bob Wallace, the man who was responsible for hiring Ingeniere Bizzarini had this to say, ‘ To think anything else about that engine’s origin is crap. Probably that is something someone did to sell a magazine’. Harsh words towards LJK, considering the fact that it was the bearded pen pusher who gave the world the word ‘supercar’ when he wrote first  about the Miura.

Whatever it is, I am glad that I have had a fling, a brief one, with the mother of all V12s before emission  norms killed it. It is another thing that I choke and run out of words every time I have to write on a Lamborghini.