Lamborghini Huracan has been criticized globally for breaking the traditional convention of the Italian automaker, by being too subtle in context of its design philosophy. Now the “raging bull” brand can take stand against the criticism with the help of Vorsteiner, which has unveiled its Novara Aero program for the Lamborghini Huracan. Vorsteiner is a carbon-based aerodynamics and luxury wheel manufacturing and tuning company which specializes in Elite luxury vehicles with a focus on European manufacturers that include the likes of McLaren, BMW, Ferrari, Bentley and many others. The company is based out of California and has concocted this masterpiece which will be showcased at the ongoing 2015 SEMA Motor Show that is being held in Las Vegas, Nevada. But it's not all fashion and no logic! The car features a plethora of components that enhances its aerodynamic characteristics, in addition to bestowing the car with aggressive styling, which helps it steal the spotlight. The aerodynamic updates include a carbon fibre front splitter, carbon fibre ventilated front fenders, carbon fibre side skirts, a diffuser and a rear wing with aerospace-grade aluminium uprights, in addition to a stainless steel exhaust system at the back. The car treads on company’s new V-FF 105 flow forged wheels, wrapped in Pirelli P Zero tyres which will also be showcased at the same 2015 SEMA. The standard Lamborghini Huracan costs around Rs 3.43 crore (ex-showroom, New Delhi) 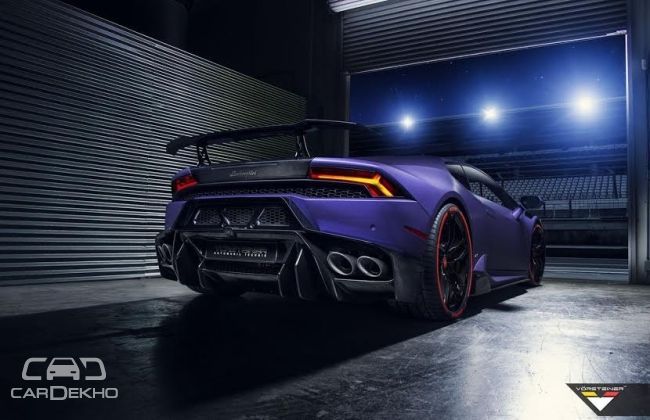