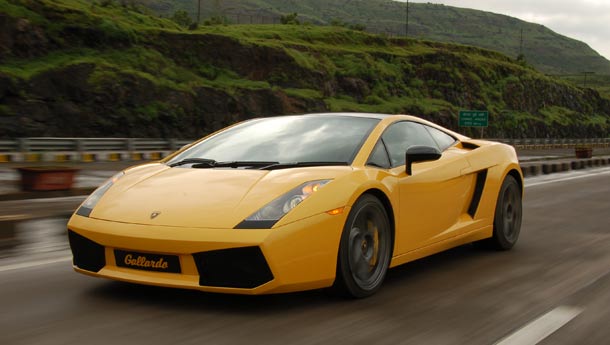 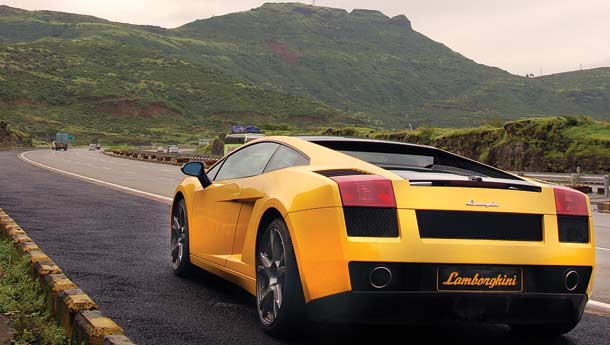 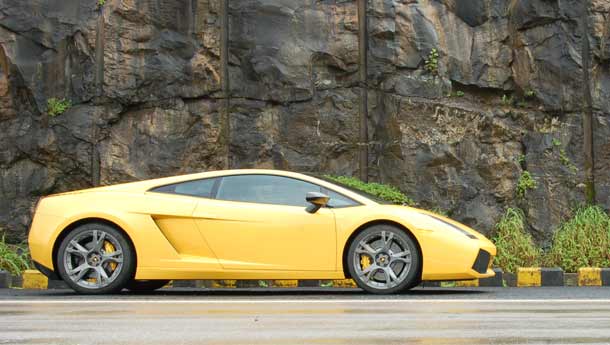 There are two things that have happened in my life that have given me immense satisfaction, though they took place after a prolonged wait. I can’t tell you about the first one, but the second deed, well, I have decided to write a whole story on it. Yes, I have driven a Lamborghini. If it sounds like I have lost my virginity, then trust me, it is the case. Oh, stupid me!

Every one of you who is reading this copy should know how much I yearned to drive a Lamborghini and for how long I have waited for it to happen. If you are a Ferrari fanatic and don’t like the ramblings of an adult male, then stop reading right now. To begin with, pictures of Lamborghini motor cars made me an automobile addict. The romantic history of underdog Ferrucio taking on Enzo himself made me follow cars. I got myself the first proper Lamborghini poster way back in 1987 – that of a Countach – and it still adorns the drawing room of my home. The first ever piece that I wrote was on the 25th anniversary Countach and it got published in Malayala Manorama. And the cheque of Rs 35 that I received was the first time someone paid me for anything and made me believe that I should quit law and take up motoring journalism. The first time I saw a Lamborghini, a Diablo in Paris, I leapt so high to take a second look that my camera fell down and broke. I have sat in every Lamborghini that I have seen at every auto show ever since. I have given Lamborghini nicknames to every one of BSM’s staffers. I have named my daughter Miura, after the most beautiful automobile ever built. And did I tell you that I love everything and anything to do with Lamborghini?

I have driven lots of cars and even some ferocious Ferraris, the latest one being the 360 Modena, but allow me not to corrupt the following road test by bringing comparisons into place. Let me get this off my chest straight away – driving a Ferrari fast was a seriously emotional experience too, but to me, driving a Lamborghini fast is enough is to leave me in a void. Trust me, I am desperate for a new goal in life. Alright, 385 words is enough for a prologue.

To cut a long story short, it was not Automobili Lamborghini who helped me live my dream. A big thanks to BSM’s friend Yohan Poonawala who let us loose in his prized bull – the 230th of only 250 Gallardo SEs ever produced.

Our appointment with the Gallardo was on the Pune end of the Mumbai-Pune Expressway and I drove the entire length of it with my fingers crossed. My luck with supercars is not very good and I could think of a thousand reasons why the Gallardo would not turn up for the date with me. But she was there. A bright yellow sculpture gleaming in the shafts of the sun’s rays.

No amount of pictures, not even by the greatest of photographers, can convey the real beauty that the baby Lamborghini is. What looks like a simple, bright wedge on wheels in pics transforms into an exceptionally well detailed supercar with fit and finish that could make God himself envious. The new owners of the famed yet historically flawed Sant’Agata marque have done a superior job of giving birth to a modern day thoroughbred, without losing its genetic threads. And it is sharp. Bleeding edge sharp. There is not a single line that may arouse the feeling that the designers were a confused lot. Never ever have sharp lines and curves blended oh-so-well into one automobile since the Countach. Sure, it has a bit of modern Ferraris in its greenhouse treatment, especially the F430, but the rest of the car is inimitably Lamborghini – a genuine understudy to the mighty Murcielago that happens to be prettier.

The effect the low slung Lambo has on people? Well, cops stopped to gape, toll agents dropped coins and one young lad left his Santro, with his entire family in it, and started taking pictures with his camera phone. The Santro kept on rolling till someone sensible found its handbrake lever! Few cars can do this to anyone, right?   The sense of occasion is not what you expect on the inside though. The SE version that we were testing had a sprinkling of yellow inside to remind you that this is something special. Audi has dipped generously into its parts bin to source a great deal of what you see inside the Gallardo and I especially disliked the centre screen that could have been straight out of an A6. Nothing wrong with that as long as it functions well (here it becomes the reverse camera aid), but perhaps some software engineers could have been hired to at least change the fonts on the screen.

You sit very low and very far back from the windscreen in the Gallardo, with almost nothing separating you from the massive V10 that lies behind you. And that driving position makes it very special. A thumb starter would have been nice, but instead you wake the beast up with a conventional key. An Audi key with a bull on it.I did utter a prayer – partly thanking God and partly in fear – and turned the key to summon 500 horses. And then blipped the throttle to send an electric pulse to the last strand of hair in my body. I have heard some very loud cars in my life but nothing as delicious as this one. This, I told myself, was going to be one special drive.

I eased out onto the Expressway with the car in automatic mode (I could always experiment with the e-gear take-offs later) and soon regretted ruining my driving shoes in the recent slushfest. Even my sporty suede pair was way too big for the pedal formation and I ran the risk of slamming the accelerator instead of the brakes, which, I presumed, wouldn’t be very funny in a supercar.

The commotion of the V10 as you accelerate out is not dissimilar to a very fast moving steam engine in rivet-popping mode – speeded up and amplified twice over. And when you sink the throttle, it is as if someone dumped a truckload of coal into its raging furnace and poured kerosene over it for good measure. The car collects its breath, I mean revs, and unleashes a brutal stab of raw power that can send quivers through the transmission tunnel as well as the seat of your pants. Soon you are driving a serial explosive device, not a mere car. And inside a tunnel, it is more intoxicating than nuclear waste injected directly to your veins.

The beauty of the Gallardo is that it was designed from a clean sheet and that means state-of-the-art powertrain refinements like permanent four wheel drive with a viscous traction system that gives a 30:70 front/rear power allocation normally. That means you can floor the sin-pedal without losing the rear or the front end, since any slip at any end is sensed and power allocated to the other. Essentially all the traction you need without too much electronic interference.This Lamborghini has single minded dedication when it comes to accelerating to 100 kph in 4.2 seconds or a kilometre in just 22.3 seconds. The only thing that can stop it from running all the way up to the 310 kph mark was one stunned me sitting behind the wheel. I did a couple of standstill to 220-230 kph runs and marvelled at the fact that the throttle pedal had lots of room to travel. But what was impressive was the way the speedo needle stayed above 150 kph almost all the time.   Engine maniacs amongst you will be orgasmic when you hear that the all-aluminium lump can pump out 500 bhp (512 for the new version) at 7800 rpm and 51 kgm of torque at just 4500 rpm. This 5000cc dry sump unit is a 90 degree V10 with variable inlet and exhaust and valve timing. The variable geometry fuel feed is gobbled by an ignition system made up of individual coils directly mounted on each spark plug. All the action is governed by the Lamborghini LIE electronic management system, which ensures that its power and torque curves are supercar textbook material. At 3000 rpm, the Gallardo is pumping out 190 bhp, at 4000 it is 290, at 5000 it is close to 350, at 6000 it is above the 430 mark  and at 7000, you are seeing the Father, Son and the Holy Ghost all huddled in a meeting to decide your fate.

This car can terrorise you and then some. But not by running wide around a corner or by inducing the kind of fishtail oversteer antics that supercars, generally speaking, are supposed to do. Instead, the Gallardo accelerates as if it is an inter-galactic missile piloted by Flash Gordon himself. And it roars while at it. Seriously, you half expect a sonic boom every time one passes you at speed.

As the Expressway started to weave a bit, I decided to let go the comfort setting and pressed the sport button. The car immediately felt tauter (even more so) as dampers and springs got into stiff mode and the massive Pirellis let me know the most minute of flaws in the concrete beneath them. The steering is connected to your brain cells and is absolutely sharp when it comes to turn-ins. By now I had mastered the e-gear somewhat and I could burst out of corners with a wallop of torque to gun the car to the next horizon. Sure I played a bit of Need for Speed in real life (remember the Cala in NFS II?) and straightened most corners that came along and dreamt of the day I could drive one at full tilt on a race track. I have driven many cars with the so-called paddle-shift, and I think even Michael Schumacher would like to own a Gallardo with e-gear using the money he earned driving Ferraris on numerous Sunday afternoons.It is that good. The Gallardo is everything that a supercar enthusiast ever wanted. Stunning to look at, an enormously powerful engine mounted behind the driver, aluminium spaceframe, double wishbone suspension, gorgeous sound and a magical nameplate. Ferrucio Lamborghini would certainly approve.

And then it rained. I really didn’t tell the owner of the car that I lost it while I was attempting another zero to ecstasy run in the pouring rain. But I ended up doing just that. The car didn’t mind it either – it just kept on amazing me with its ability to do scintillating speeds till I parked it. There I sat, sitting in the rain and watching the Lamborghini cooling its innards after a thorough workout. And she looked perfect to the last raindrop that hung precariously from its chiselled snout. What a day.