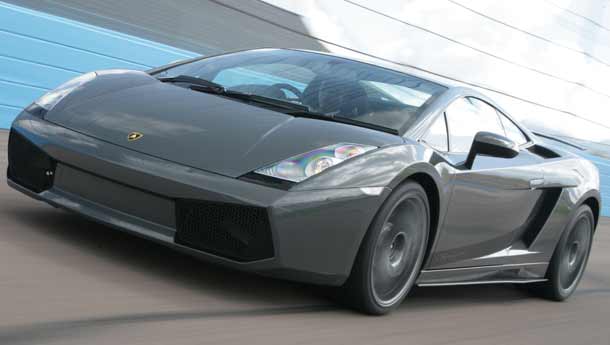 The Phoenix International Raceway is a short little track. Compared to the F1-scale tracks I’ve seen (Bahrain, Autopolis, Catalunya), this thing would fit in one of their parking lots. Seriously. Oval, in-field, pits and all. Which would obviously be a worry at a supercar launch, right? Would you get any feel for the car in such a short space? But, the first time I felt the front and rear ends of the Lambo let go together, I knew the answer. Now, don’t get the impression the four-wheel drift was a result of something I did (or didn’t do). It was a combination of the superb sweep from turn two to turn four, the alarmingly good turn-anyone-into-a-hero Sport mode and a very willing Lamborghini. I was just the monkey at the wheel at the time. Lucky monkey, eh?

We finally pushed the pedal to the metal at the track. The previous miles were sedate interstate ones, spent getting from our super-posh hotel (it was a Lamborghini launch, after all) to the racetrack without attracting any cops or tickets. Which worked out just fine. The only attention we (Jeremy Hart, who writes for Trump and TopGear among others, was in the car with me) got was from an unending procession of men and women clocking our understated oh-so-subtle grey Lambo, rolling gruffly along in the HOV lane (for cars with two or more occupants) and deciding to comment, leave their phone numbers and wave encouragingly. Which was all fine, until Jeremy started waving his cellphone back at the ladies, erm...

At the track, all the cars idling up to temperature sounded absolutely gorgeous. Record this, sell the track on iTunes, make a fortune and buy a Lamborghini... that kind of gorgeous. The lightweight exhaust rasps like an angry bull in the pen. Relatively quiet at idle, the volume levels crank up sharply within a couple thousand revs. At full chat, the force of the sound will make you take a step backwards and yet, the sound is so sweet, you could use falling in love with it as a shift light.As soon as the temp needles rose to the requisite levels, we were let back into the cars. I had the good sense to ask around and here’s what I found out – there is no dignified way to enter a supersportscar. None. You fall in and fold up. Try it any other way and you’ll ending up flashing the crowds (think Paris Hilton), hitting your head on the roof or falling right out of the car. Or, if you’re particularly good at this, all three. And don’t even ask about the best way to back into a tight parking spot.For the track stint, the optional four-point harnesses were tightened down properly, the seat adjustments made more keenly and the preemptive stabs at the throttle pedal went in deeper. It sounded raucous, angry, loud and, yes, cliched as it is, orgasmic.

The lap itself was quite short, with two nearly straight-through chicanes, a section of the banked oval, one reducing radius turn, made tighter with cones, and that delicious little sequence between turns two and four. But in a car as spectacular as the Gallardo Superleggera, even rumbling down to the grocery store is an occasion. The lap certainly was. With the ESP on, the car’s a doddle to drive. And it returns, in addition to a superb spread of feedback, all the cheat codes you need to unlock the adrenaline glands.Every prod at the loud pedal is rewarded with a storming, epic lunge forward. This lunge has the ethereal quality of a continental drift – profound and unstoppable. But unlike continental drift, this is tangible and immediate. You get squashed firmly into the carbon-fibre seat, all the exaggerated bolstering works and there is no let up. I didn’t check, but a faint weave pattern etched into everybody’s behind would not have come as a surprise.

The 4961cc V10 is tuned to deliver 10 more bhp (than the regular Gallardo) on top, but there hasn’t been any change in the torque curve. Which means there’s 51 kgm of torque. And you can almost reach out and touch it. Under that polycarbonate and carbon-fibre boot lies a lump of high-tech metal that’ll set your teeth on edge with performance and your hair standing in applause. I don’t know whether a regular Gallardo is this rich a sensory experience, but for the first time in any car, I actually felt the four fat contact patches hooking deeply into the tarmac. You can feel the springy nature of the tread rubber as it disintegrates under the onslaught. And if it weren’t for the ESP (‘Please do not switcha the ESP off!’), there’d be a faint smell of burning rubber ever present too.

As it was, the ESP kept me on the track. The traction control warning light blinked away furiously for most of the lap. I saw it flash on the straights, on the banking, on corner exits, hell I think I saw it blink in sheer disbelief after I finally parked the car. Basically, you cannot wrong-foot this car. That would take monumental skill or epic stupidity, and I don’t have the aptitude for either (thank god).Once I learnt to trust the ESP implicitly and play with the controls with untempered abandon, I realised another more spiritual side of the car. Driving the Lambo in anger (with ESP as your safety net) is not unlike meditation. It focusses your thoughts, hones your concentration to a fine point and it sets you free. It leaves you marvelling at the way it spears ahead to exactly the point you aim it at. You wonder in amazement at how each corner can be taken faster and faster and faster without as much as a twitch from the super stable chassis. Get it right, and it flows. Between the marvellous, throaty and hugely powerful engine, the superb, unflappable chassis package and the delightful ESP system, you can just boom along at seriously elevated pace, loading up the four-point harnesses under braking, ticking off apexes precisely lap after lap and using the massive drive to exit with authority. Part of the secret of the unruffled poise of the Lambo is, of course, four-wheel drive. One that aims to keep the show on the road, rather than behave well off it. Eventually, I think, I’d even be ready to switch off the ESP and try it no-holds barred. And if I could get that sorted, I’d probably be a demi-god in my own eyes. As Nick Hall and his bunch of mad Brits pointed out, the Lambo won’t misbehave no matter how hard you try. Drive harder and the drama is purely in the renewed fury of the engine note, harder blips on the downshifts and the perfect ‘O’ of your mouth as you marvel at it.

But before I get totally swept away by my admiration for the car – which is no bad thing – let me just tell you what the Superleggera is. The word itself means light, in Italian and that’s what this is. The SuperL is 100 kg lighter than the regular Gallardo and its V10 is tuned to give the lucky owners an extra top-end power to play with as well. And while all of this perfo-romancing was going on, the SuperL was made Euro 4 and LEV II compliant as well. Losing 100 kg may sound easy, but this isn’t a as-seen-on-TV deal at all. You have to remember that the regular Gallardo is not a car you could accuse of having excess fat in the first place. Loads of carbon-fibre and polycarbonate (instead of glass) was involved. To cut a complex deal short, 47 per cent of the weight loss came from interior changes (which explains the uninterrupted sweeps of carbon fibre that abound). 17 and 12 per cent respectively came from the powertrain and the engine.

I mainly drove the right-hand drive e-gear (the standard transmission) car, with a very short stint in the manual transmission (slick, precise, short throws) car, which is the optional gearbox. With my limited driving abilities, I obviously preferred the ease of the e-gear, although I must admit that I’d definitely wanted to go back and drive the manual some more.

And since we’re talking options, the Lambo’s list runs like this. On the list is a CD-changer (which seriously compromises the already very compromised luggage capacity), navigation system, tall spoiler (like the one on my grey beauty), carbon-ceramic brakes, rear camera (with tall spoiler only). A custom fire extinguisher and tyre repair kit are also optional. Among the standard equipment is the jaw-dropping, part-exuberance, part-alien styling, superb finish levels and a macho, hairy-chested feel that Ferraris will never attain. There’s something of the self-made man vibe in every Lambo that I, for one, don’t think the chaps from Modena will ever get.

Driving the Lamborghini about, I could only spot one flaw, and that’s because it was obvious. The e-gear system does not like full-rev shifts. Lift off as you downshift or upshift and all is swell. The Lambo will shift neatly, cleanly and when you want it to. It will even blip the throttle beautifully while it’s at it. But stay on the accelerator, and you get a clunky, jerky old shift. Many boy-racers on the track were constantly making these clunky noises as they banged their way to the redline over and over. In sport mode, the e-gear holds on to the gears – it will let you bang your head off the rev limiter if you aren’t watching your tacho. Which I wasn’t, because the traction control light was distracting me. How could I be falling foul of the limit of traction in a straight line? 51 kgm? Oh right.

Totally shredded rubber on the car at the lunch break certainly looked impressive. Did I do this? The Lamborghini’s performance certainly leaves a big impression, and we’re not talking shredded rubber here. Drive one long enough, and you’ll want a bull logo tattooed on your bicep, name the kids after one and sell your soul to own one.After the race track experience, we were asked to drive to the scenic Saguaro Lake.  We got to try the Superleggera on the street (as opposed to the superslab). It thumps about a bit over the broken stuff, but as it turns out, it’s just the car telling you to go faster. The harder you go, the better the car feels. Until you see the blue lights flashing in your mirrors, that is. Then you go to jail, pausing only to email a pic of the cop standing next to the Lambo for his trophy wall. Which, I am happy to say, isn’t how my drive ended. We just rolled meekly into the hotel parking lot (if you can imagine rolling meekly into anything clad in a Lamborghini). I sat in the car for a while, gathering my thoughts and came upon a turn of phrase oft employed in Lamborghini articles. Grab the bull by the horns? Me? Why, that’s laughable. I am pretty damn sure the bull on the bonnet my grey car was laughing the whole time.