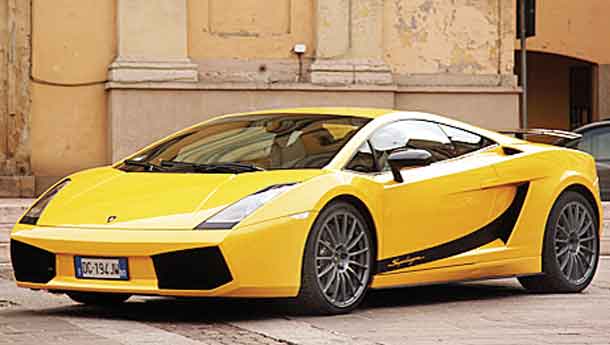 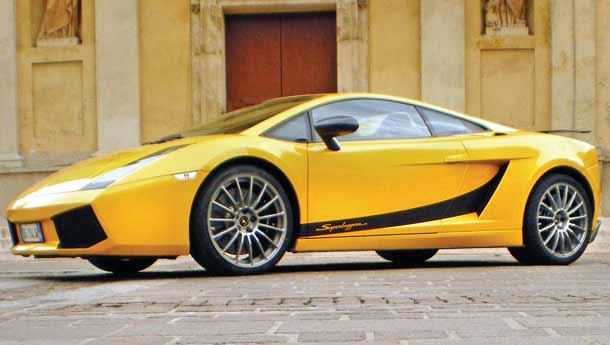 I‘m not a religious person; never have been. It’s the way I’ve been brought up, I guess. Temples, mosques, churches and other places of religious significance were never of much interest to me when I was younger, and of late I’ve looked at them purely in an architectural light. The frisson I feel when I walk into a magnificent cathedral or an ancient temple is touched off by a sense of wonder at the way it’s built; there’s no divinity involved, as far as I’m concerned. I’m happy to let others experience that part of it, frankly, and to be left alone to appreciate the drive, the energy, the sheer will it must have taken for someone to construct something like that. The archetypal agnostic, that’s me.

But... there are exceptions; there always are, in life. What if you were suddenly faced with the prospect of making a trip to Sant’ Agata, the home of Lamborghini? Wait, did I say ‘trip’? Do accept my sincere apologies – what I meant to say was pilgrimage. What if you were in Italy, along with a couple of colleagues from another auto magazine, and one of them said ‘Hey, we’re going to Sant’ Agata tomorrow, to drive a Gallardo. Why don’t you tag along, if you’re not doing anything else?’ Do you maintain a dignified mien, act cool and reply ‘Thanks man, that sounds like fun. I think I’ll take you up on that.’? Or do you, as you feel like doing, leap up and down, perhaps turn a cartwheel or two and plant a kiss on the fellow’s forehead? Thankfully, I saved the both of us considerable embarrassment by sticking to the former course of action, but there was no suppressing the geyser-like burst of excitement that whooshed through me. Go to Sant’ Agata, where arguably the planet’s sexiest, meatiest supercars are made, and get to drive one right there? Take a look around where it all began? Visit the museum, where some of the most legendary go-fast cars ever made are on display? I defy you not to be overcome by an almost religious fervour, in that sort of a situation.

The feeling of reverence only grew as we drove into the factory’s parking lot. We had driven there from Bologna in a Punto Abarth, quite a machine by itself, and had asked for directions somewhat sheepishly in the town – it was a bit like going to Agra and asking where the Taj Mahal was. The factory wasn’t singular, mind you, with the usual steel and glass frontage and unassuming concrete buildings in the back, but the sight of taped-up Gallardos and Murcielagos rumbling around the premises and on the roads adjoining the property – well, that’s the sort of vision that makes people believe in a higher power. We were welcomed by the delightful Claudia Schneider, press officer at Lamborghini, and soon found ourselves signing away our lives on indemnity forms (this was becoming something of a habit for me – refer my MV Agusta story in the Jan ‘08 issue). But hey, what a way to go,eh? Claudia must have sensed that we were straining at the leash, because she put us in the capable hands of a factory driver, and sent us on our way. He led us through a couple of doors and we almost walked into a yellow Gallardo Superleggera, freshly washed and spruced up and sitting there looking like a bomb about to go off.   What is it about a Lamborghini that stops you dead in your tracks? Is it the sheer physicality of the thing, the way the colour on it almost jumps at you? Is it the way it forces you to make ‘vroom, vroom’ noises as soon as you look at it? Perhaps it’s the way it manages to combine two wholly different personalities, the one a sharp, sophisticated, tuxedo-clad rake and the other a slightly deranged, hair-trigger mutant screaming ‘I will eat your children!’. Whatever it is, it would be hard to find a better attention-magnet anywhere. We were instantly surrounded by  Japanese school kids, local and foreign tourists and heaven knows who else, cameras and cell phones clicking away furiously, hands all over the car in a sort of semi-controlled frenzy. And this was inside the factory, a restricted environment; what on earth would people do when we were out on public roads?

Not very much, as it turned out. This was Sant’ Agata, where people probably saw Lamborghinis in their sleep – heck, our Punto Abarth drew many more eyeballs than the Gallardo. Not that it mattered to me; I didn’t have the benefit of staying in a town next to the Lamborghini factory, so I enjoyed every bit of the short drive from the factory to the town’s historic centre. The fact that every single Lamborghini model ever made, from the 350GT and the Miura to the Gallardo and Murcie, had driven down these very roads, exhaust burbles rebounding off the ancient walls, thrilled me no end – I was now a bonafide part of history. We drew to a stop in front of the town’s main church in order to take off a few photographs, and I took the chance to step aside and discreetly observe how the townsfolk reacted. Apart from a few old-timers, who carried on in rapid fire Italian, nobody really gave us a second glance; it was strictly ‘been there done that’ stuff. I found it slightly surreal, I have to say – here we were, with a blindingly yellow supercar, full of beans and hopping around excitedly, and nobody else seemed to care a fig. Not even when Bertie (from Overdrive) kneeled in front of the car, hands clasped in prayer, and offered thanks did anyone bat an eyelid. Obviously, we weren’t pioneering anything in terms of Lamborghini-induced behaviour.

Right, time to lock and load. Still shots done with, we followed the driver to a stretch of road where we could flog the car a bit. It wasn’t Nardo or the ‘Ring, but it was the nearest that we were going to get around the town. Bertie was immediately off like a rocket, while I stood by the side of the road taking pan shots. If every car made the sort of noise the Gallardo did, I can tell you I’d be happy to take pan shots indefinitely. It sounds clichéd, but the thing really produced an orchestra – a violent, bubbling, angry cauldron of an orchestra, just as sweet as any Philharmonic I’ve ever heard (not that I’ve heard many).  Every time Bertie roared past me, a body-blow of sound and shock waves would threaten to knock me over, and I couldn’t get enough of it – that is, until it was my turn to drive.

I know a lot of earnest sobbing and hand-clasping was seen when Audi took over Lamborghini (Oh, the shame of it! Germans running OUR Lamborghini!). This was understandable, since the very spirit of the enterprise was one of defiance and triumph in the face of adversity. When old man Ferrucio gave Enzo the middle finger and stormed off to build his own supercar, he immediately gained a legion of admirers for the sheer... er, testicular fortitude he displayed. For his company to be sold to the Germans... well, that must have hurt. However, I for one think it was a good move. If there’s one thing those Krauts know about, it’s quality, and quite frankly, pre-Audi Lambos were pretty dodgy when it came to interiors and the like. Not so this Gallardo and its ilk – everything about its interiors shout ‘Quality!’, not to mention the exquisitely built body. The real action, of course, is in the driver’s seat. Fasten the four-point harness, step on the brake, click the paddle-operated e-gear into first,check that the coast is clear, stomp on the throttle and brace for launch. All the usual descriptors apply after that: ‘pushed back into the seat’, ‘arms snapping straight out’, ‘ferocious acceleration’, ‘unreal grip’, ‘a howling engine’ and so forth. Really, I could write page after page about the intoxicating manner in which this car scorches the tarmac with its searing pace and the way in which it begs you to push it further, but it wouldn’t be of much use – the only way to understand it is to beg, borrow or steal one and drive it yourself (or to read Shumi’s detailed drive story in the May ‘07 issue of BSM). Much as I loved driving it fast (it truly is one of the great driving experiences), what I enjoyed more than anything else was slowing it down. This way, I could downshift and hear the glorious explosions bursting out of the exhausts – in fact, there came a point when I would nail the throttle and then immediately downshift, just to set off those bangs.   A few pulse-quickening runs later, it was time to head back to HQ (the Germans run the place now, remember?). A factory visit had been lined up; normally, these can be somewhat dry affairs, but this was different – we were about to get to the heart of the matter and see how these road-legal ICBMs were put together. To get to the factory, we had to pass through a yard where cars  ready for delivery were parked and... well, if your pulse rate is already at about 200 from driving one, to see nearly 40 Lambos of every possible hue in one place is almost too much. Once inside, it was time for more gaping. In a sense, to see a finished product suddenly reduced to its component parts can be a bit of a dampener – a lot of the mystique is literally stripped away, leaving very little to fantasise about. On the other hand, it was absolutely fascinating to watch a precision machine being  lovingly put together, bit by bit, bolt by bolt, until you suddenly had a 320 kph work of art at the end of the assembly line, as if by magic. As a matter of fact, it is magical to watch, and I only had to mentally replace the Gallardos and Murcies on the lines with Miuras and GTs to get even more of a kick out of it. I urge you, folks – guided tours are available of the factory, so do take one in your lifetime.

‘Shall we look around the museum now?’ we were asked. I, for one, needed no further prodding. Would you, if you knew that a Lamborghini Miura, the original  supercar, the most ‘beautiful car ever made’, awaited you inside? If that wasn’t enough, how about a 350 GT, in my opinion almost as lovely as the Miura, an Espada (the first Lambo saloon), a Jarama, the first (and last) Countach produced, the gigantic LM002... actually, every historical Lambo is in there,  including their short-lived F1 cars. It’s a spine-tingling experience walking around that museum – it’s like you’re re-living every second of the last 40-odd years,  smelling, hearing and touching a legendary company’s history.

Additionally, the  experience was made more special for me because I got to see all the cars after which every member of Team BSM has been named! My pilgrimage was truly complete; to end it, I knelt in reverence before the Miura, for Bijoy’s sake (as you know, his daughter is named Miura), and I realised that there is a God somewhere.

It’s just that this God has super unleaded running through their veins.