The German automaker has launched the 2016 update for its Polo hatchback and Vento sedan. The cars have been launched at price tags of Rs. 5.33 lacs (Polo) and  Rs. 7.70lacs (Vento). Volkswagen’s 2016 offerings remain mechanically unaltered, but incorporates a host of new features, which includes- a dynamic touchscreen infotainment system, Auto dimming IRVMs, rain sensing wipers, phone book/SMS viewer and mirror link connectivity. Feature updates are common to both Polo and Vento. The highlight amongst these updated features is the mirror link connectivity, which reflects the screen of your smartphone onto the infotainment display. The rain sensor comes integrated into the auto-dimming IRVM and possibility dictates that same features will make their way into the company’s upcoming sub-4 meter compact sedan, Ameo, as well. 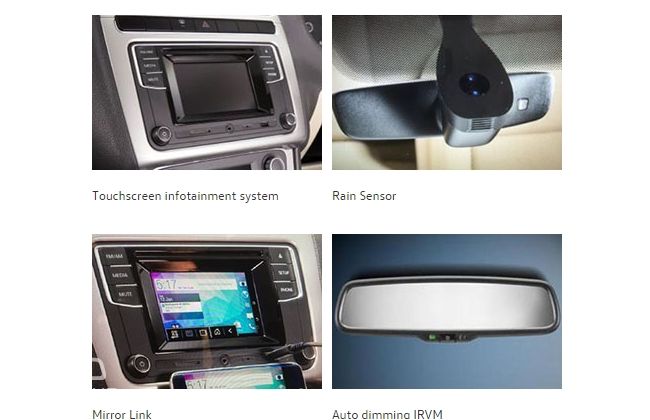 Speaking on the occasion, Director, Volkswagen Passenger Cars India, Mr.  Michael Mayer said, “Vento and Polo have been among our best-selling carlines since their inception in the Indian market, and I am delighted to announce the introduction of these additional features. Providing a further boost to safety, the rain sensor and auto-dimming IRVM features allows the occupant to drive with ease and convenience. We are optimistic of continuing to raise the bar through our brand new offerings, and further expand the growing Volkswagen family in India.”

Under the hood, Polo continues to feature the four engine options, which were seen in the pre-updated variant. These powertrain options include the 1.2-litre MPI and TSI (GT variants) petrol units and the 1.5-litre TDI diesel mill, which is available in two tunes of power output viz. 88.7bhp and 103bhp, respectively.

As far as Vento sedan is concerned, it only shares the GT tuned 1.5-litre diesel and 1.2-litre petrol mill, which can be seen are seen in the Polo hatchback,  but are tuned to produce 103.5bhp in this particular sedan. Also on the offer is a 1.6-litre  petrol variant, which also produces the same power output.

These feature updates will help the German automaker take on their competition. Polo has a broad spectrum of rivals which range from Maruti Swift all the way up to Abarth Punto Evo. Vento sedan, on the other hand will be taking on its rivals, which include the likes of Hyundai Verna, Maruti Ciaz and the market-dominator Honda City.