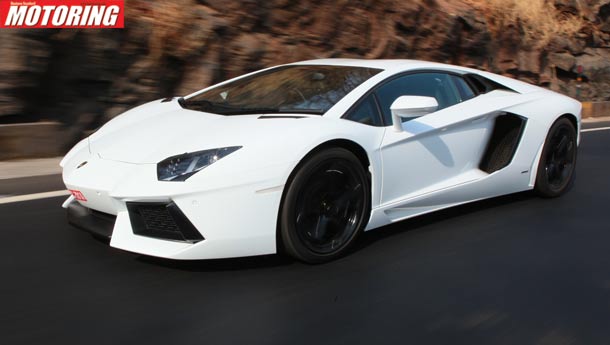 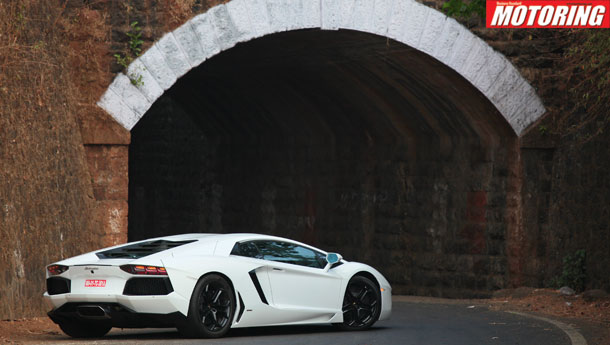 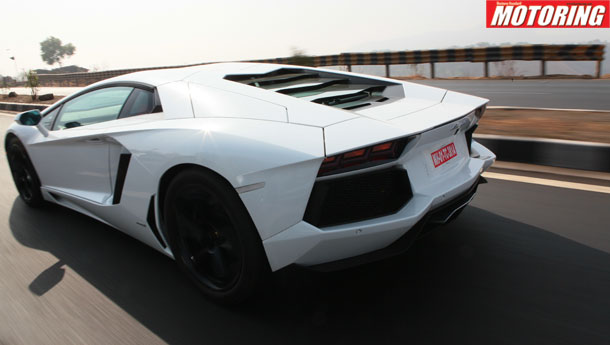 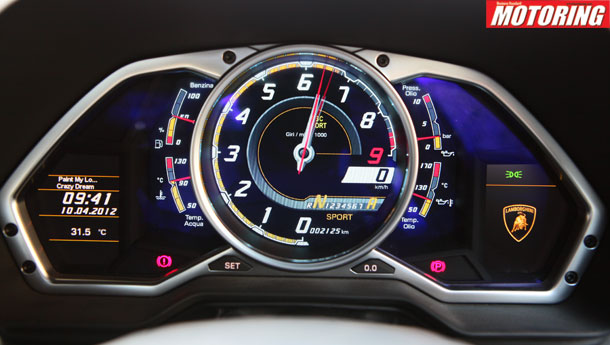 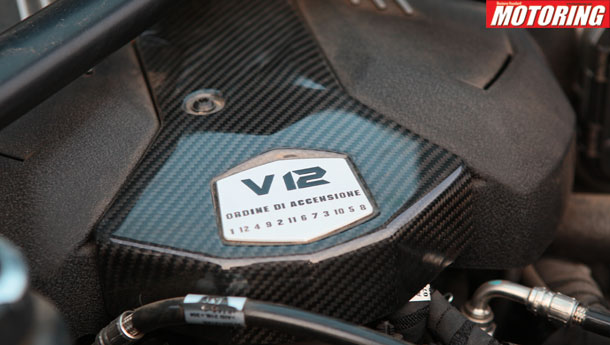 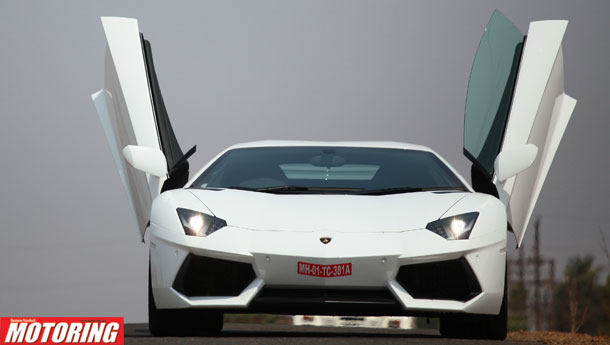 Does this car fly?’ Of all the questions I’ve been asked by curious bystanders while driving and photographing exotic cars, this one takes the cake, and the entire bakery. ‘I’ve seen one like this on TV – it was driving on the road and then it took off like a plane.’ I was about to gently disabuse the chap of this notion, but then I realised that he was probably right. Could I possibly blame him for thinking that the Aventador was actually an aeronautical product, more suited for trans-continental flight than terrestrial duty? I mean, just look at the bloody thing – it looks like it’s about to take wing at the slightest provocation, and with a top speed of 350 kph, the comparison to a flying machine seemed perfectly justified.

They should make it mandatory to have a pilot’s license, not a driver’s permit, to set foot anywhere near this outrageous car. A pair of extra-strength sunglasses is also recommended, failing which you’re likely to be left almost blinded when you first lay eyes on it. Has there ever been a hypercar (or any car, for that matter) with this many razor sharp edges? Just by walking towards it, my skin began to tingle in anticipation of being cut to shreds. From many angles, this car looks like its predecessor, the Murcielago, but that’s just a passing coincidence – in reality, it’s brand spanking new in every way.

The Murcie’s chassis was well known for basically being a bunch of tubes that somehow held together (just like in the Countach and Diablo); this car has a carbon-fibre monocoque, with two aluminium subframes bolted on, the one at the back nestling the monstrous engine. Heck, even the roof is of fully stressed carbon, all of this exotica helping to ‘add less weight’, as it were, and providing exceptional structural rigidity. The rear tail lights, when fully lit up, look smashing, and the piece de resistance, as always, is the nuclear powerplant that passes itself off as an ‘engine’, displayed in full glory under a (optional) transparent engine cover. You can almost hear it ticking, waiting for an opportune moment to explode into life and lay waste to all in its path.

You know what else you need to drive this car, apart from a pilot’s license and sunglasses? A neck the size of an oil barrel and a spine constructed entirely of titanium. Without these, the abuse that your body will be subjected to is of an epic level, although you won’t realise it at first, when you contort yourself through the scissor door and slither into the driver’s seat. The fighter-aircraft cabin tightly encloses you as you flip open the red cover that hides the start/stop button (another nod to aviation), and a long press of that button fires the 12-cylinder, 6.5-litre, 690 bhp, 70.4 kgm engine to life. It’s an all-new unit, given that the older 12-pot unit was too long in the tooth and unable to keep up with emission norms, and it eschews any sort of forced induction – in fact, it’s still indirectly injected.

On start up, the engine automatically revs to 3000 rpm, before settling into a surprisingly civilised thrum. At this point, you sit quietly for a while, absorbing the enormity of the situation (when was the last time you drove a 12-cylinder Lamborghini?) and pulling yourself together for the task at hand, which is to drive the car in anger and live to tell the tale.

A light pull on the up-shift paddle and you’ve engaged the first cog on the single-clutch automated manual gearbox (a dual clutch would have added too much weight). At this point, you can simply stomp on the accelerator and the car will burst out of the blocks in breathtaking fashion – but that’s for wimps. The real test of whether you have family jewels of steel is if you can turn off the traction control, select Corsa (track) mode, stand on the brake, raise the revs to 5000 rpm and let go of the brake pedal.

The violence that this manoeuvre produces is shocking, and even though your brain half-expects it, your body still won’t be prepared for it. With a shattering roar and a kick in the back that feels like you’ve been rear-ended by a freight train (remember: neck like a barrel, spine of titanium), the Aventador slaughters the tarmac and time-warps its way to 100 kph in 3.3 seconds, making it the quickest car we’ve ever tested. How’s this for a devastating fact – within the first metre, the Aventador is pulling 1.6g! The transmission, above 6000 rpm, goes completely mad, sledgehammering shift after brutal shift, snapping your neck back into the head restraint in a series of loud explosions; your eyes widen as you watch the speedo rack up licence-annulling speeds, your ears electrified by the primeval howl coming from just behind your head. You think that the engine will let up at least now – surely – but it keeps screaming its way through the rev range, causing a weightlessness in the pit of your stomach, an overworking of your adrenal glands and a nagging feeling that a spectacular fireball, with you in it, isn’t very far away.

A potent mixture of terror and exhilaration make you want to keep the throttle pinned, but that truck that’s rapidly being vacuumed into your vortex triggers a safety catch in your brain, making your foot stomp on the brake, activating those gigantic carbon discs and stopping you with just as much savagery. Phew. Why this orgy of sensations, this physical assault, then? Hypercars today are taking a more civilised route, providing staggering performance and a level of sybaritic splendour to go with it, so how come this car is the diametric opposite of that concept? This isn’t to say that the Aventador isn’t comfortable – in fact, this is the best-made Lamborghini cabin ever, even if it’s too Audi A6 in some regards; at this price point, a much more bespoke interior would have been welcome.

Still, the boiling rage inside that gearbox does seem rather extreme, especially in cojones-to-the-wall Corsa mode, even though Lamborghini explains it away by claiming that they want drivers to experience ‘emotional’ shifting. It’s emotional all right, the prevalent emotion being shock-and-awe.

The fact is, no matter what Audi does to make a more ‘civilised’ Lambo, the car itself will not allow its basic character to be altered – at heart, a Lamborghini is always likely to remain a machine that exists on a diet of nails and broken glass, a car that chews up and spits out those that can’t handle it.

The sooner you understand this, the better for all concerned – the car can get on with not mollycoddling you, and you can get on with, well, trying to hang on for dear life. Hanging on, by the way, is something the Aventador does incredibly well – there’s more grip on this car than in the Fevicol factory. Enough has been written in these very pages about the Aventador’s F1-derived pushrod suspension, so I shan’t get into too much detail about it. It just works, brilliantly. With the passive Ohlins dampers inside the chassis, unsprung weight has come down, giving a massive level of suspension refinement. Make no mistake, the ride quality is still unforgiving, but when you drive this car fast, really fast, the levels of handling and traction are inter-galactic.

No matter what mode you’re in Strada (road), Sport or Corsa (track), the feedback from the steering wheel is rich, lucid and, to use a cliché, telepathic – it really does figure out where you want to go before you’ve done it. There’s mild understeer in Strada mode, but in Sport, the steering’s all set for wild power-oversteer antics. Corsa sees you ready to start shredding lap times. The all-wheel drive system becomes especially evident in Corsa mode, where, apart from a much heavier steering, you can actually feel the front wheels pulling you through corners. The traction control kicks in a mite early, but you can still go stupidly fast through corners with it turned on – I wouldn’t want to speculate about the results if you chose to turn it off. For all its ferocity, this is quite a playful car, and it responds amazingly quickly to your inputs, cornering completely flat and coming to a halt in a heartbeat, thanks to those huge carbon brakes.

The Aventador, really, is a bagful of contradictions. It’s maddening to drive slowly, yet absolutely sublime at speed. The engine is the most civilised yet on a Lamborghini, but it’s still a vicious beast. It’s the easiest Lambo ever to drive, yet still a handful and a half – your body will feel the strain very quickly. The cabin’s the best one yet, but the rear-view is still like peering through a key-hole. It’s wildly impractical as an everyday supercar, and there’s about enough storage space to put a neatly folded handkerchief, but it changes character completely out on the open road, becoming a deadly weapon. In short, it’s still a Lamborghini through and through, and it’s one of the most amazing pieces of four-wheeled machinery ever made. Even if it’s way too hardcore for someone like me, I have no choice but to bow before it.