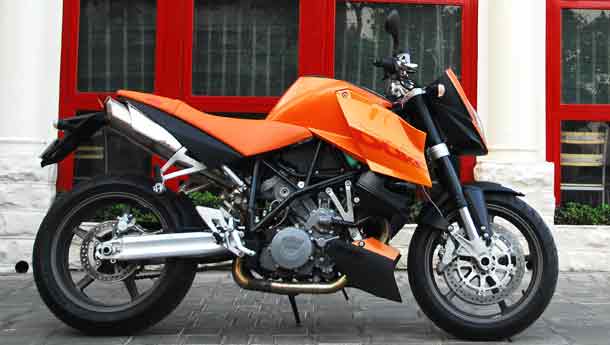 Lethal, sedate, scary, sexy, orange, cool, wild, fugly, exotic... these were words that floated around in my little cranial cavity as we pulled up near this little monster. And it is little, I kid you not. ‘It’s just like a Bajaj Pulsar, you know. Some people even think it’s those modified Pulsars and my wife and father laughed at me when I traded in my Fireblade for this. They said I was mad.’ The gentleman saying all of this was Dr Cyres Mehta. An eye-surgeon by profession, he’s one of those rare breed of people renowned for their eccentricity, and the motorcycle is even more exotic – it’s the KTM Super Duke. And I beg to differ from his wife and his father, because I have my own reasons to doubt this man’s sanity. ‘It’s a S.U.P.E.R D.U.K.E, for crying out loud – it’s utterly blasphemous to even utter the P word in the same sentence!’ I said to him, before I fastened my helmet strap and tightened my gloves.

The Super Duke is an extremely different motorcycle – different in a... well, different kind of way. It’s a naked, it looks exotic, sounds subdued, is totally mad and is tons of fun. Er, not a very coherent description, is it? But what to do, it’s true. KTM first had that superb thumper of an engine in the form of the LC4 (BSM ‘06). Then they improvised by taking two LC4s and got themselves the potent LC8, which they put into the 950 Adventure, their first on/off-street offering. And for those who weren’t satisfied with that, they took the LC8, grew some hair on its chest, gave it bigger lungs and super sized the whole package to this, the Super Duke. See, usually I remain quite composed before I get on to a new motorcycle. I take my time to observe little details and ease myself into the machine, but this bright orange piece of livery was yelling at me to jump aboard and give it a spanking. Er, that didn’t come out right, did it? But that’s probably how Gerald Kiska, the guy behind the design of this Duke, intended it to be.

Irresistible, sexy, just like Keira Knightley with all the right lines in all the right places and the curves yet to be unveiled. The polyamide fuel tank is cut so perfectly that your knees tuck in unobtrusively right behind the flanks, while a small engine cowl adds to the street fighter look. Slash cut exhausts exit from under the seat and the highlight is one of the sexiest rear ends to ever don a street machine. I couldn’t resist, so I took the plunge.Unlike KTM’s singles, the Duke has no decompressor. A simple black button powers the twin to life. A gentle hum at idle is a misrepresentation of what 56 kg of the most sophisticated bits of metal are capable of doing. Banked at 75 degrees, forged pistons travel the length of the cylinders to unleash a staggering 118 bhp at a mere 9000 rpm. And we’re talking about a twin here, the lightest, most compact, most powerful twin your money can buy outside of Italy. With 10 kgm on tap at 7000 rpm, the powerband is characteristic of a Vee – potent and useable. And to put that into perspective, it’s just like the dreaded P-word, multiplied a hundred times.

This superb engine is set inside a chromium-molybdenum trellis that weighs in at less than 10 kg and has some world class bits bolted on. KTM have a reputation for making everything in-house or bolting on only the world’s finest. This is why the 48 mm WP upside-down units find their way on to the front end of the Super Duke. Variable preload, adjustable compression and rebound damping and 135 mm of travel lets the front end absorb every little ripple our roads have on offer. A big white WP spring at the rear is attached to a damper that has enough  knobs and valves to keep your bum comfortable over any terrain. Fiddle around and you can stiffen it up, and I’m sure the Super Duke will then be able to run circles around the naked Jap machines.

The perch is pretty high and although it looks like a narrow MX-styled seat, it’s surprisingly comfortable and keeps your feet on the ground. The handlebar, a striate tapered aluminium Magura, has all the buttons in the right places and doesn’t intrude. So all you’ve got to focus on is having fun. Clunk first, ease out and I rolled out slowly. The tracking car pulled ahead as I adjusted my stance and gassed it to catch up. Whoaa!

The engine sniffed the opening of the throttle, the throttle bodies welcomed the atomised fuel with glee and the injectors spat it into the combustion chamber with a vengeance, taking the front wheel into the air and the handle bar to a slapper. I held on for fear of my life and passed the car before I could react. Forget throttle response, even bacon at breakfast has never been so crisp. When KTM bored out the LC8, they got Keihin to develop a fuel injection system along with an ECU that was programmed with KTM’s engine maps. The combination, I must tell you, is quite hell-raising and it sets off all kinds of alarms in your body’s disaster management system. But get the right wrist under control and you’ll learn to enjoy the Duke, because it is calm when it’s under control and in trundle-around-town mode, but when you decide to push the limits, it opens up another dimension to motorcycling. Vision starts to blur, corners straighten out and the brow begins to sweat. This madcap is capable of surpassing the double ton, but fear not for your life, my friend, because it comes equipped with two 320 mm fixed Brembo callipers up front and a floating rear calliper at the rear. The front rotors are so big they almost look like five spoke alloys, but functionality over looks is never a bad thing. And as I went through a couple of deceleration runs, my innards almost left the Super Duke and my skin for dead.

The perfect street fighter, you ask? Almost, I’d say. It’s comfortable, fast, exquisite, and is engineered by KTM – the guys who make some of the most exciting machines around. The Super Duke is a motorcycle that you’d never want to take home either, because you’re having too much fun or are ashamed that your wife will ridicule the headlight that was designed by Babe Ruth’s baseball bat. Almost perfect.