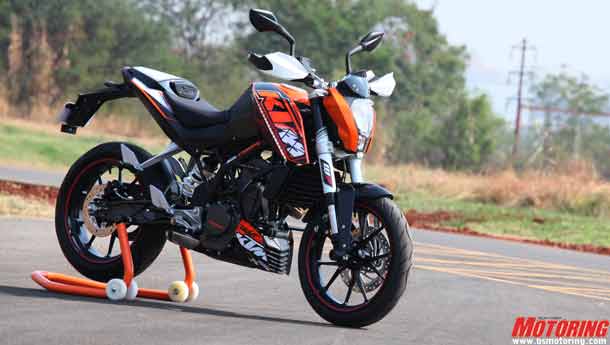 After the initial success of the mini street motorcycle produced at Pune but sold in Europe, KTM Power Sports AG, one of Europe's largest bike producers, has charted a series of new product developments with its India partner, Bajaj Auto.

The Austria-based two-wheeler major is developing a high-capacity motorcycle in partnership with Bajaj Auto, India's second-biggest two-wheeler producer, in addition to more platforms for newer models for the future.

Engineers of KTM and Bajaj are developing a motorcycle powered by a 375cc engine at Bajaj's research and development center at Akurdi, Pune. This model could have one of the biggest engine capacities fully produced in India after the Royal Enfield models.

A small capacity motorcycle, the 125 Duke, produced by Bajaj Auto and sold by KTM in Europe, has been a runaway success, pushing unit sales and revenue of the European company higher than last year. Pune-based Bajaj Auto, which holds a little more than 47 per cent in the foreign company, manufactures the 125 Duke at its plant in Chakan, Pune.

Besides, KTM is working with Bajaj on two vehicle platforms for the future. The work on these started last year. It is, however, not clear what models would be developed on these platforms. Both companies had jointly developed the platform for the 125 Duke more than a year before.

Bajaj progressively replaced the 125cc engine on it with a 200cc engine and launched the same in India in January, pricing it at Rs 1.17 lakh (ex-showroom, Delhi). KTM expects to sell 20,000 units of it in India.

In what could be a first for the Indian market in recent times, KTM and Bajaj are working on a twin-cylinder engine platform that could subsequently make it to actual production at a later date. Such motorcycles are priced at a substantial premium to other commuter bikes.

While all motorcycles fully produced in India are powered by single-engine technology, twin-cylinder engines would give the motorcycle additional power and greater performance. Though, mileage figures would be an issue with such high capacity premium bikes.