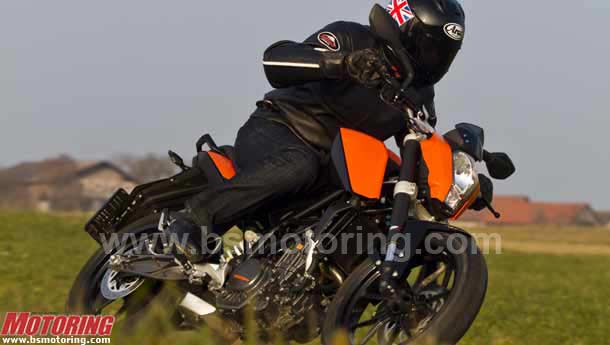 Bajaj Auto Limited, the country’s second-largest two-wheeler maker, is all set to power its newly-launched Duke 200 – a naked style street fighter motorcycle from its Austrian partner KTM’s stable – with the launch of KTM's Power Parts and Power Wear accessories and merchandise soon.

Delivering the first 15 Duke 200s to customers in Hyderabad, Muktibodh said the bike, priced at Rs 1.2 lakh (ex-showroom, Hyderabad), was positioned in the higher-cc bikes market where Yamaha R15 and Honda CBR 25R together sell 2,000 units per month in the country.

Bajaj Auto, which holds close to 40 per cent stake in KTM through its Netherlands-based wholly-owned subsidiary Bajaj Auto International Holdings, is already exporting KTM bikes from its Chakan plant in Pune to Europe. It supplied around 11,000 units of Duke 125 cc in 2011.

According to Amit Pawar, zonal manager, Bajaj Auto, KTM Duke 200 had so far seen 100 bookings in Andhra Pradesh and the number could be a little over 1,000 units from across the country.

“The Bajaj-KTM partnership is focused on developing high-cc bikes. Next in line from the KTM series to hit the Indian roads will be the Duke 350 cc, 690 cc and 990 cc bikes,” Muktibodh said, while declining to give any definitive time lines or numbers.