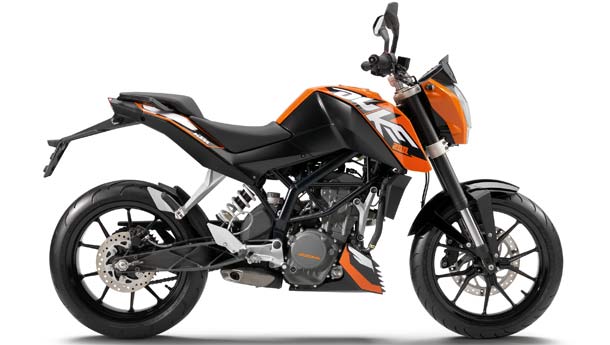 Bajaj makes good performance bikes. KTM makes top-notch hooligan bikes. Then, a bike designed by KTM and made by Bajaj right here in India should be a hoot to ride, eh? Not to mention light on our pockets!

Yes, the first fruit of the Bajaj-KTM synergy is almost here, and it promises to be a cracker of a motorcycle. Details of the Duke 200 were revealed to the press at the ongoing EICMA Motorcycle Exhibition and the bike will be launched in India in a couple of months’ time. And why are we so excited? After all, we already have the Honda CBR250R to satisfy our power cravings, right? However, the KTM Duke 200 promises to be a different breed of motorcycle, the first of its kind in India.

First off, it displays thoroughbred KTM styling, which is to say that it looks strikingly European, shows KTM’s family genes and displays more than a hint of supermoto proportions - ideal for our concrete jungles. Then there’s the genuine kit on offer - 43 mm USD forks, a trellis frame, rear monoshock, underslung exhaust and fat tyres. If it’s street cred you need, the Duke 200’s got it in spades.

And at the heart of the matter is a liquid-cooled, four-valve, single-cylinder motor that pumps out 25 bhp - the same as the CBR250R. However, what defines the Duke 200 is its lightness. With a kerb weight of 125 kg, it sets a new power-to-weight standard in the 200-250cc segment with 200 bhp per tonne! That should have the 167-kg CBR250R worried.

Going by the Duke 125, since chassis, suspension and wheels are unchanged for the 200, handling should be a delightful affair on the Duke 200. The combination of light weight and quality cycle parts will make the Duke 200 a scalpel in corners, and we see few motorcycles coming close to it when the road starts twisting.

And the Duke 200’s pricing seems set to give the Honda more sleepless nights.While Bajaj hasn’t made an official statement of the Duke 200’s price tag, a logical estimate would peg it somewhere between Rs 1.2 to 1.35 lakh. If it indeed turns out to be true, expect an orange cat to be set amongst the Japanese pigeons. Everything from the Yamaha R15 to the Honda CBR250R will find themselves in the KTM’s crosshairs.

Even more than being an enticing proposition to ride, the Duke 200 will diversify the Indian motorcycling market, providing enthusiasts with an option that will likely prove to be fun to ride and easy on the pockets as well.