KTM Duke 390 expected to show up at EICMA Motor show 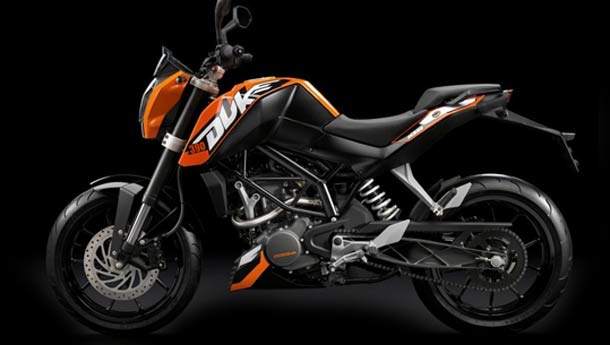 You’ve known for a while now that the bigger brother to the popular Duke 200 was on its way in 2013 and we’re expecting it to be shown at the upcoming EICMA motor show, scheduled to start on the 15th of November. It’s apparently called the KTM Duke 390. Or 350, whatever might be the case. Knowing KTM’s naming convention for their streetbikes, it will most probably be called the KTM 390, like its bigger 690 or 990 cousins.

In a leaked dealer presentation earlier this year, KTM did mention the KTM Duke 350 along the bigger 1090 Adventure R and the mad-as-a-hatter Superduke R 1290. Now, this motorcycle, if it is indeed what the rumours make it out to be, it’s going to be one helluva motorcycle. Rumoured specs? Well, according to the blokes at Zigwheels, it will weigh 150 kgs and the 375cc liquid-cooled, four-valve, fuel-injected single will hammer out close to 45 horsepower! That makes for a staggering power-to-weight figure of 300 bhp/tonne! To put things into perspective, the KTM Duke 200 manages 184 bhp/tonne and it’s one quick motorcycle.

We believe KTM-Bajaj will carry forward a majority of the 200’s components, including the trellis frame, the WP suspension, the Bybre brakes and rest of the equipment. However, since the power is considerably upped in this case, it might just feature enhanced braking capability or better tyres. And we believe KTM should also incorporate some styling changes to make it look more premium, since the buyer is going to be paying a lot more than the 200. The tastiest bit? Well, if rumours are to believed, the machine will have a price tag close to the Rs 2 lakh mark and if all these things turn out to be true, it might just be the best sub-400cc buy out there. We cannot wait!