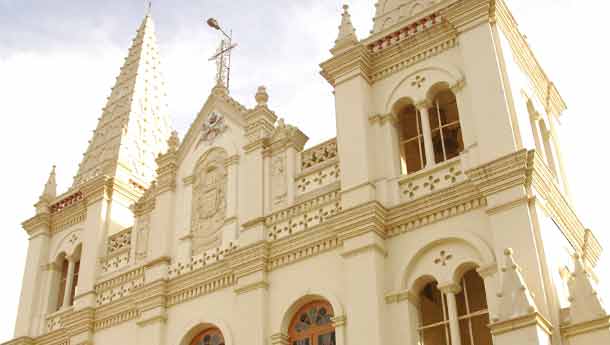 With all due apologies to Malayalis who drive various kinds of vehicular transport, by far the looniest drivers I have encountered in all my travels are in Kerala. This is not to say that there aren’t similarly nutty drivers in the rest of the country (Delhi, and now Bangalore, leap to mind). It’s just that in Kerala, automobile insanity seems to be just as much a part of everyday life as coconut oil and octogenarian communists. Take my taxi driver, for instance. He had barely turned out of Kochi airport and onto the highway leading to the city when he floored the gas pedal, a state in which it remained for the next 35 kilometres. In a performance sedan, this might have been an agreeable experience, but an old banger with no brakes? A job testing land mines seemed safer to me at that point.

Displaying a refreshing disregard for life and limb (his, mine and the world at large), our daring hero played chicken with buses and trucks, took tailgating to a whole new level, didn’t so much cut lanes as dismembered them, shot red lights, cursed out pedestrians and used the horn like a deadly weapon. Whatever transgressions he didn’t commit on the way in were taken care of on his return leg, I’m certain of it. The scariest bit, however, was that lots of other drivers were doing much the same sort of thing.
As a result of this local Evil Knievel’s hair-raising antics, I barely managed to get a look at my surroundings on the way in. Ernakulam, one of present-day Kochi’s three constituent parts (the others being Fort Kochi and Mattancherry) looked like any other boom town – slightly unruly, full of glistening new buildings and cars and people in a hurry – but as I crossed over the backwaters and hurtled toward Fort Kochi, the scenery changed dramatically. Water always has a calming affect (unless, of course, you’re in the middle of the Mumbai monsoon), so the sight of the backwaters immediately lowered my blood pressure a bit. Within minutes, the sameness of Ernakulam was but a blur in the window, as the driver screeched into the charming confines of Fort Kochi.

The name Fort Kochi is currently a bit misleading, owing to the fact that there’s pretty much every sort of monument here except a proper fort. You’d have to go back to 1503 to see the fort that the Portuguese were given permission to build by the Raja of Cochin. That old rascal Vasco da Gama, the first European to set foot in India, led a wave of Portuguese colonisers who were, strangely, not terribly concerned with spices and the like but who were more interested in saving the souls of the heathen natives. This is usually a very bad sign, since in those days one of the ways they ‘saved’ a soul was to exterminate the poor soul altogether. Of course, now that they were here, they began making vast profits in the spice and textile trade as well. To cut a long story short, the Portuguese hung onto Cochin for almost 180 years, until the Dutch came along and booted them out in 1683, demolishing said fort and several catholic churches while they were at it. They in turn found themselves on the wrong end of a boot in 1795, when the jolly old Brits gave them a bit of a whipping. When India finally gained independence, most of Cochin had been under foreign rule for almost 450 years, which is a long time by anyone’s standards.

The result of these firangi  antecedents is that Fort Kochi is the most wonderful mix of cultural and architectural influences. It’s difficult to believe that technically, it’s part of the same city as Ernakulam. The two are so strikingly different as to be almost planets apart. Fort Kochi is all old bungalows and churches, narrow alleys, greenery and sleepy afternoons to Ernakulam’s hustle and bustle. Heck, my hotel was a 300-year old Dutch bungalow, which is not something one can often boast of. I was currently the only guest in it as well, always a good thing.

Fort Kochi is tailormade for walking (a car would only be a nuisance on its narrow streets), so I set out for the St Francis church, barely two minutes down the road. It was one of those steamy, pre-monsoon mornings, which meant I was quickly soaked by the time I had taken fifty steps. Still, the place had such a laidback feel to it that I was willing to excuse a little heavy perspiration. Every house on the road
down from my hotel looked at least a few hundred years old, with history fairly oozing out of every pretty window (most readers will have gathered by now that I have a thing for photographing doors and windows), none more so than Vasco House, where da Gama had apparently lived.

The church, built in typical bell-shaped Portuguese fashion, had a decent sprinkling of visitors that day, most of them noisy in that typically touristy way. It was the first European church to be built in India, way back in 1503, a wooden structure that was later rebuilt in stone. A pleasant little structure, it had beautiful lace hand punkhas inside and although not grandiose by any means, it’s an important part of Indian history. Vasco da Gama was originally buried here, until his mortal remains were shipped off back to Portugal. His headstone is still here, and it’s difficult not to look at it without realising that for all his many faults, he contributed in no small way not just to the history of India, but of the world as well.

Fort Kochi’s other famous church, the Santa Cruz basilica, was around the corner and I ambled over to have a look. Now this was a church – tall, imposing, immaculately maintained and with a definite air of authority about it. It started life as a humble church and was proclaimed a cathedral in 1558. After the British rather rudely demolished it in 1795, it was rebuilt in 1887; in 1984, Pope John Paul II declared it a full-on basilica. Whatever its iteration, it was a most impressive structure, I can tell you.

Lunch time saw me gravitate to the grand old Brunton Boatyard hotel, whose restaurant, I had reliably learnt, served up delectable local cuisine. I’m happy to report that despite some startling pricing policies (‘I’d really just like to have lunch, not buy the hotel’), the food was outstanding. The menu was a mini history lesson all by itself (the restaurant was called History, by the way), with dishes representing every epoch in Kochi’s past. The Jewish chuttuli meen was excellent, as was the very Anglo-Indian Dak Bungalow mutton roast, and I left the premises considerably cheery of spirit and light of wallet.

No visit to Kochi is complete (now there’s a clichéd line for you) without a trip to the old Jewish quarter of Mattancherry. The Jews first came to Kerala as far back as 700 BC, to get a piece of the trading action. Before long they had established a settlement in Kochi, built themselves a beautiful synagogue and were living in perfect harmony with the locals. The Portuguese then came along and went on a persecution spree, destroying the synagogue, but the rather more tolerant Dutch restored status quo and helped rebuild it. It’s the oldest such structure in the Commonwealth, and a fascinating place to boot. Getting there is a treat in itself; you pass through old marketplaces that still look like they’ve got Portuguese and Dutch traders shuffling around in their innards. The synagogue’s tucked away in a quiet corner, with a beautiful clock tower abutting it. Unfortunately you’re not allowed to shoot pictures inside, so I can only describe what it’s like – lovely, in a word. Hand-painted porcelain tiles from China cover the floor, Belgian chandeliers adorn the ceiling and there’s even a rug gifted by Haile Selassie, the last emperor of Ethiopia. There are barely 50 Jewish people left in Kochi, but at least they have a great place to worship in, eh?
‘We coock, you bill happy’, said a sign on one of the shacks on Fort Kochi’s seaside promenade, and never a truer word was said. You see, these fine establishments rustle up some mean curries, grills and fry’s with the fresh catch that you pick up from the nearby fish stalls, and I can guarantee that they cook and you feel happy. Even if you’re not eating anything, it’s worth a stroll just to see the amazing Chinese fishing nets that have been the de facto ambassadors of Kochi tourism for years now. It’s almost hypnotic to watch the slow, measured manner in which these cantilevered behemoths are operated, although I have to say that the resulting harvests are a bit disappointing. I mean to say, when you make such a spectacle of the process, the least you can do is net a minor whale or a school of swordfish or something. Nevertheless, it all tastes astonishingly good, which is the main thing. I’m not sure if there are more pleasurable ways to end a day than to sit by the seaside, watch the sun set and eat a mound of succulent grilled prawns, but if there is I haven’t quite found it yet.

Kochi is without doubt one of the nicest places in Kerala, which is saying a lot because it’s such a breathtakingly fecund state. Fort Kochi in particular is hard to beat – you’d be hard pressed to find such a mixture of architecture, culture and culinary delights, all packed into a relatively tiny space, anywhere else in the country. As said earlier, the best way to see it is on foot. Set out nice and early to get a feel of the place slowly waking up. Apart from the two major churches, there are quite a few smaller ones that are worth a look. The Dutch Palace in Mattancherry, just before you get to Jew Town (yes, it’s really called that), has an interesting museum as well as some fabulous murals depicting various scenes from the Ramayana and Mahabharata. Architecturally, buildings like Delta Study, Koder House, Bastion Bungalow, the Old Harbour House and the Pierce Leslie Bungalow are of particular interest. You could hop on a ferry and head to Vypeen island, where there’s a very nice beach to swim in. The History restaurant at the Brunton Boatyard hotel is excellent, though pricey. Kashi Art Café does divine homemade cakes and small meals, all very easy on the pocket. A freshly prepared fish dinner at the Chinese fishing nets is touristy, but a must!